originally posted by: noonebutme
...swearing that I would not divulge that AugustusMasonicus goes commando under his Illuminaughty goat robe and mask.

The airflow is refreshing on a hot sacrificial evening, you should try it.

I would, but my Lodge mandates Cthulhu underoos and I'll be damned (pun intended) if I'm going to upset ol' SquidFace

originally posted by: VictorVonDoom
So there is no requirement for a Mason to help a fellow mason if requested? There is no oath to that effect?

Straight from an actual Masonic handbook. The second paragraph is given to all Entered Apprentice Masons, it is covered immediately upon initiation so there is no confusion: 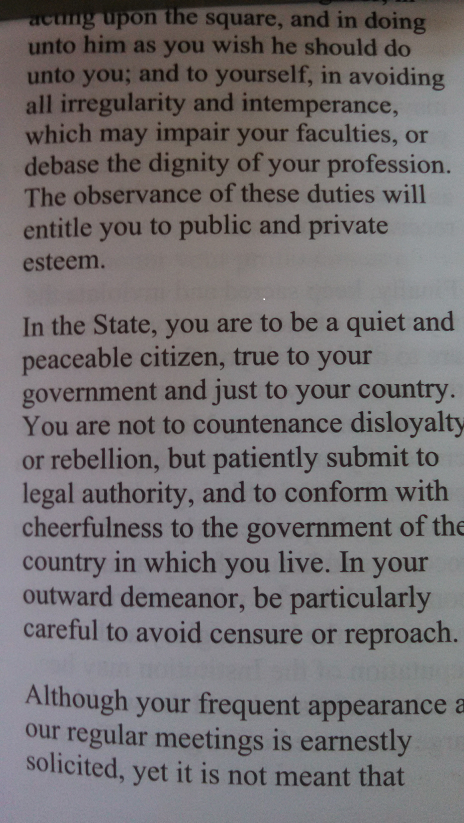 edit on 27-8-2016 by AugustusMasonicus because: Iä! Shub-Niggurath! The Black Goat of the Woods with a Thousand Young!

Now show us the bits about wearing goat heads and sacrificing virgins to Cthulhu.

posted on Aug, 27 2016 @ 09:59 AM
link
The question that the IPCC will be asking is whether or not David Duckenfield was promoted to a position he was unqualified for because he had friends in the Freemason's. After all it does help knowing people. There was a large-scale cover-up afterwards and many policeman were Freemason's. Coincidence maybe but as I say the story here is that the IPCC are investigating the links. The decisions made by people at the top don't reflect on the hard-work put in by the majority - same as any organisation.

Anyone getting offended - surely it is important for everyone in the organisation to know whether there were corrupt influential people acting against the 'code' in the past, and maybe still are now...

originally posted by: twfau
Anyone getting offended - surely it is important for everyone in the organisation to know whether there were corrupt influential people acting against the 'code' in the past, and maybe still are now...

If there were Masons acting unethically they should be expelled, whatever the reason.

originally posted by: Kester
a reply to: artistpoet

My grandfather was a Scotland Yard Detective. He wasn't impressed by the cowardly, conniving, evidence planting freemason bunch of crooks he worked with.

Well said, sadly a part of Police life for a very long time, indeed the checkerboard pattern on British and most commonwealth police hat's and uniform's is at least inspired by the Masonic floor tile's found within the majority of Genuine mason lodge's.
It is also accepted that Peel was himself a mason but I don't knot how true that is.
There is ample evidence of collusion and corruption within the police, a former MI5 operative I used to work with (he had long since retired and was working just as a little extra pocket money but more for something to do with is spare time as he was well catered for as far as his pension and other income's were concerned) told me some eye openers about police, a large mansion which THEY did not own but used as the MASON's had appropriated it for themselves (not bought it or owned it) and how the chief constables of more than one force would attend high level masonic gathering's at this hall back in the 1970's and the 1980's.
Some thing's I shall not repeat but let's say definitely underhanded and not above board.

There are GOOD lodges and BAD lodges, GOOD mason's and BAD mason's.
I admire your lodge's if they are so moral and would have nothing at all against SUCH order's and brotherhood's.
Sadly when the rot set's in it become's a part of the fabric, it does not mean the lodge itself but that clique in the corner whom form there own group within the larger group, those with vested interests in there contact's and the old fashioned exchange of idea's and covering for your brother's action's against non brother's.

I have yet to see any evidence of systemic corruption in any regular lodge.

There are many Mason ATS members reading this now...and wondering wtf this is going on about.

At least its clarified clearly its not referring to ALL Masonry members...otherwise you'd be insulting a lot of us.

Ever stopped to think that you may be the one in the minority?
Now clearly all freemasons are not evil but you can surely only speak for your lodge, try coming to where I live where all the masons are easily identifiable (I live two doors from the lodge and the Car park is directly opposite my house) as the richest in the town, that own all the land and try to cut down any one trying "make it" No conspiracy, also no coincidence.

They scratch each others backs, as you admit freemasons do.

Are you a member of the same lodge as the one in the article? No? Therefore you can't give an accurate description of the people or their methods.

Then that 'clique' in the corner are no longer Masons by definition of their actions and behaviour.

If we had people like that in my lodge they would be found out very quickly and expelled.

But, to further your line of thinking -- you're almost implying guilt by association; that if you're a freemason, and some people who are freemasons have done wrong, implies the whole organisation is corrupt.

I could say the say thing about Catholics and Christians -- the entire clergy, as well as their church going audience are nothing but pedophiles, given the massive cover up of child abuse done by priests.

But I wouldn't ever say or think that because I know it isn't true and that a few bad apples DOESN'T mean the whole cart is rotten.

You DO make good point's, I am not a MASON but my grandfather was a senior orange lodgman, not certain if that is the same as a regular mason though and he was a senior intelligence officer in the british army and later a senior officer on the RCMP's.

As for them being kicked out your lodge is therefore an above board group but sadly it is not always the case.

You mentioned you have visited lodges all over the world, come over to Lancashire England and visit the Burscough lodge, the Grand Master has a habit of arranging thing's for his friend's there, I know of one poor guy whom has ran foul of that particular lodge as well and another whom has encountered problem's with them after a boundary dispute with his neighbor whom was a long time member.

OK Burscough is a little like an English version of a hillbilly town and everyone is related to one another there with the Police even referring to them as the Burscough billy's but nevertheless most of them are decent folk but this is defintely a case in point.

Now extenuating circumstances do come into play because it may be more a matter of community and relative's and the Masonic lodge they happen to be a part of not acting normaly as a result but you get my drift on this point.

originally posted by: LABTECH767
I know of one poor guy whom has ran foul of that particular lodge as well and another whom has encountered problem's with them after a boundary dispute with his neighbor whom was a long time member.

Anecdotal stories like this are hard to prove and even harder to disprove since they are based solely on opinion.

If you have evidence of illegal activity have you reported it?

Hard to prove I worked there for over twenty years, come off it.

originally posted by: LABTECH767
Hard to prove I worked there for over twenty years, come off it.

Oh I would love to post first hand account's from these two victims' but I do not have that documentary evidence, note the level of argumentative stance you are making to protect your precieved brothers.
Men who by the way if it was in there own interests would probably happily slit your throat mason or no mason.
By the way they are one of the Thumb press one's.

originally posted by: LABTECH767
...note the level of argumentative stance you are making to protect your precieved brothers.

So asking questions is 'argumentative'? Too funny. You always this sensitive?