posted on Aug, 26 2016 @ 11:19 PM
link
Awesome thread.
I thought I knew of most of the faked Elvis death theories but I now know i was but an amateur!
Fun Thread. Long live the King!

posted on Aug, 27 2016 @ 01:04 PM
link
Thanks for providing some much needed content..
Well researched and presented.. star and flag from me and hopefully you got a few applause from staff as you deserve it.


....I also think in some cases people just don't want to accept the loss of someone very important to them. Convincing themselves that the person is still here is a protective device of sorts and keeps them from facing the truth, that the person has passed on.

To be honest I am no fan of Elvis he was before my time. But I appreciated the guy was an immense talent and paved the way for the generations that followed.

So I agree. It is very difficult for some people to let go and believe their heroes are gone. Especially when they pass at a relatively young age like Elvis did. Nowadays people like the Rolling Stones, McCartney etc.....keep on rocking into their 70s. But back in the 1970s Elvis was already becoming the grandfather of rock'n roll and probably concerned how he could possibly carry on. Especially with his medical problems and daily doses of drugs.

I don't believe he faked his own death myself. There is plenty of evidence pointing to Elvis being dead. Although I really never found out why they used "Aaron" on Elvis's gravestone.

originally posted by: texas thinker
Awesome thread.
I thought I knew of most of the faked Elvis death theories but I now know i was but an amateur!
Fun Thread. Long live the King!

Oh I think this is like the Paul McCartney is dead stories. It's not really something (most) people believe. But there are little clues that have been assembled to give the story an air of believability on the surface.

So yes this was meant to be a totally fun thread with no other aim than to take people away from the heavy political debates. 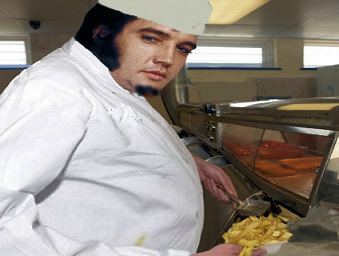 posted on Aug, 28 2016 @ 08:22 PM
link
Well presented.
I was never really an Elvis fan, although looking back on him in these videos I can see the fascination with him.

I remember where I was when I heard the news. How those around me were in shock. I was just like really? He was that famous? In my timeline he had never been that famous until after his death. I didn't grow up listening to his music so this may be why I missed it. My step mother would watch his old movies and that was the only reason I'd even heard of him!

I know quite a few Elvis look alikes, so I find it easy to think others might think they've seen him.


Most of the 'evidence' for him being alive seems like people were just mistaken. I'm intrigued by Priscilla tripping up , but not hearing it in its full context, it's hard to evaluate that one.

I must say I always thought his middle name was spelt Aaron.

Overall I think people were such fans they were in denial he had really died. All it took was one Elvis sighting for some fans to latch onto the conspiracy.

Well thank you very much, sir!

Haha that looks like the sister and daughter of the lookalikes I know ( a father and son), except for the beard lol

posted on Aug, 28 2016 @ 09:36 PM
link
Then there is this guy with a little youtube channel who churns out song after song of a perfect carbon copy of an aged Elvis voice. I defy anyone to not think this is exactly how an aged Elvis would sound, talking or singing. It's most remarkable. Just look up JonCotner1835 page on youtube, heck this could even be made into it's own thread if someone wants to do it:

I think if he wanted a way out, for whatever reason or reasons.
Maybe show business had destroyed enough of his life. He knew damn
well he wasn't gonna just walk out. And that we (him and his fans)
just couldn't go on together. I mean think about it. It's not only
possible, it's highly probable.

I think if he wanted a way out, for whatever reason or reasons.
Maybe show business had destroyed enough of his life. He knew damn
well he wasn't gonna just walk out. And that we (him and his fans)
just couldn't go on together. ......I mean think about it. It's not only
possible, it's highly probable.

Woah! don't get people thinking. It's nearly 40 years ago now. Surely it's not likely the King faked his death...is it?

Is Empire news a satire site like the onion as i have never heard of them before ?

Yep Empire news is a satirical site (although not as well known as The Onion). And you probably realized that this post was not entirely serious either. Well except for the bit about Elvis still being alive of course

posted on Aug, 29 2016 @ 08:18 PM
link
The last time this topic, especially in regard to the Cotner fiasco was brought up the admins came down hard on everyone talking about it even though it generated a lot of classic ATS intrigue and excitement. We were forbidden from discussing it and told it was a ridiculous and terrible thing that lowered the quality was of the site. I never understood why as it is a conspiracy site after all and the Elvis myth is one of the most fun and enduring conspiracy stories of popular culture. I'm surprised the topic has not been shut down again. The more Cotner was investigated by members here the more interesting it got and the more wrath was brought down by the folks in charge. Cotner sells rather expensive musical collections online invoking Elvis in every possible way whilst weakly claiming to not be Elvis, just an old man doing what he loves. Whoever he is, he has the power to get discussions about him shut down on major internet sites.

You are more than welcome to discuss whether someone is Elvis. What you are NOT allowed to do, and the reason those threads were shut down hard, is to start digging into the lives and personal details of private citizens.

This has been and will continue to be ATS policy.


Well thank you very much sir.

I hope it gave people a bit of light entertainment but also gave a bit of background to the topic as well.

posted on Aug, 31 2016 @ 05:07 AM
link
Whatever you do, don't mention Jon Cotner. The threats to ATS from Cotner supporters about the possibility Cotner is Elvis in disguise got one of my threads axed. His supporters were vicious in their threats to ATS. Just FYI.

And to be clear I don't think Cotner is Elvis and i'm not suggesting that either.
edit on 31-8-2016 by thepixelpusher because: (no reason given)

posted on Aug, 31 2016 @ 05:07 PM
link
The misspelled middle name "Aaron" is really bizarre though. You would think Priscilla would have had them change it out of respect.