Last weekend, Sydney police questioned a man suspected of a domestic dispute. When pressed for answers, the man confessed that he was actually in a fight with a spider. At about 2am on Sunday, residents in the suburb of Wollstonecraft called in about a woman screaming and a man yelling: ‘I’m going to kill you, you’re dead’. They also reported about the sounds of furniture being thrown.
Authorities rushed to the scene and was soon greeted by a man with a can of bug spray in hand. The following is the transcript of the conversation between the police and the misunderstood guy.
Police: ‘Where’s your wife?’
Male: ‘Umm I don’t have one’.
Police: ‘Where your girlfriend?’
Male: ‘Umm I don’t have one’.
Police: ‘We had a report of a domestic and a women screaming, where is she?”
Male: ‘I don’t know what you’re talking about, I live alone’.
Police: ‘Come on mate people clearly heard you yelling you were going to kill her and furniture getting thrown around the unit’.
Here’s where it gets hilarious.
Police: ‘Come on mate, what have you done to her’.
Male: ‘It was a spider’.
Police ‘Sorry??’
Male: ‘It was a spider, a really big one!!’
Police: ‘What about the women screaming?’
Male: ‘Yeah sorry that was me, I really really hate spiders’.
The policemen then took a look around the apartment and indeed, only the spider was hurt in the fracas. Don’t worry mate, we would have done the same if it happened to us.
www.lostateminor.com... 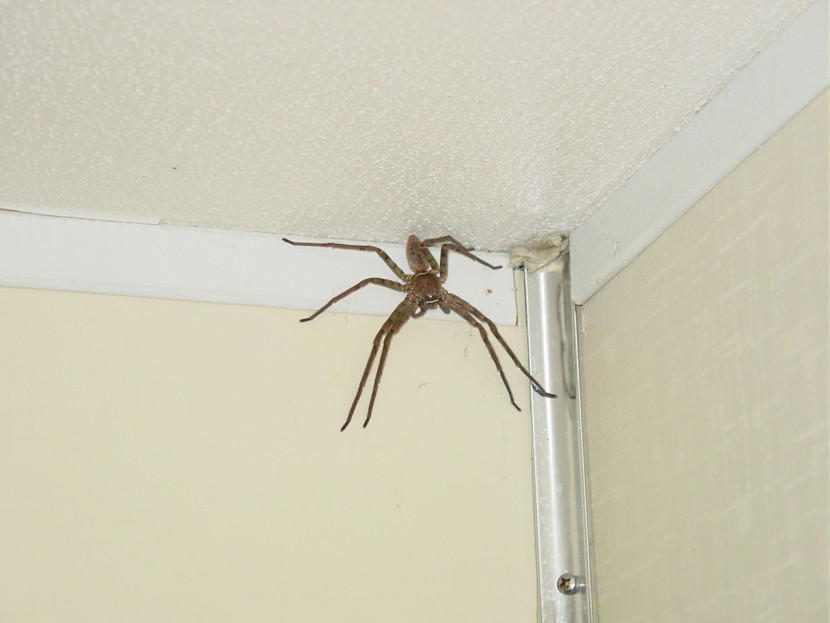 It was just a Huntsman Spider which are very common, even though they grow quite big (males can reach 10-12 inch) they are not regarded as aggressive and they are harmless to healthy humans other than a bit of pain swelling etc, unlike the Funnel Web or Red Back.

These are just some of the reasons Aussies second language is screaming, where everything wants to kill us.

Enjoy and come to Australia..


I thought it proper to put this in Civil Unrest as there are lots of domestic disputes here with our wildlife.

I'da burned the whole neighborhood to the ground, not before wetting my jeans though

posted on Aug, 26 2016 @ 07:35 PM
link
The Huntsman's here in FLorida look exactly like that. They can run at what looks like full speed across the "ceiling" (well down the crease where the ceiling meets the wall, like in that picture there). Never seen one 12" though...

They molt their shells which are kid of like statues. For fun this year I set one up right at eye level in pantry cabinet, so when I'd open the door every time it was in my face. Despite not being an arachnophobe, and being the one who put it there, the thing would still 'get' me every time. They're just that menacing! He ended up getting too damaged when I was moving the cabinet. Need to find another one to set my self-prank back up again...

edit on 26-8-2016 by IgnoranceIsntBlisss because: (no reason given)

LOL - Oh man that is too funny - all I can picture is Cameron from Modern Family running around the house having a meltdown, womans voice and all!!!

lol, yeah me too.

That is hilarious! I can relate, however. I am terrified of spiders...so much that I cannot get close enough to kill one. I have a horror of them jumping on me. Had that been me, the cops would have been calling the coroner because I think my heart would have just noped it right on out if I saw such a monster in my living space. Oh. Hell. No.

originally posted by: gps777
It was just a Huntsman Spider which are very common, even though they grow quite big (males can reach 10-12 inch) they are not regarded as aggressive and they are harmless to healthy humans other than a bit of pain swelling etc, unlike the Funnel Web or Red Back.

Dogs/Cats/Squirrels/etc are common, grow quite big, not regarded as aggressive (depends on the dog) and are generally harmless to healthy humans other than a bit of pain, swelling, etc

You really have to see them animated to even appreciate just how menacing these Huntman's are.

They have to be amongst the top jumpers in the spider kingdom, especially when they're up by the ceiling staring you down.

Any spider that requires armed combat to kill...I'm calling the cops. I don't care if they think I'm crazy. I would have to leave my house til the thing was confirmed dead.

That's a classic, thx for sharing...

About a year ago there was a huntsman on the roof of my bedroom my 5 year came in spotted it and freaked, i promised him it would be all good and the spider would stay there, sure enough as he walked under it to leave the room it fell on him, must be the only flying huntsman in Australia...now the boy has a phobia ...

OMFG...No. Just...No. With a capital No. To the power of No. Have I mentioned No? No is not even adequate, actually. Is there a word that expresses the emotion of No more than No? If so, then insert whatever that is in place of No.

But, didn't you see the guy handling it just fine.

You better not move to Florida!

This one always cracks me up

Spiders while hideously scary are fascinating creatures, I like watching them roam around my walls and allow them to stay as they keep the bugs out. Although I had to flick one off me last month as it was climbing up my arm and I hate that feeling.

Jumping spiders are my faves though


originally posted by: gps777
It was just a Huntsman Spider which are very common, even though they grow quite big (males can reach 10-12 inch) they are not regarded as aggressive and they are harmless to healthy humans other than a bit of pain swelling etc, unlike the Funnel Web or Red Back.

Dogs/Cats/Squirrels/etc are common, grow quite big, not regarded as aggressive (depends on the dog) and are generally harmless to healthy humans other than a bit of pain, swelling, etc

Dealt with some Huntsmans in my day. Those #ers get BIG. Also sounds like a bag of potato chips getting stepped on when you crush em.

Looks like he's playing wall pong with his hands as the paddles.

You know it's bad when the spider answers the door.

I lived for a while in rural Virginia, and had a little garden apartment on a farm. The property owner warned me about snakes and bears and such, which was expected. I asked him about bugs and spiders, and he assured me the only spiders I'd run across would likely be "just those little brown garden spiders".

Garden spider...OK, sounds pretty benign. Ditto "little". Small and they like the garden, which is not inside my apartment. I put it out of my mind.

Couple weeks later, it's about 1am and I'm at the kitchen table reading a book. I feel something brush the top of my foot, and automatically think it's one of my cats, so I glance down to see which one.

Well. I learned a few valuable things in the moments that followed:

1. Garden spiders actually not "little". Unless your point of comparison is a tarantula. From Jurassic Park.

2. Garden spiders cast a visible shadow on linoleum. That is a fact.

3. Garden spiders are not intimidated by cats, an entire can of bug spray, half a can of hairspray, brooms, mops, Windex, oven cleaner, or a variety of other threats, including a 78lb pitbull. After sucking down half a bottle of Clorox tub and tile spray that I unloaded in its face with the "stream" setting, I swear the vile thing smirked at me. And when I finally brandished the hammer, steeling myself for battle, I am certain I heard a distant, evil chuckle.

4. I have astonishing accuracy when hurtling a claw hammer at a garden spider from a distance of at least ten feet in a crisis situation.

5. And the most important lesson of all: garden spiders do not die right away when subjected to blunt force trauma from an airborne object. Garden spiders require a double-tap. Do not be fooled, people. Trust me on this.

So...every night for the rest of my stay there, my evening ritual included liberally spraying each and every crack or crevice around the door, followed by applying a double layer of duck tape over each poison-filled crack. Every. Single. Night.

It was the only way I could sleep. I wish I was kidding, but I'm not.