What a Horrid First Day

What the heck? That's inappropriate.

posted on Aug, 25 2016 @ 06:30 PM
link
Sorry that happened to you. I'm glad you and your mom are alright. But, really, it's not about you. I know everything feels like it's about you at that age, but it's not. Your parents now have some drama to deal with and decisions to make. Be helpful to them by taking care of your business, school, your chores, etc.

Now, be glad you don't have homework and go watch Battlebots later.

originally posted by: kosmicjack
Sorry that happened to you. I'm glad you and your mom are alright. But, really, it's not about you. I know everything feels like it's about you at that age, but it's not. Your parents now have some drama to deal with and decisions to make. Be helpful to them by taking care of your business, school, your chores, etc.

Now, be glad you don't have homework and go watch Battlebots later.

Sorry about the van! Sounds like you have some good memories of it, which will soon wipe out the traumatic ones.

Having some level of flashback episodes is normal after such a shock. Adrenaline is a weird thing that way. What you should expect is that after a couple of days of normalcy, the flashbacks should space farther apart, until they are hours instead of minutes apart. Then days apart instead of hours, etc. If that's the only residual effect, and it diminishes in frequency over time, all well and good. Of course, if you feel like talking it out, then yes you should do that.

If you run across that smell or sound again in your goings about, that will probably flash you back a little too... don't be alarmed. Also understandable.

Glad your Mom got checked out and is fine. And of course, also way glad you're fine too!

posted on Aug, 25 2016 @ 09:22 PM
link
You and your Mom are very fortunate. People lose their lives in accidents or are disabled for life. You are both alive and ok and that is what matters most. It isn't your fault at all. The memory is still fresh in your mind, but it will fade in time. Give Mom some extra attention and love. I don't know how badly bruised up she is, but I'm sure she is in some pain. HUGS!

Be grateful you're alive to see your first day of school at school, not in a hospital bed.

You're alive, meeting people, and enjoying school. Your mom is alive, and both of you will recover in due time.

This is a bit harsh - but in any scenario, it's better to be alive than die with your car. Doesn't mean you can't be sad - I had to move out of my hometown the day after graduation (16 years I've lived there). I still miss that place. Just wait, before long you'll be thinking about having your own car soon enough.

Luckily I had just dropped my son off at daycare back in 2010, but right after that, I was stopped behind another car at a stoplight, and I just happen to see a minivan taking up my whole rear view mirror. Seconds later, I was getting out of my car, and in front of me was the bumper of a Ford Explorer. The minivan driver hit me going about 45 mph and it pushed me over into the right lane and nearly under a Ford Explorer...luckily my crumpled tiny hood stopped my vehicle's progress. It was a dinky little Toyota Yaris (2-door at the time), but I walked away with maybe a slight concussion (I never got that checked out, but had to leave work later that day due to feelings of nausea). Kentucky is a no-fault state, so the driver (who was probably on their damn phone) who hit me was not held accountable in any meaningful way.

Point is, drivers are going to cause accidents from time to time, and there's no reason to get too worked up about it, especially if everyone is relatively okay. My niece got t-boned by a drunk-driver once and has lived with pins and plates in her pelvic bone every since, making childbirth damn near unbearable. I also personally knew a couple people who have died in car accidents, so instead of focusing on the negatives, run with the positives.

On a side note, make this a learning experience for you--you should NEVER block an intersection. 99% of the time, that is an avoidable situation.

I'm very happy that you both walked away from this.

posted on Aug, 26 2016 @ 08:14 PM
link
The van has a small chance of not being totaled and hauled to the junkyard. I've been in that van since I was 2 and a half. The whole middle-bottom and bottom of the left side of the van is caved in. Only the left side airbags deployed.

This accident has given me a new interest: Crash testing. I've been trying to solve this accident since yesterday. I've looked at videos of side-impact tests on the 2005 Odyssey, and what happened in the slow-motion video is almost like what happened in the accident yesterday. The glass in the accident I was in did not crack because it happened below 45 mph I do believe. And also, the car that hit us was not a Hyundai Accent. It was a 2007 Hyundai Elantra. My dad took photos of the Elantra, and from what I can see, the car came at an angle. You see, the left-front side (3/4) of the Elantra had the most damage. The other 1/4 was slightly damaged. His airbag did not deploy, probably because of the angle of the impact.

The van however, sustained a hard impact near the back of the drivers door to the door I was looking out of. I thank God for making me sit on the right side for 11 years. It's become a habit. It saved my life yesterday. If I were to have sat in the left seat, I possibly could have been knocked out, ears ringing, and a possible sprained leg. Most of the injuries would have been caused by the side-curtain airbag.

But what leaves me baffled is how there's a big scratch from the rear of the van to the front of the damaged areas.
I've made a drawing of what the damage area covers and what the scratched area (from the accident) covers:

The red is where the damage is, the green is the scratched area, and the blue arrow is showing the direction of the Elantra. 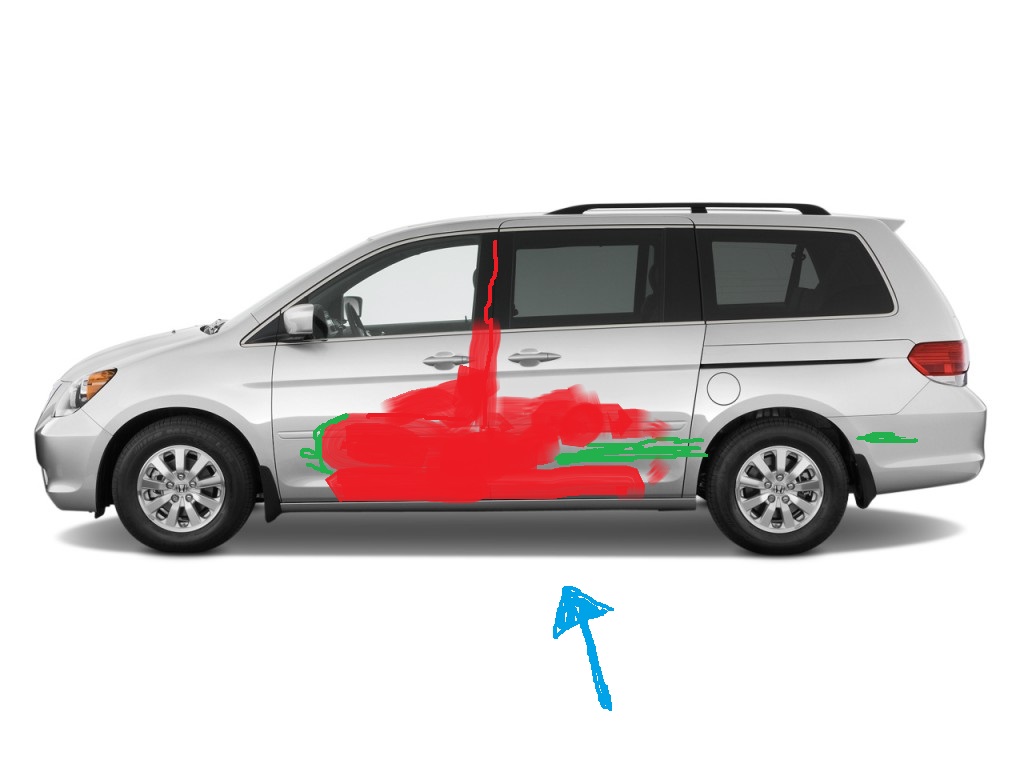 posted on Aug, 26 2016 @ 08:21 PM
link
I really hope the van can be fixed. Just in case the van had to be sent off, we took all of our belongings from the van. I hope it isn't totaled. The inspection place will determine that. If we do get it back, that'll be the greatest present I'll ever receive.

The best part of not being responsible is not looking for the truth!

Relax buddy! Your statistics are in you favor!☺
edit on 27-8-2016 by TEOTWAWKIAIFF because: continuity