Pliny the Younger reports that it was in the seventh hour after sunrise (right around noon) on August 24th of 79 CE that his mother pointed out to his uncle, Pliny the Elder, that “a cloud of unusual size and shape is appearing.” Pliny the Elder was then stationed at Misenum, serving as the commander of the Roman fleet there. In the hours that would follow, thousands would die in the wake of Vesuvius’ eruption, their bodies sealed beneath a mixture of ash, rocks and pumice.

So begins the tale of the last day of Pompeii, told by Dr. Sarah Bond (Assistant Professor in the Classics Department at the University of Iowa) over on the Forbes site. It's certainly a dramatic story and one that's captured the imagination of writers and artists for a long time. It's not quite an hour-by-hour account, as there are some gaps in time when presumably there was only the noise of the volcano and the sounds of people trying to get things together and (for some of them) trying to get out of town. The blog also includes a link to a very short video that I've seen before, showing a quick CGI time-lapse of what they think it was like during the last 24 hours (which began at noon on one day and ended around two hours after sunrise the next morning.

The article (at this link) includes resources such as a map of Pompeii and some links to recent research there.

Bulwar-Lytton (founder of the Boy Scouts) also wrote a novel about it that featured a handsome Greek (he liked the Greeks, apparently unaware of some of their cultural practices) and a lovely Greek woman who was the ward of (of course) an Evil Egyptian Sorcerer of the Temple of Isis (proving he didn't know much about Egypt.) In spite of its flaws, I remember it as a real "page-turner" ... I read it as a child and was just fascinated by the whole thing. It has the flavor of the original Ben-Hur novel (if you remember that one.)

You can read Bulwar-Lytton's novel right here at Project Gutenberg ... just in case I hadn't given you enough tempting things to read this week.
edit on 24-8-2016 by Byrd because: (no reason given)

Normally reading about it is much better, but the hour by hour description in the reading part was, well, sad.

They did make this animation though! (from your link, hope you don't mind me posting)

originally posted by: tikbalang
holy s*** that was a fast switch on from one topic to another, so whats the topic.. ?

The name of the novel is "The Last Days of Pompeii." Just like the article - but it's fiction and really glamorized fiction and heavily romanticized history. They made a movie of it (several times, I think) and even a tv series.

Thanks Byrd, you know i love me some Roman!

I have read a copy of Pliny's account numerous times before - it is, in effect, the world's first scientific description of a strato volcanic eruption (even includes lightning within ash clouds). I was a bit suprised that no one scarpered beforehand though. The Phlegrean Fields was a seriously active area at the time and in the weeks leading up to the eruption there was a huge bird and wildlife die off from an increase in Sulphurous fumes. This, combined with an increase in minor tremors should have given some warning. It is worth remembering that volcanoes were not a new experience for Rome, just the scale of destruction was new.

originally posted by: Byrd
a reply to: Vector99

In Montserrat. He survived by blocking up any gaps he could find (his cell only had a tiny window). However, he still recieved severe burns. Afterwards, he worked with (i think) Barnum's (if not, it was another circus/ freak show) showing off his burns. The flow not only burned his skin, but also his lungs and oesophagus. They are extremely difficult to survive if you are caught in the path as not only do the particles get forced into any openings in your body, but the air is also superheated meaning you get internal burns. Sadly, he didn't actually live all that long afterwards (few more years).

posted on Aug, 25 2016 @ 06:18 AM
link
Visited Pompeii last year and was pretty amazed at the sheer size of the place and there's still tons to uncover yet. That said due to thieves and artifact stealers, the place is actually rather dull as absolutely everything has been removed except for the walls and pillars so makes it very difficult to know what building is what when touring. They even stole the lovely mosaics. However you can see why, due to the very narrow streets, built for carts, so many couldn't escape. I also climbed Mt Vesuvius which was something I'd wanted to do for years and could see the blackened lava flow heading down to the city and also at the side of Vesuvius is a valley covered in volcanic lava from an even earlier volcano where you can see how the forest was decimated and now nothing grows.

A better place to visit is further along, the town of Herculaeneum which is far more complete and gives a great indication of how the landscape has changed. This was actually a port town which is now miles inland and much lower than the current land around it, approximately 20m below current ground level. The people there were instantly suffocated in the enormous heat of the pyroclastic surges (up to 500degrees) and many were trapped in the port area and boat houses trying to escape to sea and those bodies have been left where they were found. Unfortunately excavations at Herculaneum ceased for some time due to the discovery of Pompeii which was easier to excavate due to the fact that Pompeii wasn't as deeply buried. Excavations resumed briefly but have been forced to cease again as each time they find something else they are having to move people out of the Naples suburbs and re-house them. Its a very costly process and to be honest many of the Italians I speak to are really quite blase about the archaeological findings as there are simply soooo many and more uncovered weekly. 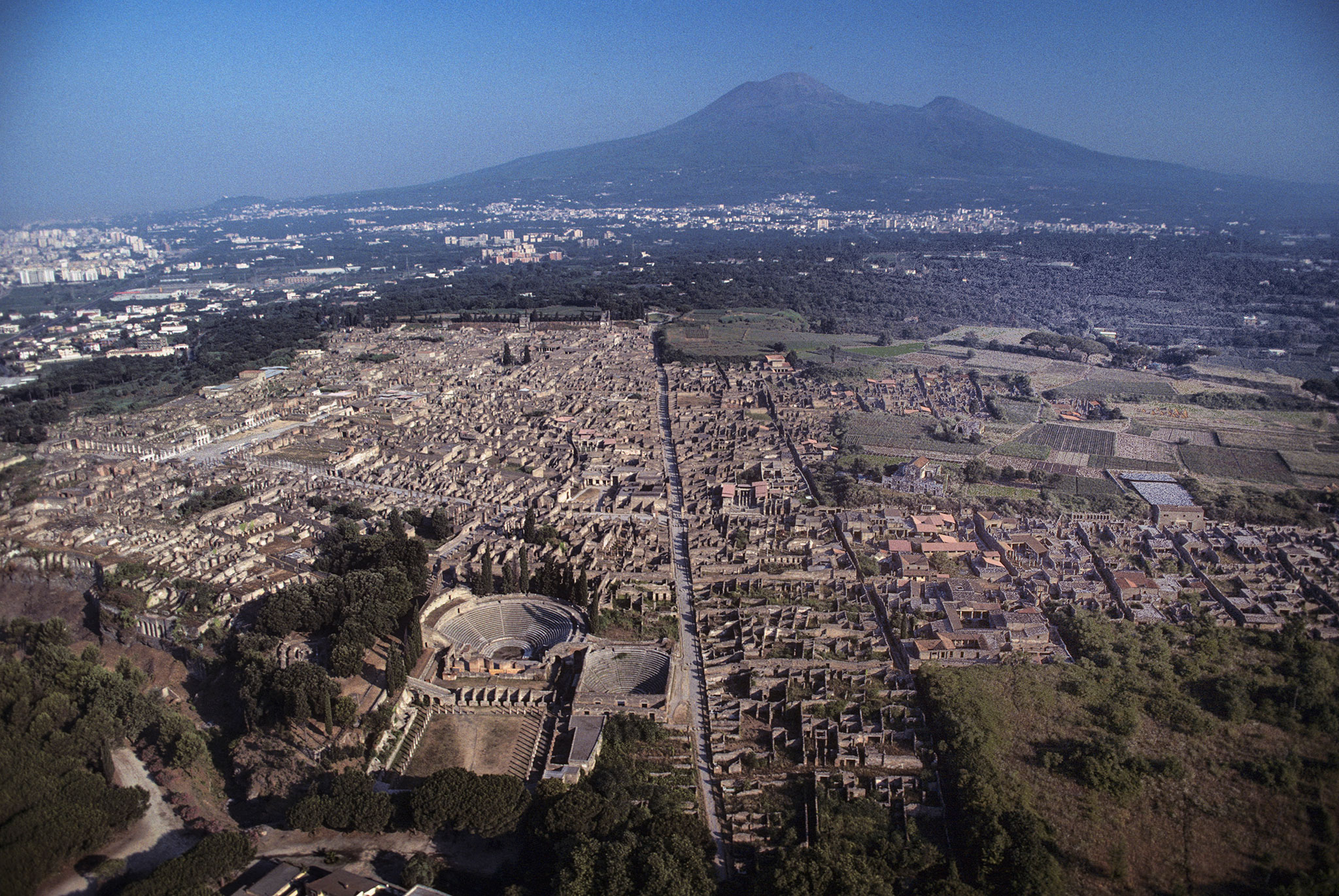 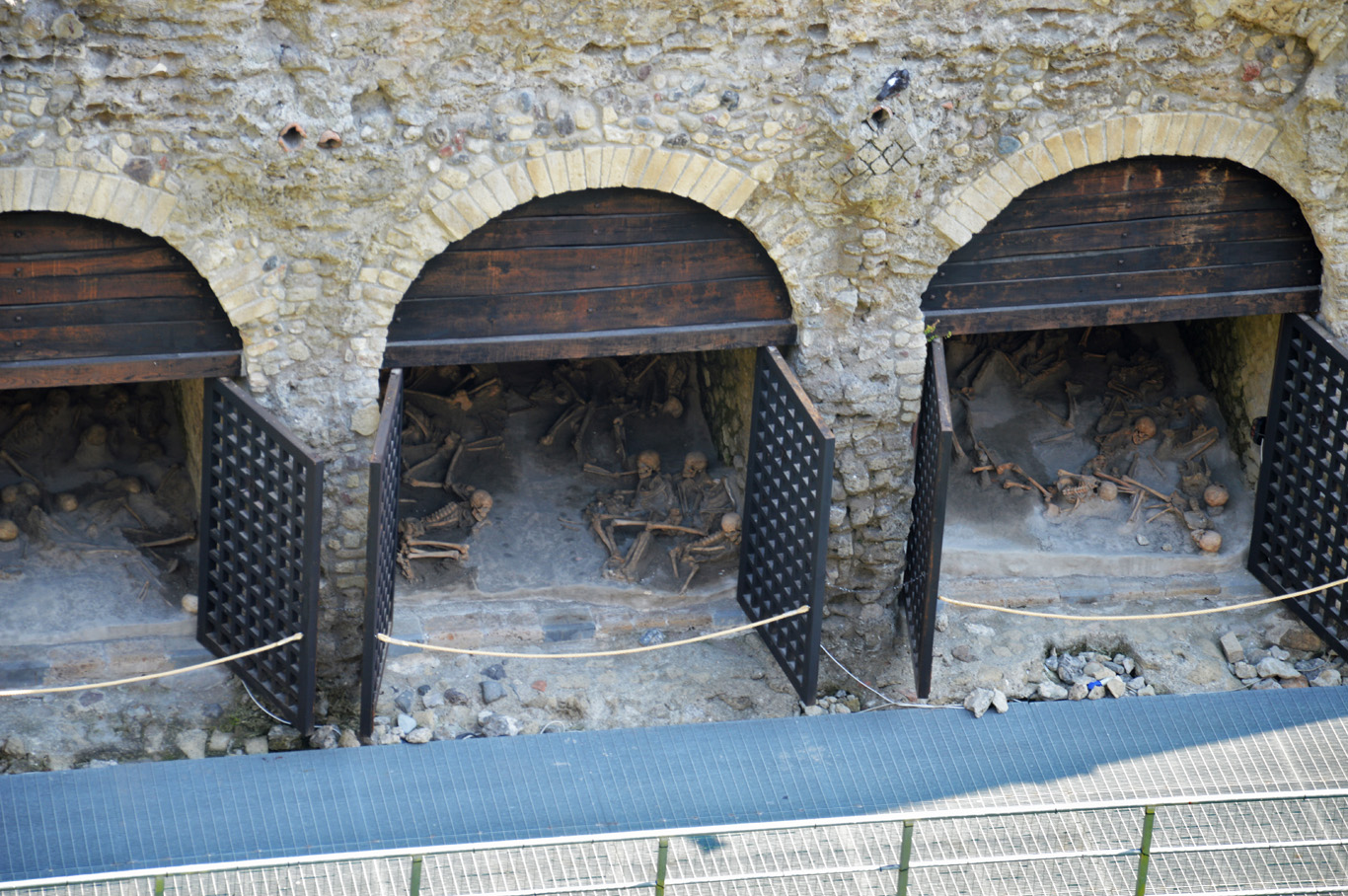 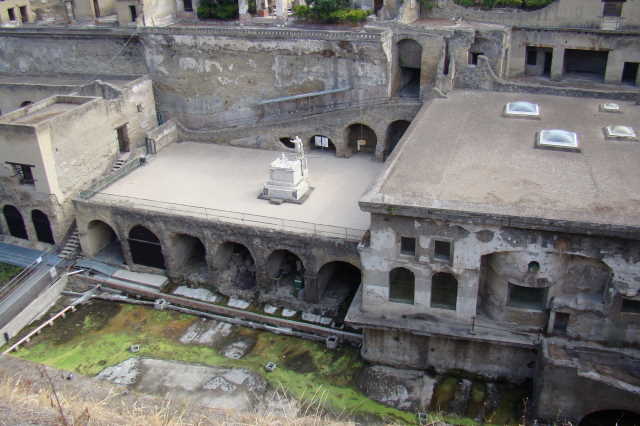 Whilst discovering the past is truly wonderful, the speed of deterioration is a major problem for archaeologists as whilst the ash & lava created a "time capsule" exposure to 21st century elements and pollution is causing finds to disintergrate rapidly sometimes within just days of discovery. Its a tricky choice of whether to leave things where they are or unearth them for historical purposes. Vandalism is also a problem. I was saddened to see that in a complete bathhouse covered in beautiful mosaics, kids had covered the walls in graffiti and there was evidence of drug use cigarette butts and bottles/cans everywhere. I noted that security was extremely lax in almost all the archaeological sites and it was clear that younger generations had little or no respect for their heritage.

was about to bring up herculaneum myself, overlooked and kinda forgotten.

Sadly yup. It is surrounded by high rises flats & tenement buildings and in a very built up area which would cost a small fortune to move people out and re-house whereas Pompeii is pretty much in the countryside with little around it and therefore cheaper to excavate. Sad because Herculaneum is far more intact with most buildings still being upright, even the wooden shutters and statues are intact.

I can quite understand some of the Italians' attitude towards the constant discoveries & excavations. I was speaking to an Italian guy in Naples at the constructions of a new road intersection which was forced to stop and grind to a halt as they had found another site close to the castle & docks and were uncovering more artifacts. He said the town planners dreaded finding an ancient site as they knew it meant stop all work

Herculaneum was more lahar than pyroclastic surge (although there was undoubtedly pyroclastic activity there), hence it is easier to excavate through volcanic mud than it s through tufa and pumice.

Pompeii was a Colonia (town granted special status, not many around the Empire but York in England is also one). It was the Summer haunt of the rich and famous of Rome. Only around 30% of Pompeii has been excavated. Interestingly enough, Thonis-Heraclion is estimated to be far bigger than Pompeii but buried underwater so excavation there will be much trickier).

One of the problems for archeologists in the region is the intransigence of the local authorities - it is not easy to get permits to excavate there.

Herculaneum on the other hand was a working town. So, in terms of archeology, excavations at Herculaneum would give a better insight into the lives of your everyday folk. Pompeii would be better for the refined side of life back then! The Villa of the Papyri at Herculaneum is an interesting thing though. Scrolls recovered from there were uncharred owing to it's height above the ground so it is possible that further finds could be made there.

Pliny himself regularly visited Stromboli to witness eruptions (it has been erupting almost constantly for the last 2'000 years).