page: 1
15
<<   2 >>
log in
join
share:
StallionDuck
+1 more
posted on Aug, 24 2016 @ 04:47 PM
link
Just when you thought that the floods in Louisiana couldn't make things worse for the people, along comes this idiot law maker who wants to slap fees on people helping people. Where do we find these people and why do we put them in charge of our state, our people?

The Good Samaritans who rescued hundreds, maybe thousands of people during the Great Flood of 2016 are not happy after a state lawmaker announced that he wants government regulations on future actions by the citizen heroes.

So you want to deter people helping other people by slapping a fine or a tax (that's really what it is) on them for having a heart! Ok, so the excuse is, we don't want anyone to get sued. Well make a bloody &*%^@! LAW that says you can't sue someone who's trying to help you!

Republican State Sen. Jonathan Perry of Vermillion Parish, is working on legislation that could require training, certificates and a permit fee to allow these Good Samaritans to get past law enforcement into devastated areas. He said some were turned away.

“At the end of the day, there are going to be two things that are going to be the hurdle when you approach it from the state’s standpoint,” said Sen. Perry in a radio interview. “Liability is going to be number one for them. They don’t want the liability of someone going out to rescue someone and then not being able to find them (the rescuers) and, secondly, there’s a cost.”


I really think this guy just wants to see death and mayhem. He doesn't want to see people saved. He doesn't give a damn about my state. He needs to be kicked out. I envision pitchforks and torches chasing Frankenstein away from the town square. Seriously, people like this need to go!

The REAL people of Louisiana know what's up...

Members of the Cajun Navy don’t understand the regulations.

"How can you regulate people helping people? That doesn't make sense to me," said Clouatre.

Political blog The Hayride is speaking out against any regulation.

"And we'll never know how many people got rescued, right? Because there were no bureaucrats with clipboards marking down how many. They just went and did it," said publisher Scott McKay. "The fact that John Perry is a Republican, right? It's like 'Hey, you ran on small government. Now you want to regulate the Cajun Navy.' What are you doing?"


Maybe we just don't save anyone anymore! But... That's not our ways! But sure... we should wait for the state to help us out of a bind when you see stuff like this: 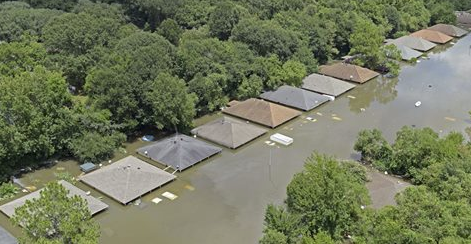 But no... It's not going to work like that. I have an old friend in the middle of that mess and this is what he's saying currently on FB (I will only chop parts of his post to secure his identity)

virtually ALL of Livingston Parish was flooded, and there are twenty parishes altogether that flooded this time - will likely be more than 300,000 homes before this is all... ....and the government is virtually non-existent down here. After Katrina, you couldn't swing a dead cat in this town without hitting a National Guard truck or FEMA van and those crazy FEMA trailers were everywhere. next to nothing is happening here now. piles of debris everywhere - from where people gutted their houses and I've only seen one or two trucks even starting to pick up debris - and we just endured the biggest flood in the history of the state, and that's saying a LOT given the state we live in. ranting because once again, when one single thug was shot resisting arrest and fighting with two cops, CNN and Fox News camped out here for a month covering the "big story" and here at the office, we're getting calls all day long from people across the country that have no idea what's going on down here


I have some choice words for this lawmaker guy but I can't say them on ATS. I hope he gets a million calls a day from the people to express what an @$$ Hat he is!


This breaks my heart!

originally posted by: projectvxn
There is nothing politicians don't want to regulate in order to make money off of it.

No you wouldn't. You'd say "yes sir" just the same as you've always done. Then you'd come on the Internet and type that you'd tell tell him to piss off.

originally posted by: Cheddarhead
No good deed goes unpunished, does it?

You know the saddest part? This guy is from my OWN PARISH! The Parish where all of my family are from and have been from for the past 100 years!

posted on Aug, 24 2016 @ 05:06 PM
link
This politco is likely a boat dealer in LA...if he can't make a buck selling it to you he will slap you with a fee to use a boat to rescue folks.
Suggest he take a long walk on a short pier.
Cheers


Oh man... This part of LA is lit up like a Christmas tree on Thanksgiving. If Cajuns are one thing, they sure in the hell are vocal about their thoughts and beliefs.

"Hello Sir, I'm a Virginian, and in fact, I have never even set foot in your home state. The chaos from the worst flood in your state's history in no way directly effects my day to day existence. With all of that out of the way, I would like to inform you that I just read online, that you would like to potentially fine good Samaritans who go about assisting there fellow citizens in future disasters. There are many things I would like to say to such an idea at this time but, I will be polite and say only, NO. JUST NO. "The two enemies of the people are criminals and government, so let us tie the second down with the chains of the Constitution so the second will not become the legalized version of the first" -Thomas Jefferson. What do you think Mr. Jefferson would say to your idea? Good Day to you sir."

- Everyone else that is pissed off about this should also Email the senator. Just Google his name and go to the website, his email address is on the right.
edit on 24-8-2016 by 191stMIDET because: Technical difficulty

we have to clean house. Its to the point now that common life and common people can not live.

They are crossing sacred lines. This is just too much. History proves me right, but events to come will do so as well.

They are brewing the sort of disconnect and feverish hunger for our lifes blood that starts revolts.

When there are a lack of words to express what we feel, or deaf ears to listen to even the most articulate message, action becomes the only option no matter the cost or threat

originally posted by: Puppylove
a reply to: projectvxn

originally posted by: Tarzan the apeman.


originally posted by: Puppylove
a reply to: projectvxn

You mean that sewage charge on your utility bill?

This is beyond belief. Only in govt will you find this kind of asshattery.

A law needs to be enforceable. This won't be.

From a liability aspect it makes sense. When it comes to mass disaster situations there are protocols in place that keeps track of first responders entering / operating in the area (1st responders = police / fire / ems / military / etc).

You run into situations of live power lines / gas leaks / structural failure / bodies and disease / etc. Situations that would require some training to properly identify the dangers and how best to deal with them when trying to rescue people / recover bodies. Who is responsible if a "civilian" takes it upon himself to go out and rescue people, only to have his action result in a persons death?

It can become problematic when regular people take it upon themselves to enter an area and begin their own operations without coordinating with the groups keeping track of rescue / what have you efforts. The last thing you want is to have to divert resources in order to rescue "other" rescue workers. It also creates an issue of areas being "cleared" by these civilians but failing to notify the "chain of command", resulting in a wasted effort of checking an area that was already cleared.

People rescued are also entered into databases so they can be tracked for accountability of population numbers. Non government entities most likely are not coordinating that information so people can be tracked, creating an issue of "missing" individuals who arent missing at all.

Dont get me wrong I understand where some of the outrage is coming from over the ideas of this law maker. At the same time my experience and training allows me to also understand why he is putting the idea forward and the intent behind it.