Social Security wouldn't pay what was owed to 80-year-old Wanda Witter, and she ended up living on the streets of Washington DC for 16 years. She carried three suitcases of paperwork documenting her claim that the government owed her more than $100,000. Many people thought she was mentally ill and was making it up. But she was right all along, and Social Security wrote her a check for $99,999. They will probably give her more. 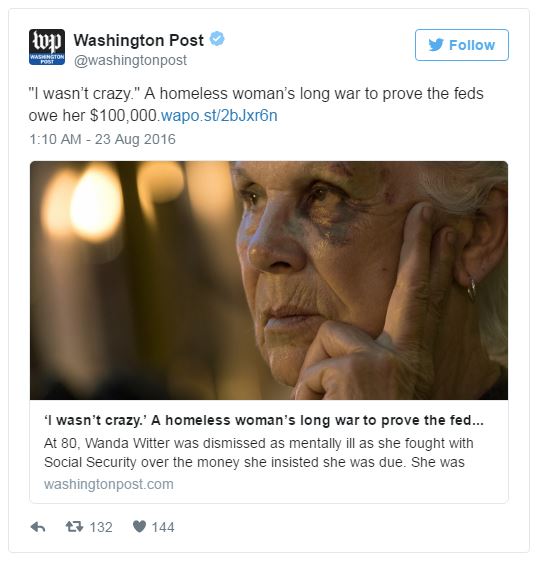 So how did this tale come to be?

The Washington Post reports 80-year-old Wanda Witter moved to the District of Columbia in 1999 to seek work after losing her job as a machinist years earlier.

Witter remained jobless, and in 2006 decided to draw Social Security benefits. However, the monthly checks ranged from $900 to $300. Believing the checks were wrong, Witter didn’t cash them and sought help.

Smart woman, not to cash the checks, but unfortunately for her, a homeless and penniless one.

The idea of taking on a behometh government department like Social Security is daunting for anyone, so good on this woman for her tenaciousness and fighting spirit.

God bless her, it seem's that we English are not the only one's with corrupt social security office's.

16 years of being called homeless, a bum etc... and criminalised is bad enough. Imagine being there when your owed 100k from the government.

I will also add that someone of her age being homeless and penniless is q damning indictment of what is supposed to be a prosperous society.

posted on Aug, 23 2016 @ 08:11 PM
link
Good to hear she has resolved this. Hopefully others in the same position can get some help with her diligence as an inspiration. Sadly the roughness of being homeless took so much from her life it will never really compensate for what was lost during those years just finally giver her comfort.

posted on Aug, 23 2016 @ 08:20 PM
link
I'm glad this woman got the money she was owed, but there is obviously some personality strangeness going on.

Not saying she's "crazy"; saying that, the woman turned down help from family over and over. Being homeless didn't help her in her quest to get her money. Her excellent organizational skills and sheer luck did. The lawyer who helped her get the money practically had to beg to help.

The SSA has a lot of problems. A friend of mine has been collecting his father's SS survivors benefit and his own benefit as he has spina bifida, for years. He was able to work about 15 hours a a week in IT (for about $10/hr), and that income was considered and removed from the total he received.

About 5 months ago, something odd happened. He was told he was overpaid and would get nothing for a long time. Not possible, he looked up the charts and he was paid exactly what he was owed.

He called the SSA and for a couple of months, they sent him manually cut and signed checks, apologizing for the problem. He then received another letter saing his benefits would cease.

He has called many, many times to no conclusion.

His original attorney for SSD will not represent him again without being paid.

He now has to go visit the local office. It is insanity and for 3 months has lived off of savings.


originally posted by: Atsbhct
Not saying she's "crazy"; saying that, the woman turned down help from family over and over.


IMO sounds like she had the fires of injustice burning in her belly and determination and strength of a much younger gal. She had probably been called crazy more times than she remembered, this was about her vindication and her pride.
edit on 23/8/2016 by BelowLowAnnouncement because: (no reason given)

That's called integrity and strength of character in the face of overwhelming adversity. You don't see too much of that anymore in this country. Most would have taken the handouts. But if she had done so, it would have compromised her personal principles. It would have meant she was giving in. It would have made her soft.

It's one of those things in life where sticking to principles is more important than the self. It's also one of those things that unless you're faced with it, the meaning may seem unclear, and even illogical. I have faced it, and I too, persevered. And people thought I was crazy too...I couldn't blame them, really. It would have been far easier to give in and allow myself to become another victim of the machine.

Bright Blessings to this brave warrior of truth. Her reward will be that much sweeter because she fought for it.

He needs to find an attorney, pronto. There is an excellent website called avvo, which will match you with an attorney who is willing to take the case pro bono or on contingency...I found my attorney there, after giving up in disgust over the ones I found locally.

It took me more than three years of homelessness, being hungry and alone, but I won my settlement. I just had to find one person who was willing to take a chance on what seemed like a lost battle. It was the hardest thing I've ever had to do, but it was worth it. Tell him not to give up, no matter what.

If the big chunk ever comes there will sure to be lawyer fees and landlords, utilities and banks holding out their hands.

Adjusted for inflation, that's about 140k.

Then there's the whole part where she was getting screwed for more than a quarter of a century...

And to think, these same idiots spend billions on private corporation interests to screw the people. It's a wonder there aren't more riots.

She's been off the grid for sixteen years. Creditors can't touch her past seven, so she's probably safe from that. She has proof that she was unable to meet her obligations through no fault of her own.
Her attorney will of course take a percentage, but they put in a lot of work for her and went to bat for her when no one else would, so that would have been agreed upon before they took the case.

I'll bet that 1464.00$ felt absolutely amazing. She'll have the rest once the paperwork clears through. Probably about four to six weeks, if that. And now that her story is out, she'll be treated with the respect that she should have all along. Pity that it took this long, but I'm sure that ever since they took her case, she has not been sleeping on the street. She's an amazing individual and her lawyers are too.

I'll bet that 1464.00$ felt absolutely amazing. She'll have the rest once the paperwork clears through. Probably about four to six weeks, if that.


Read down to the end of the original article I linked above.

posted on Aug, 24 2016 @ 08:32 AM
link
I understand her problem. Shortly after my wife passed away 2 years ago Social Security decided that I was no longer disabled and want's their money back. Her death in no way affected my disabilities. I'm on round three of fighting this with the third lawyer. Hopefully this will be the winning plan this time.

posted on Aug, 24 2016 @ 09:55 AM
link
What I find crazy is that there is some government bureaucrats who won't fix what seems to be small errors despite plenty of evidence and it takes getting a lawyer to get these issues corrected.

This is the kind of stuff many of us conservatives point to when we say no accountability in government.