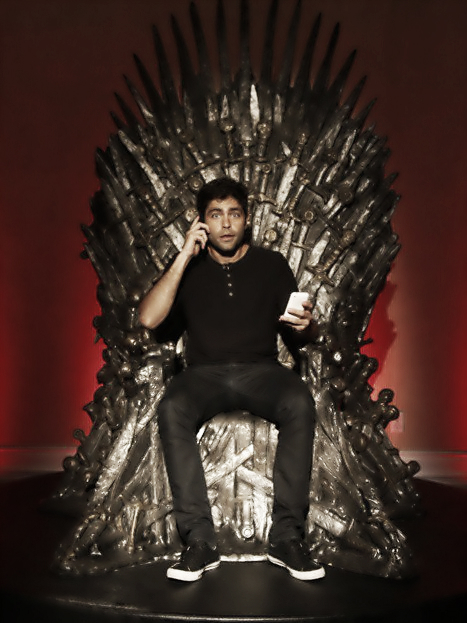 Or maybe, good to know that there were kings/rulers who were just Regular Joes like us..at one time. The world has changed and whoever has the most cash wins now..but I do like to look back from time to time and remember the days when anyone, no matter where they came from..could rise and become more than the life they were born into...

Little is known for certain about Servius Tullius’s early life, but Roman legends (and his name) suggest that he was born a slave. Some sources claim that he was the son of a princess captured and sold into slavery during the siege of Corniculum, but others suggest the Roman nobility simply made the story up tomask their embarrassment at being ruled by a commoner. The legends do seem to agree that he was destined for greatness from childhood, since his head had a tendency to burst into divine flames while he slept.

His reign lasted for roughly 43 years, during which he defeated the Etruscans and ordered Rome’s first census, dividing the city into six official classes. His reign was a time of prosperity, and his reputation was so good that it actually makes it hard to be sure what else he did do, since later Romans had a tendency to attribute most of the city’s traditions to him. more

Most Byzantine emperors gained power through a strict line of succession, but Justin I managed to take the throne by sheer force of will. A peasant by birth, this self-made royal spent his youth as a sheepherder in the Balkans. Hoping to find fortune and adventure, he eventually struck out for Constantinople in the late 4th century. Arriving in the capital city with nothing but the clothes on his back, Justin lucked into employment as a guard for the Byzantine Emperor Leo.

Though he could neither read nor write, Justin was respected for his bravery and skill as a fighter, and he eventually rose to command the palace guard. When the childless emperor Anastasius I died in 518, Justin used his influence to win over his fellow soldiers and seize the throne for himself. With this coup, the 68-year old completed a miraculous rise from poor shepherd to sovereign of the Eastern Roman Empire.

The life of Empress Catherine I of Russia could easily be confused with something out of a fairy tale. The future queen was born in 1684 into a family of Lithuanian peasants, and was orphaned at the age of 3 after both her parents died from the plague. Taken in by a pastor, she spent her youth as a housemaid in Marienburg in modern day Latvia. After Russia conquered the city in 1702, 18-year-old Catherine was captured and taken to Moscow. She became a servant in the home of a high-ranking government official, and it was there that she met the Russian Emperor Peter the Great. Despite being uneducated and illiterate, Catherine charmed the emperor with her beauty and wit, and the two soon began a passionate affair. more

Andrew Johnson: Lincoln’s immediate successor came from perhaps the barest of means. Johnson lost his father when he was three years old and his mother sold Andrew and his brother into indentured servitude, apprenticed to a tailor in Raleigh, North Carolina. Indentured servitude was slightly better than slavery, but a horribly tough life. The Johnsons hated it so much that they escaped two years later. more

Andrew Johnson was born in a log cabin in Raleigh, North Carolina, on December 29, 1808. His father, Jacob Johnson, died when Andrew was 3, leaving the family in poverty. His mother, Mary "Polly" McDonough Johnson, worked as a seamstress to make ends meet. She and her second husband apprenticed Andrew and his brother, William, to a local tailor.

One site says he was sold as an indentured servant, another that he was apprenticed out to a tailor ..whatever the case, he started from destitute beginnings and carved a path to eventually become, the 17th president of the united states.

And there you have it..a few of the most powerful people in their time..who were not so powerful growing up..but still managed to make an impact and become some of the greatest rulers in the history of mankind...


Edited to add: You don't have to come from great places to do great things..as proven by these people and many, many others...
edit on 22-8-2016 by blend57 because: (no reason given)

Thank you so much, this was very interesting!

I love this thread and the information therein.