I disagree. (in my opinion)

Each generation eithers adds or removes from the culture they live in.

Our cultural growth has not been linear.

Or better yet, how many of you have taken ANY college courses?

I'm not afraid of that happening and here's why: even they don't know what they want.

They have no structure. They can't even describe what constitutes oppression. 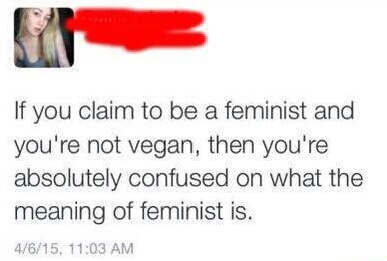 You can see the infighting already happening now. The "movement" will implode.

I will explain to you what the quote in the twitter picture means. I learned this in one of those "social justice" college courses you speak of.

Factory farming is absolutely inhumane and female animals are THE MOST exploited.

Female cows, for example, are forced to be perpetually pregnant though artificial insemination, which is essentially rape. After giving birth, their young are almost immediately removed from their mother and eventually killed and sold as veal. The mother cow is then pumped full of pharmaceuticals to continue to produce milk (which was intended for their recently born calf). They do so by standing in their own feces inside cages that are barely larger than their own bodies. They repeat the process of being impregnated over and over until their bodies are so taxed they no longer have the energy to live. Most have never even been outside their cage or seen the light of day.

The above is true, I'd suggest you google videos of the horror, if you can stomach it. It is obscenely cruel.

A feminist wants to end the oppression and exploitation of women. A true feminist would not support an industry that enslaves, rapes, and exploits others. That is why consuming dairy and other animal products is the antithesis of feminism.

But I'm sure to you that is all just propaganda.

Perhaps you should try going to college. You might actually learn something.

Broad brush is even broader when applied to entire generations.

Despite members of previous generations complaining, every generation grows up and fills each and evey position you mentioned.

I can't "laud" generations. Only actions.

I can't "laud" generations. Only actions.

You can't laud but you can criticize?

You don't need "roses", whatever that means, to have people do the jobs you listed and it gets done every generation, contrary to your opinion.
edit on 19-8-2016 by daskakik because: (no reason given)

Yes, but that still has not kept any generation from also producing the people needed to keep things going.

Yes, but that still has not kept any generation from also producing the people needed to keep things going.

It looks like we'll see "Asshole Saturation" with this current crop of geniuses.

But this is all just an opinion of a cranky old "boomer". So what do I know.

Previous generations to the boomers probably thought the same about yours. Damned hippies.

Not my opinion but you know some had to feel that way.

Yeah, I love seeing all the feminists protesting rape victims in the middle east getting stoned to death.

Oh wait, they don't do that.

They complain about spreading your legs too far and then quote ridiculous rape statistics that have no basis in reality.

And then if you disagree they throw a temper tantrum or try to attack you.

What type of degree did you get?

Factory farming is absolutely inhumane and female animals are THE MOST exploited.

Vegans don't just stop eating FEMALE animals. Irrelevant to the point that to be a feminist you must also be a vegan.

Female cows, for example, are forced to be perpetually pregnant though artificial insemination, which is essentially rape.

Last I checked feminists weren't doing anything about cow rape. Please bring it up at the next meeting.

But I'm sure to you that is all just propaganda.

It's not even good enough to be propaganda. It's idiocy. It requires a gold medal in mental gymnastics to equate artificial insemination with feminist ideals.

Are you equating women's lives to that of livestock?

Or are you now elevating cows to the endless, infinite system of oppression?

I ask you now, should I ask a duck for consent before throwing it a piece of bread?