Trump: "I regret my words"

He is a great candidate. I am voting for him because of that and not your "Never hillary" malarkey.

I hate ideologues.That's what our politicians are.Democrat-here's your checklist,repubs -same thing.We are Americans and we should do what's best for Americans irregardless of political affiliation.

He was READING that. Someone WROTE IT FOR HIM. Sent him out there and said, 'your polls are absolutely tanking, you have to try something else.'

And his response was, 'okay, I can go out there and act humble for five minutes. No problem.'

And then tomorrow he'll be right back to being an unhinged fool. Even when he's right about some detail he pulled off Breitbart or Alex Jones or even the Enquirer, he doesn't do the homework. He doesn't understand what he's talking about well enough to actually discuss it in detail. He just blathers. He throws sound bites out and his drunken fans cheer. He's playing a part in a wrestling match, it's all scripted and you're buying it.

His ghostwriter, the real writer of 'Art of the Deal' said he had the attention span of a goldfish. If you're not talking to Trump about Trump, his brain just wanders right off.

And you want this guy making complicated foreign policy decisions and pulling the country in the 'right' direction for the next four years? He'd be impeached and/or arrested by the Joint Chiefs in mere weeks for ordering something illegal.

This is just Trump 7.0. All the other Trumps had fatal flaws but this version is going to be just as buggy, isn't it?

I'm astonished at what present generations think is 'presidential'. This is frightening.

This is superb news...and it was on the front page of CNN.com too! Maybe the networks are coming to grips with how BORING a President Hillary would be.


On the flip side, I'm holding my breath that this Donald is the one who will maintain his composure and stay on-topic. If he does, he can't lose on November 8th. Especially if the news media starts lining up to support him over his BORING rival.

While I don't entirely disagree with you, the alternative is far worse.

Well, it's about damn time he owned to something but I wish he'd be more specific and continue apologizing from here on out because this one general apology isn't enough for everything he's said since he announced his candidacy.

I wonder though, will he flip flop on his apology in a future rally?


And you want this guy making complicated foreign policy decisions and pulling the country in the 'right' direction for the next four years? He'd be impeached and/or arrested by the Joint Chiefs in mere weeks for ordering something illegal.


You do realize he is an international businessman right? A rather successful one at that. The left wing quacks that think and believe he has no clue about foreign policy are the real ones without a clue.

Seriously? One few second blanket apology from Donald Trump and you're all aswoon?

I can pull up Bill saying sorry about all sorts of crap he's done. Does that make it ok? Of course not. Now we're supposed to get a warm fuzzy feeling because Nero... I mean Donald Trump finally says something? Is this supposed to be a grinch-growing-a-heart feelgood moment?

No. This stands out only because of the contrast to the non-stop douchebaggery that is the Donald Trump Show which the pro-Trump crowd otherwise ignores/explains away/blames on the media.

I can't wait for his next non-teleprompter driven gaffe where he says something like:

"I could punch my supporters in the balls every day for a year, and all I'd have to do is say 'sorry' on the last day and I'd be lauded for my personal growth."

See what you don't get is that whole laundry list of apologies by the Clintons. Trump is apologizing for SAYING what he said and how he acted. Not apologizing for breaking laws and ruining economies.

Politicians don't mean "I'm sorry", the way normal people (like Trump) do. Politicians mean, "I'm sorry you didn't like what I said". There's a big difference.

You do realize he is an international businessman right?

Oh you mean he's a globalist? I thought that was bad?

The left wing quacks that think and believe he has no clue about foreign policy are the real ones without a clue.

How succesful Donald Trump is as a businessman is questionable and imo, probably the reason he won't release his taxes. It's also the reason he sues anyone who tries to estimate his wealth.

If you think that out-sourcing manufacturing of your clothing to China and running a few resorts in foreign countries makes a person some sort of foreign policy expert, you're nobody to be saying anyone else doesn't have a clue.


JacKatMtn
+5 more
posted on Aug, 18 2016 @ 11:23 PM
link
It will be a never ending attack on Trump following the talking/attack points delivered by the machine....

A machine that seems to be lacking a candidate out in public view rallying voters to her view of 2017-2020 America...

She can hide if they think it will win, but she's relying on the MSM to feed her message, fight her battles...

Trump is out there talking TO THE PEOPLE....

At some point, the machine will fail, and the people will speak...

I look forward to that day

I like this, his voice passed my lie detector test.

When in the thousand times he's lied in the last few months alone did his voice ever trigger your lie detector? I think it's malfunctioning. Did you unplug it? Is it under warranty?


Oh you mean he's a globalist? I thought that was bad?


Name any single company that does business 100% within America. Any single one, I dare you. Every single person on earth is a globalist right now.

How succesful Donald Trump is as a businessman is questionable and imo, probably the reason he won't release his taxes.

If you think that out-sourcing manufacturing of your clothing to China and running a few resorts in foreign countries makes a person some sort of foreign policy expert, you're nobody to be saying anyone else doesn't have a clue.


But, wouldn't that force someone to be aware of foreign trade laws by default? Not to mention local laws in said foreign countries? Also, lol at a "few" resorts.

Looks like the left is pretty worried about Drumpf and his public 180. All the skeletons are coming out of the woodworks to comment.

Yeah he's out there talking to the people. Leaking made up conspiracies to his pal at the National Enquirer, hiring the white Bill Cosby, Roger Ailes (why don't you try framing that as some man of the people thing, I'd love to see that) who essentially built the modern conservative media MACHINE himself and of course, let's not forget giving a job to Steven Bannon from Brietbart, heavyweights of right-wing propaganda (thanks for all the support Steve!). His former campaign manager is hired off to CNN. At least 2 of his surrogates are also on the payroll at CNN. 2 of his surrogates out of team that has grown too numerous to count who are on television and the radio 24/7 doing the day to day apologizing.

Un-freaking-believable how people are so taken with this clown.

Trump doesn't care about the people. Trump cares about Trump. Good grief. I'm holding my nose and voting for Clinton but the way you poor unfortunate folks swoon in a haze of delusion and denial over Trump is revolting.

posted on Aug, 18 2016 @ 11:34 PM
link
His Foreign experience sums up like this below. The moment he publicly supported ISIS Bank aka Saudi, I knew his handlers are an 'outsider'. I am sure he will be willing to back track on this to get elected as well. 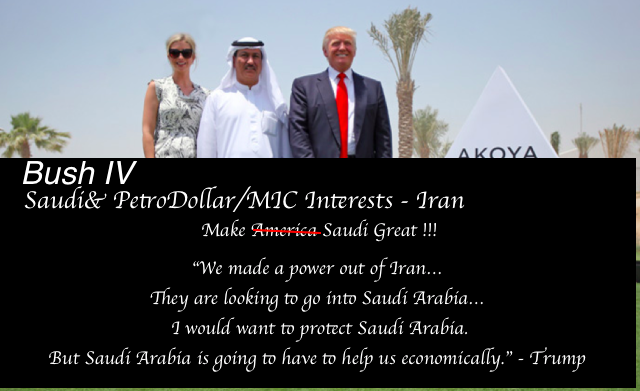 My dad is a die hard Trump supporter, his biggest complaint is Trump says stupid # which gives the other side too much ammo.

Pretty much every Trump supporter I have ever met.

What Trump supporters have you been talking to and how have we never run into the same ones?

Never met a Trump supporter yet that hasn't admitted pretty much from day one that Trump says lots of stupid #.
edit on 8/18/2016 by Puppylove because: (no reason given)

Wow your are in meltdown mode... take it easy...

I understand that we are at a tipping point as to whether the US survives, or the globalists win...

When the choice is a globalist vs an American, it's an easy choice for me...