*No record that Mrs. Clinton nor Her assistants took a *required Ethics Training class...

Now how could this be spun? Yeah I know, Mr. Trump hasn't revealed His taxes but these are not *Required..

Let Us opine that even if She were to take the *required class, due to published reports of Her behavior both pre-Campaign and all the while running a campaign, do You think She would receive a passing grade?

Now remember this was a *required Class in order to "serve The People.."

Here is the latest on the missed class:


Now here is something this "common passerby" thinks is way more important. When She was the Head of State they "misplaced" $6B BILLION dollars; this was about the same timeline as the "missing" e-mails that is STILL in the "news"

But whether she would have followed it is the question.

From what we now know as fact, obviously she did not.

Dozens of lies proven by various government reports and comments.

In other news, has anyone seen her campaign schedule? All she's got scheduled until the first debate a month from now is fund raisers, as far as the eye can see.

I can't think of anything else to add to this topic so I'll just say I really just want to see her get hit by a bus.

posted on Aug, 18 2016 @ 05:11 PM
link
So due to Y'alls responses, I'm going to go ahead and alert the National Media that "Yes, Definitely Pass" and then maybe turn it into one of these polls that seem to all of a sudden matter...

To pass a polygraph a 'regular/non-psychopath will sometimes put rocks in the shoes and/or tape 2 copper pennys on the shins.. For Mrs. Clinton well...

Is this really the best the Democrats have to offer as candidates for office. Sometimes I'm ashamed to be associated with America.

I dislike Bill and Hillary more than I dislike 0bama & Michael (I mean Michelle) and George Bush Jr. Combined. I tried to add Bush Sr. in there but that would have tilted the scales back.

Using the words Clinton and ethics in the same sentence??? Has the world gone madder?

"An ethics class? BITCH PLEASE,I am Hillary mother#ing clinton, I got # to do, and another prison sentence to avoid">

Hillary Clinton Failed to Complete Security Training, Attend Breifings As Secretary of State as posted two weeks ago and the story in the OP shows what national security means to her.

She could probably pass the test depending upon the questions being asked.
I mean she's obviously intelligent and capable enough to learn what she needs to know.

But it wouldn't make any difference in her actions because I don't think she gives a damn about ethics personally.

It's like asking if a psychopath can behave themselves in normal society. Sure. They learn what to do and not do and what is a "normal" way to act around other people. It's not something they feel naturally or instinctively, but they still can do it because they learn the rules just like we do. But they only follow them because they choose to follow them for some reason. Whereas the rest of us feel compelled to follow them on a personal emotional level to some degree.

She could do the same. Probably very well too. She'd probably get an A 90 or more percent on that test but she wouldn't ever consider it to be important for her to follow. It's just something to know so she can pass that test.

I think many politicians and powerful people would fit that same group as well.

originally posted by: Swills
a reply to: JimNasium


He does not have to release them. If you don't like it then don't vote for him. No different than Obama and his BC and college transcripts. Not a requirement.

All Federal employees though have to take ethics and OPSEC courses every single year. They also have a competency manager that is suppose to ensure they take those courses. That never happened with Hillary and her staff. They also signed NDAs and violated them. They also swore an oath to follow above rules and regulations which they also violated. I know this because I'm a Federal Employee and these are ground rules for every single agency.
They broke those rules. The only difference is they are permitted to break them where as I am not.

originally posted by: Swills
a reply to: JimNasium

If he released them, people would freak.

It's tiring when people say hillary and Trump are the same, tho.

Hillary didn't take a bunch of "required" classes, did she.

Too busy soliciting around the world. 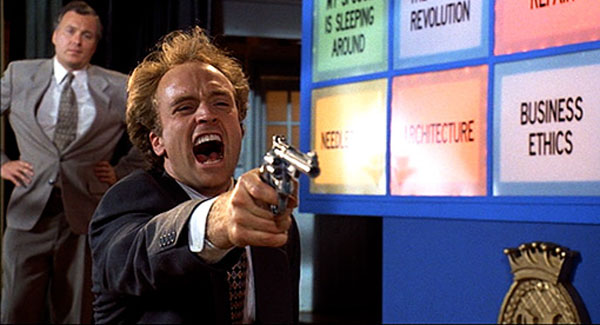 Pass it? Yes. She may be many things, most bad IMHO, but she's not stupid. She's anything but that.

posted on Aug, 18 2016 @ 08:51 PM
link
I really hope she doesn't use this as an escape hatch. That human jellyfish could wriggle through a keyhole if the reward was high enough...

posted on Aug, 18 2016 @ 08:55 PM
link
Don't you know that only those that aren't in lock step with the liberal agenda are required to take those classes?