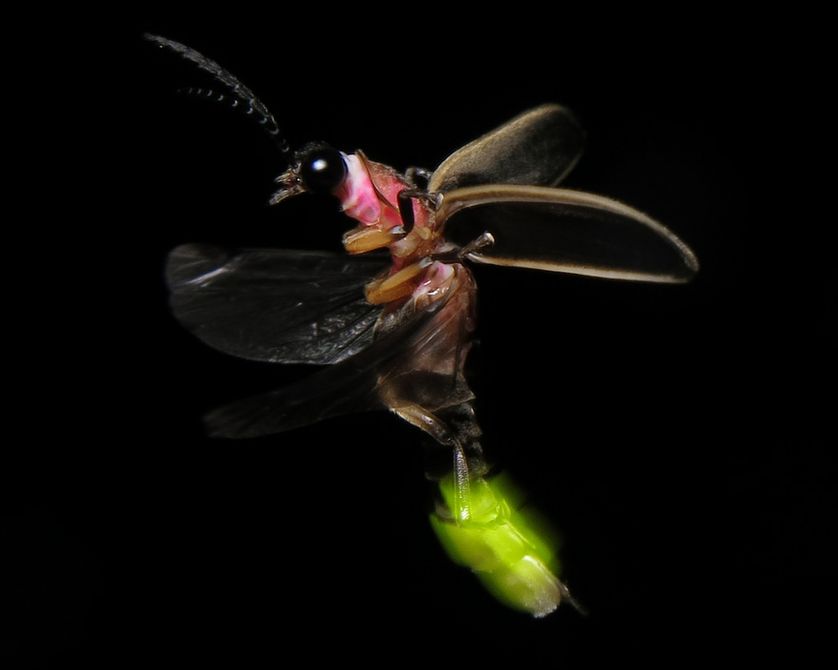 Every night these little creatures put on an amazing display for me right outside my door. Such talented little light artists, it always amazes me how they seem to synchronize their performance perfectly with the symphony of sounds from the other animals of the night. Each night I sit and watch my own personal light show, and listen to the musical score of the frogs and crickets in wondrous delight. It is such a beautiful thing. And today I felt that maybe it was time to let others know of the beauty behind the lightning bug...

Estimated to be between 128-145 millionyears old..lightning bugs have gone through periods of ..well..not being lightning bugs. According to this study, it has been proposed that fireflies have had 2-3 losses of Bioluminescence and 6-7 gains with regards to adult Lampyridae. But even now, some species do not have the capability to glow. In the United States for instance, species found in the west are most likely not luminescent. They would rely on scent/pheromones instead of visual to attract their mates, while both scent and sight are used in the mating rituals of the bugs on the east side of the continent...with many variations of the two combinations found in between and on other continents as well.

When fireflies come into our lives they are there to guide us to ways of living that are more earth-friendly, and soul-friendly. Fireflies teach us the value of living simply, and relying on our own inner voices for illumination. Fireflies also come to us with a message of creativity, and remind us that our paths are made lighter by the beauty that we allow into our lives. more

The Legend of The First Firefly

From then on, every time the fireflies wanted to go out during the dark night they would each bring with them these small torches of fire then come out together to roam leisurely around the bushes, fluttering from one sampaguita plant to another. That was how and why the fireflies today have light at the end of their tails. more

The Adze
The Adze is a vampiric being from Ewe folklore in Togo and Ghana. It normally looks like a firefly, but it will transform into human shape when captured. In its human form, the Adze has the power to possess ordinary humans and turn them into witches. more

The Chinese thought these twinkling little creatures came from burning grass.
A European legend warned that if a lightning bug flew in the window, someone was going to die.
Aztecs used the term firefly metaphorically, meaning a spark of knowledge in a world of ignorance or darkness.
American Indians collected lightning bugs and smeared them as decorations on their faces and chest.
In Japan, the firefly’s mystical light has been a metaphor for passionate love in poetry and “Their eerie lights are also thought to be the altered form of the souls of soldiers who have died in war” 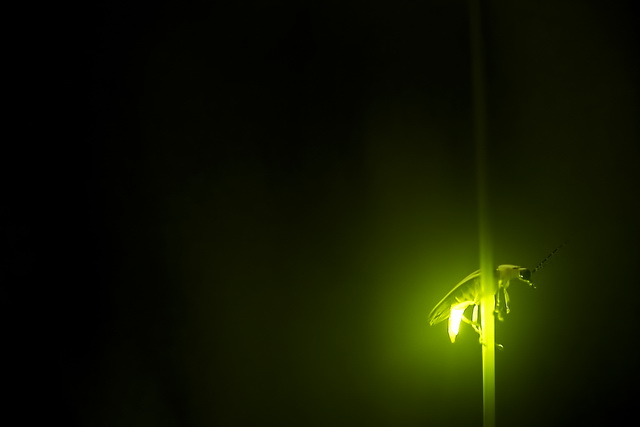 The scientific name for the compound that helps fireflies light up is luciferin, which comes from the Latin word lucifer, meaning light bearing.

Five chemicals--adenosine triphosphate, luciferin, oxygen, magnesium and luciferase--are bound up in the firefly`s abdomen by a chemical enzyme. When nerve stimulations release another chemical, inorganic pyrophosphate, the bond breaks and the reaction produces light on the sides of the insect`s abdomen. more

The firefly light is the most efficient light ever made, using close to 100% of the energy created from the chemical reaction. Our man made light bulb only uses 10% of the energy as light, the rest lost in heat. Yep...nature still does it better than us...

The light of a Firefly is called a cold light or a light that does not expel heat. If my understanding is correct, the beetle (yes, they are classified as beetles, not insects) can emit the light by taking in oxygen which is then mixed with a chemical called luciferase. The beetle can control the amount of oxygen and the length of time the light "glows" on its own. Scientific explanation 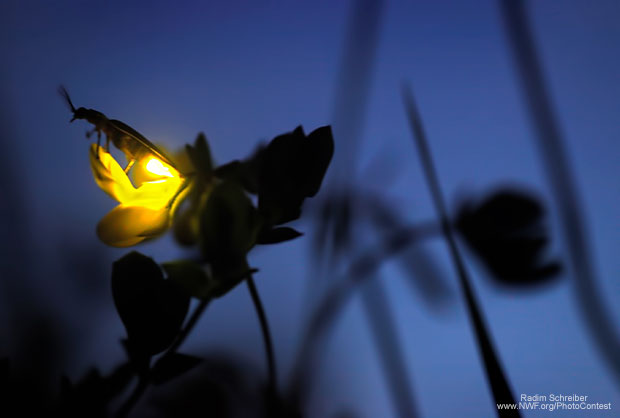 In the medical field doctors have been using the light from lightning bugs to find tumors, track viruses, and quite possibly, could be one cure for some types of cancers. So, it has far reaching potentials that still have yet to be found.

In a new study, researchers from London inserted the firefly gene that activates bioluminescent light into modified cancer cells, hoping to set off a chain of events that has a proven track record at fighting the disease. This light source, known as Luciferin, caused the modified cancer cells to glow much like it does with the firefly. When a photosensitizing agent was added, the combination proved lethal.
"The cells produced enough light to trigger their own death," said Dr. Theodossis Theodossiou of the National Medical Laser Centre, more


Plenty more to be found on this little creature..they are mentioned in a lot of folklore and superstitions. But one of the saddest things I read about this beetle is that their numbers are dwindling. You see, a lightning bug doesn't migrate, and if we, as humans, decide to develop a plot of land that they reside in, they do not just go find somewhere else to live...they cease to exist in that area.

So, this little light that shines so bright, shines no more every time we decide we need a new parking lot or convenience store and take away their natural living environment in order to make one..a sad thing really, when we think of how much they have given to us and our cultures, plus how much they still have to offer by way of medical research and advances..


Thanks for reading,
blend57

Sometimes, it's the simplest and common things that can stir the most wonder, if we are but aware!


Thanks for this piece on an increasingly boring ATS.


I miss the numbers of them I used to see in central Illinois, but I draw comfort in the very few I see these days in my wooded back yard in central Texas. The rainy weather has helped their numbers it seems.

Some times I notice only a solitary flash moving around the yard for hours. I put a lot of mental effort, silly as it may seem, in wishing each flash is met with an appropriate response from the other half of the equation. Life must go on.

One of my favorite times with my niece, is when she was about 8, and came and stayed the night with us. Hubby wasn't home, so she and I went out and collected fireflies in her bug basket. I told her she could keep them in the house overnight, but we would have to let them go in the morning.

Hubby came home around 11 pm. He said the living room actually looked really neat, with the fireflies flying all over. Apparently there were a few holes in the bug basket. My niece was just disappointed she didn't get to see the inside show.

I love to watch them as well..very peaceful to do so..I have always wanted to catch some..but, just couldn't bring myself to cage such pretty little things. For me, it is much better to leave them in their natural environment.

With that being said..my sisters had no inhibitions about doing it..and it was quite fun watching as they tried to catch them. Thanks for sharing your story. An indoor light show sounds like it would be beautiful..

You do tend to hope each one finds their match..in some areas, it is the male who flashes his light repeatedly and the female waits on the ground, only returning a flash when she finds a suitable mate..so, I always try to see if there is a return flash at ground level..hoping that each one finds love..

and then I remember some of them die shortly after mating.....

Nature has a lot to offer..simple, but very complex at the same time..just love to learn what I can, when I can..and that causes me to appreciate it even more..

I appreciate you taking the time to stop by... Wish I could've put more information in the OP..but, for some reason..it has a word limit..and I hate to separate the thoughts of an OP into 2..I always like reading the main subject matter in one post and the thoughts of ATS members in the subsequent ones...

Anyhow, hopefully you found something useful within it..