The Hardest Job in the World: Donald Trump's Campaign Surrogates

No it's the American people who want her.
The polls show it to be true. But of course any poll that doesn't show trump ahead and winning is rigged. Everybody knows that.


If the American people all want her, why isn't she polling above 49%? Shows the majority of people don't want her (or Trump for that matter). For instance in 1980, Reagan got over 50% of the vote. Hillary will win in Nov. with the lowest percentage of any presidential nominee in the past 60 years. I guaranty it. She'll join the other 10 presidents, including hubby Bill, who won without getting over 50% of the vote.

10 Presidents Who Won with Less Than 50% of the Vote
www.toptenz.net...

she has lost support, Trump has only gained support.


originally posted by: atrollstalker
Actually, I think the hardest job is trying to keep a straight face as Hillary is giving a speech about believing women who cry rape.

Rape is clearly a laughing matter to you is it?

I think you missed the point or haven't you heard about Juanita Broaddrick?


originally posted by: dukeofjive696969
Bernie did not sell you out, he said when he started running that if he did not get the nod from the dems he would back the candidate that woukd win.

But do enjoy trump, your the one selling out.

No I'm not selling out, I'm sticking to my stance against corruption. Anymore accusations with no basis you want to throw at me?

You claimed bernie was a sellout then say your going to vote for trump, no facts in what you posted just an opinion, how can one believe in sanders then change to a trump vote.

Because the options were Bernie/Hillary for the DNC nomination. First I supported Bernie because it seemed he had the best chance of knocking Hillary out of the race. He also had his "supposed stance" against Corruption, which is my main concern. Well the DNC decided they were going to rig the election by colluding with the media and Hillary's campaign, which made me hate Hillary even that much more. Now the next president is definitely going to be Trump or Hillary. Well Hillary's corruption goes against everything I stood for in the first place. I'd like to vote 3rd party, but that vote just decreases Trump's odds of winning just as much as Hillary. So I'm going to directly attack Hillary's chances by voting for Trump.

Now go ahead and twist my words just like every other Hillary supporter does over and over. Here I'll even quote my own words so you can read them again.

I was actually a Bernie supporter due to his stance on Corruption, which by the way is still my stance. Well, Bernie sold me out and left me with no choice but Trump to try and keep Hillary out of office.

I even bolded the important parts so your not confused again. So yes, Bernie did sell me out because my stance is against the corruption in government. When he backed the candidate who he himself claimed was Corrupt, I'd consider that selling out.
edit on 18-8-2016 by amicktd because: (no reason given)

originally posted by: AmericanRealist
a reply to: UnBreakable


I could only hope.

You are simply reading and listening to the wrong news. The polls are slanted. I learned that in Statistics 101.

Reply to the wrong poster? I'm unsure what you're referring to.
edit on 18-8-2016 by amicktd because: (no reason given)

If she wins by 1 that's fine with me.

I thought you were going to say the hardest job in the world would be the US Ambassador to Libya serving under Clinton. None of the Trump staff are dying.

Garry Johnson is a far better candidate and he is an alternative, but people feel they must vote for the two party crooks and liars.

Just think if we didn't have a party system! Every candidate running for office would have a fair chance of winning. No more party platforms, and candidates could speak their mind and not worry if they took a liberal or conservative stance on an issues. Voters wouldn't have to choose between the lesser of two evils and PAC money could be made illegal.

Holy cow, trying to put out fires for Hillarys leaked emails is 24/7 job that no staffer can keep up with. Not to mention the Vertias videos that even my Mom saw on TV, revealing the corrupt practices by the Democrats. Trumps support staff probably have fun. Hillary throws tantrums and objects at her staff.

Hillary Clinton hits Trump on temper, but she’s no picnic, either

Thanks for the bump, are you searching for my old threads?

posted on Nov, 8 2016 @ 12:02 AM
link
Yeah the media in bed with Hillary that rushed this out early! I guess when the Media is giving you all the debate questions and all the positive coverage, it IS easier than working for Trump against the corruption and birddogging. 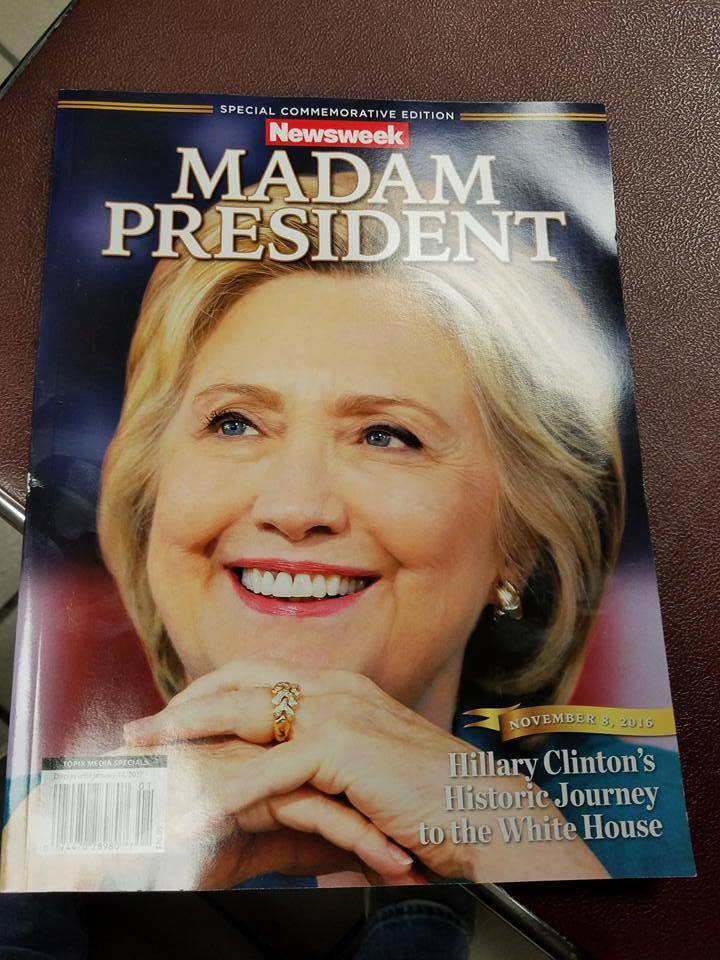 Newsweek Calls It: "Madam President Clinton" Hits The Shelves Due To A "Business Decision"

SudoNim I seem to remember you were skeptical of my fact checking. Well, I called this Nov. 1st in another thread with visual evidence, remember?

Project veritas part 1 Rigging the election
edit on 8-11-2016 by thepixelpusher because: (no reason given)

posted on Nov, 9 2016 @ 01:04 AM
link
Okay, throw those Hillary Special Editions away and buy this. Guess the Trump campaign people will have it a lot easier working in the Whitehouse. 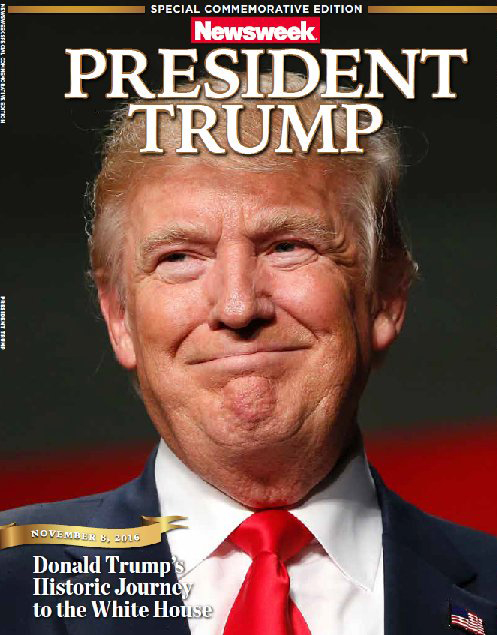 No, but I'm guessing you are right now, unless you voted Trump. If you voted Trump, thank you. You helped to save us from Hillary and her corrupt scandals.