posted on Aug, 17 2016 @ 10:12 PM
link
TIL that India has kite fighting competitions in celebration of India's Independence Day and according to Wikipedia, the sport of kite fighting is actually quite widespread:

Fighter kites are kites used for the sport of kite fighting. Traditionally most are small, unstable single line flat kites where line tension alone is used for control, and an abrasive line is used to cut down the string/line of other kites. Kite fighting is done in many countries, but is particularly associated with Afghanistan, Bangladesh, India, Nepal, Pakistan, Vietnam, Korea, Thailand, and Brazil.

According to the section on India, the fighter kites are known as patang and kite fighting competitions are most popular during the festivals of Basant aka Vasanta (in the spring) and Makar Sankranti (fall/harvest) and more recently on India's Independence Day. As is referenced in the title, the kite fighters employ the use of a glass-coated string called manjha which is apparently imported from China. Here's a picture of the string on spools from One World Trading: 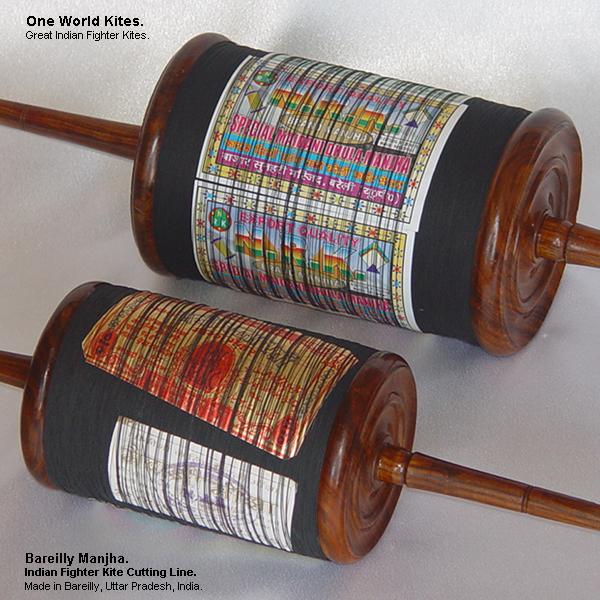 Tragically, this year during the Indepedence Day celebrations, three bystanders, including two young children, were killed by the razor sharp strings:

Sanchi Goyal, 3, was riding through New Delhi Monday together with her parents when she was cut about the neck by a sharp kite string as she popped her head out of the car's sunroof, the child's devastated uncle said. In a separate incident, a 4-year-old identified only as Harry had his throat slashed in a similar manner while looking out the sunroof of the car he was riding in. The third victim, 22-year-old Jafar Khan, fell off his motorcycle after also his throat was sliced by a kite string that tangled around his neck. Falling off his bike, Khan suffered a fatal head injury, his father, Ayub Khan, said.

Isn't that like sticking your body parts out of the open windows of the car and simply something you should not do?

Respect to the dead an everything but I just got a mental image of a 500 body count piled in the middle of a road next to a bunch of oblivious kite flyers.

posted on Aug, 17 2016 @ 10:16 PM
link
Yikes.. That is pretty bizarre. I would think something like this would have happened much sooner.

I'm not ready to condemn any parents with such scant information but it does make me wonder how much, if at all, vehicle speed played into the severity of the injuries.

Horrible but yes, now that you say it I can clearly envision a giant pile of chopped up corpses and red stained kite strings zipping to and fro splattering blood droplets everywhere.

Just pointing out that I'm pretty sure we've already had a few 2nd amendment types in here who have said nothing about the potential kite ban (the fact it happened in India aside).

Not a very good spectator sport.

Kites would'nt be used to defend yourself from domestic threats.

S&F for finding this. Really bizarre. When you're dealing with vehicles and getting tangled in things it never ends well.

It's a shame some people need to loose a child to learn common sense.

posted on Aug, 18 2016 @ 12:09 AM
link
Diane Feinstein will be seen holding up an EVIL KILLER KITE and demanding that these intruments of Death be Banned especially those that have a pistol grip handles for controlling these Evil killer devices

It was on the news yesterday and sounds absolutely awful. If you've ever been kite-flying, you'll know how fast the ribbons and lines can move and how much power they can store. I guess they have more power when the line is given the extra weight of razors and/or broken glass. It's easy to imagine how little force is needed for a sharp razor blade to slice skin.

The sheer unlikelihood of the string catching the throat of a child seems bizarre and yet we buy lottery tickets...and some people win.

This has happened before over the poor areas of Brazil. There was a thread once that also showed a guy with a cut throat. Iirc Brazil banned the glass-coated lines too.

you obviosuly not been on indian roads, health hand saftey dont mean nothing theire. there have been lots of deaths of this nature with Kite strings. nothing new.

sadly common sense could of helped these people but kite flying is a very exciting time for them .

originally posted by: ketsuko
What were kids doing looking out of sun roofs?

Isn't that like sticking your body parts out of the open windows of the car and simply something you should not do?

I guess you have not done any third world traveling??..

The put toddlers on the handlebars of motorcycles here in south east Asia, all whilst carrying a further 3 people on the Pillion seat, and do not even ask about helmets...

originally posted by: Swills
a reply to: theantediluvian

It's an ancient tradition.

Where the participants aren't just using their skills to do stunts, but are instead flying their kits with the aims to cross strings and slice the other kite free.

I've read descriptions of it a couple times in various books. It actually sounds exciting, but of course, it would be dangerous if you were doing it in the wrong places and didn't have good control ... like flying a regular kite near power lines. Right?