. . . she took hold of the second male by the collar and banged his head against the cash machine three times . . .


There were three of them. They got the money, but they got caught through CCTV and they all got sent to crime school.


The court heard Stoica had numerous previous convictions for robbery while the other two had no record.

Defence teams for the men described them as “having made a terrible mistake” and told the court they were each struggling financially.

Stoica, 19, of Broom Lane, Levenshulme, was sentenced two years in a young offenders’ institution; Geblescu, 18, of Victoria Road in Levenshulme to 18 months; and Dumitru, also 18, of Longden Road in Longsight, to eight months.

Robbing someone by mistake. It doesn't make sense.

posted on Aug, 17 2016 @ 11:38 AM
link
Good on her. It's getting high time people stopped being victims and started fighting back.

posted on Aug, 17 2016 @ 12:06 PM
link
Good on her for fighting back. It's too bad the borders are so open with no vetting of who is let into the country. Why Stoica received only two years while several robberies are on his record is just stupid. Also, all three are immigrants from Romania. 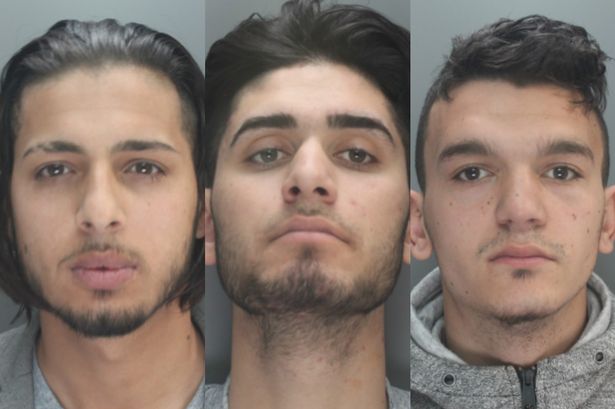 Piper Dumitru, Florin Geblescu and Felix Stoica, all Romanian teenagers living in Manchester, were today locked up after pleading guilty to robbery.

Those people are all from area in Manchester which is Longsight and the bordering neighborhood of Levenshulme.
When I went back there all the local community complained about the Romanians and Albanians being horrible thieving b@stards and that's saying something as we were already a bunch of scallywags.

posted on Aug, 17 2016 @ 12:43 PM
link
The sentences doled out to criminals these days are ridiculous. and "made a mistake"? Sorry, but committing a crime like this is simply not a mistake. They knew full well what they were doing.

originally posted by: iTruthSeeker
The sentences doled out to criminals these days are ridiculous. and "made a mistake"? Sorry, but committing a crime like this is simply not a mistake. They knew full well what they were doing.

I think the real mistake was to rob the place when she was there. Now, that I can believe was a "mistake". These scum should serve real time, in real prison. Not some educational facility. These are not kids that strayed, these are adults, welcomed into a strange country to make a new life. Perhaps that too was a mistake?

Lets hope they are all deported once they serve their sentences.

Once we are out of The E.U. there is no obligation for The U.K. to let them stay.

posted on Aug, 17 2016 @ 02:46 PM
link
Seeing more and more of this. Oldies stepping up. Fukushima was the one that I found most moving. Japanese retirees telling their government to not waste young lives, they would go in to clean up. People whose lives had already been blighted by Hiroshima/Nagasaki, ready to form suicide squads. That's what I call extreme nationalism.

Shame their offer was rejected. One wonders why.

Definately, they should worry more about the criminal syndicates like government though. Better to pull the weed up by the roots instead of trimming the edges.

posted on Aug, 17 2016 @ 05:49 PM
link
There should be stricter laws enforced for victimizing the elderly or disabled,imo.Good for that brave lady.
edit on CDTWedpm3561 by TDawg61 because: (no reason given)

I personally know at least 4 people in Levy who have been rolled and robbed by the romanies, from crowding the person whilst intoxicated and "helping" them home through to violent, targetted street robberies.

Longden Road, why does that not suprise me!

The fact they`re now (illegally) driving out to quiet villages and targetting elderley people at cash machines is worrying. The sentences are ridiculous for what they have done.

Luckily this old woman fought back. And at 77! That is fair play to her, but a lot of 77 year olds are no where near as resilient, physically or mentally. They should have made an example of these 3 but i think it`s 2/3rds off your sentence if they put in a prompt guilty plea.

Hardly a deterrent to people of a similar persuasion. imho.

posted on Aug, 18 2016 @ 01:12 AM
link
I live in a tiny town in west yorkshire....we get shops putting up notices warning of Romanian/Albanian shoplifting gangs on the prowl. They bus themselves into various areas each group taking a different town apparently then all meet up at the end of the day and share the spoils. They usually operate in couples. Two shops got done over week last Thursday...however, one shop owner gave chase and caught the sh*t and beat seven bells outta him and the thief's "wife" was nowhere to be seen. He got the contents of his till back though. Gotta love this multi culturalism in action

Romanian immigrant's, Liverpool has always been an international city, it was once one of the busiest port's in the world and was known as the Gateway to America so there are many Liverpudlians whom have ancestors all over Europe and beyond, notably the Caribean and China but they are mostly the best folk's you could meet.

These nasty little unmentionable's are not Liverpudlian's though, yes they live here but at least there is one really decent up side to brexit in that when we are out of Europe we can expel these eastern European criminals once and for all, there are decent eastern European's and Romanian's so that is not directed at them but like many brit's I am sick and tired of this spate of Eastern European criminals that have taken to targeting OUR Pensioners at cash machines, self service checkout's and scamming them.

We had two Romanian's in a Tesco not far from liverpool whom used a distraction technique to rob an elderly couple there, one stood behind them watching them put there pin into a self service checkout and the other dropped a five pound note just in front of them as they left the shop in the foyer then stopped them to ask if it was there's while the other whom already had the pin picked there pocket for the card, it happen's so much that the police up and down the country are literally jaded about it as well as having to put up with the red tape of dealing with so many people whom have no respect for other people let alone the law of a country that is not even there's.

Yep, Mr's Peel, sound's like something my mother would have done and there are peel's in my family, I wonder if she is one of my relative's, oh to have had a camera for that.
edit on 18-8-2016 by LABTECH767 because: (no reason given)