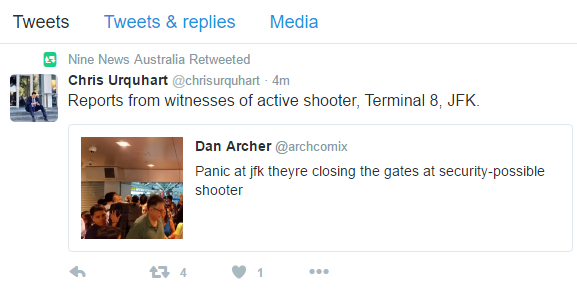 This just came across my twitter feed - I'll post updates as they transpire. I'd appreciate any ATS members in the area weighing in here with any information on this report. 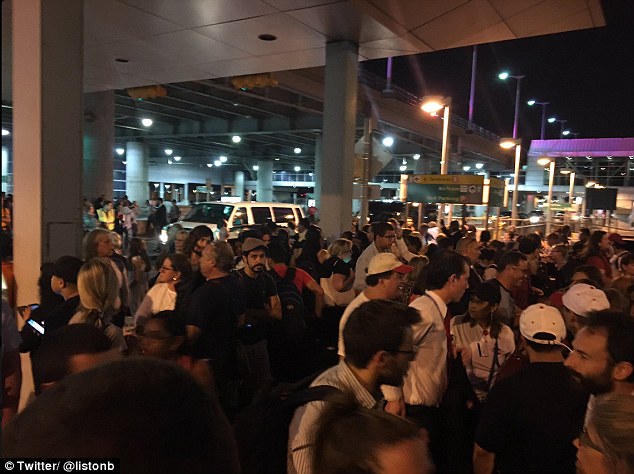 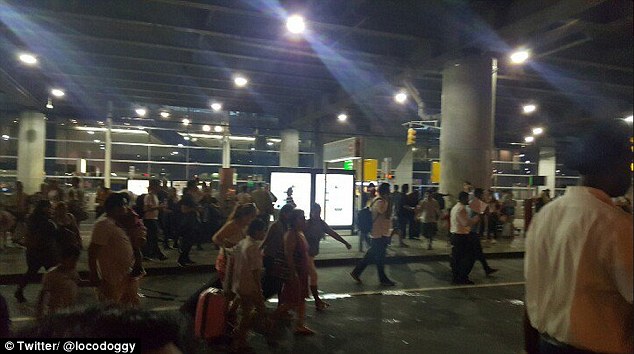 olice are responding to a call of reported shots fired within JFK Airport Sunday night.

Reports of a shooting happened in Terminal 8 around 9:30 p.m. Witnesses tell police they heard two shots fired within the terminal.

Police are evacuating the area while they search for a suspect.

So either someone managed to sneak a gun past (not really hard according to recent TSA testing reports) or it was the security themselves discharging rounds in response to something.

Or maybe someone had some fireworks and thought they would get some internet fame by playing some sick prank... I hope its that one.

(probably not security discharging according to the reports, they don't seem to know much.)
edit on 14-8-2016 by chronfucius because: (no reason given)

Lots of cops. Not much else.

JFK Airport:
-Shots Fired Report
-Terminal 1 & 8 Evacuated
-No Victims Found
-Investigation Ongoing
edit on 14-8-2016 by opethPA because: (no reason given)

Wtf? first that mall and now this?

I dont care how "useful" it is now to who ever.

We will be throwing rocks at eachother for food, all of us.

This is not something that should be routine nightly news. I am less shocked with each new incident. So is much of America.

(As a cable guy, I usually flip through the news while checking channels. Every now and then I ask clients what they think about whatever headline is on. They just ask what channel HBO is on.)

This kind of desensitization and apathy will be our end.

They don't need to take away our guns, just our spirit.

This is the third world war as predicted by Nostradamus we have seen the emergence of a new emotionless type of soldier, incapable of compassion and indiscriminate with who they kill.

This war has no clearly defined battle front and the deaths, while fewer than conventional war are traumatic to a lot more people.

Ignoring the enemy, because it's not a political correct enemy, in my opinion is worse.

Take it as ISIS or BLM.

Don't you think, the law biding, citizens of Milwaukee are worried about BLM riots?


With all the BS that is going and with security being "supposedly" upped inside the airport, was there not a intelligence report about 2 months ago that said if large crowds where outside of the a terminal building that they had un-covered a direct threat to peoples at that location from the usual suspects Daesh.


The idea was that to avoid anyone getting into a terminal with a weapon the first security check was going to be at a secured location outside of the building rather than how it is at the moment after check in. This protocol was not used however as you have simply moved a large crowd from inside the building to outside.

Well look at the pictures in the Daily mail link, would it not be of interest for a terrorist group to call in a Hoax to see how it is handled to then plan something for the evacuated crowds outside next time round???...

Any call to authorities regarding a active shooter should not be just put down as a prank, I hope they are looking much deeper into what actions could follow..

originally posted by: autopat51
a reply to: markosity1973
no clear enemy..


Not really certain this statement can be correct???... It is fairly obvious who the enemy is, you can debate about how they became the enemy granted but the fact remains that radical Islam is very much the enemy and I would go as far as to say Islam in general has a lot to answer for as there is not a massive amount of noise coming from the moderate Muslims condoning the actions from their brothers and sisters worldwide. For a religion of peace they have a high body count and a copious amount of blood on their hands..