Mandela Effect: I come from an Earth where evolution took a slightly different turn

posted on Aug, 14 2016 @ 01:23 PM
link
This is my "the human (and other animal) anatomy plan has changed" thread, I suppose. From my perspective anyway (and who knows I could be insane or a victim of some elaborate memory implantation psy-op - though the latter I doubt), I have seen the human body go from one morphology to another strange and somewhat beast-like morphology that we call the "norm" today. This occurred rather suddenly I believe around late 2014. I became consciously aware of the human anatomy changes early this year when being prompted to google human anatomy. I felt that deep unpleasantness in the stomach (which is now weirdly higher up, under a lung) that many ME-ers report when they notice a thing has 'changed'. It wasn't my memory of human anatomy. Everyone looked elongated at the waist and with bulkier shoulders and neck areas. What was happening to me?

Anyway I may never get to the bottom of what has happened to me and others who report anatomy changes. Maybe we are all delusional in a very specific, serendipitously correlating way. What is clear though is my general knowledge of the old anatomy. I've decided therefore to draw what I can remember of the 'old' anatomy and its configuration and compare it with diagrams of today's anatomical norm.

Here's my first comparison of male skeleton and flesh from the front to give an idea of what I mean about the "old" or "parallel Earth" anatomy: 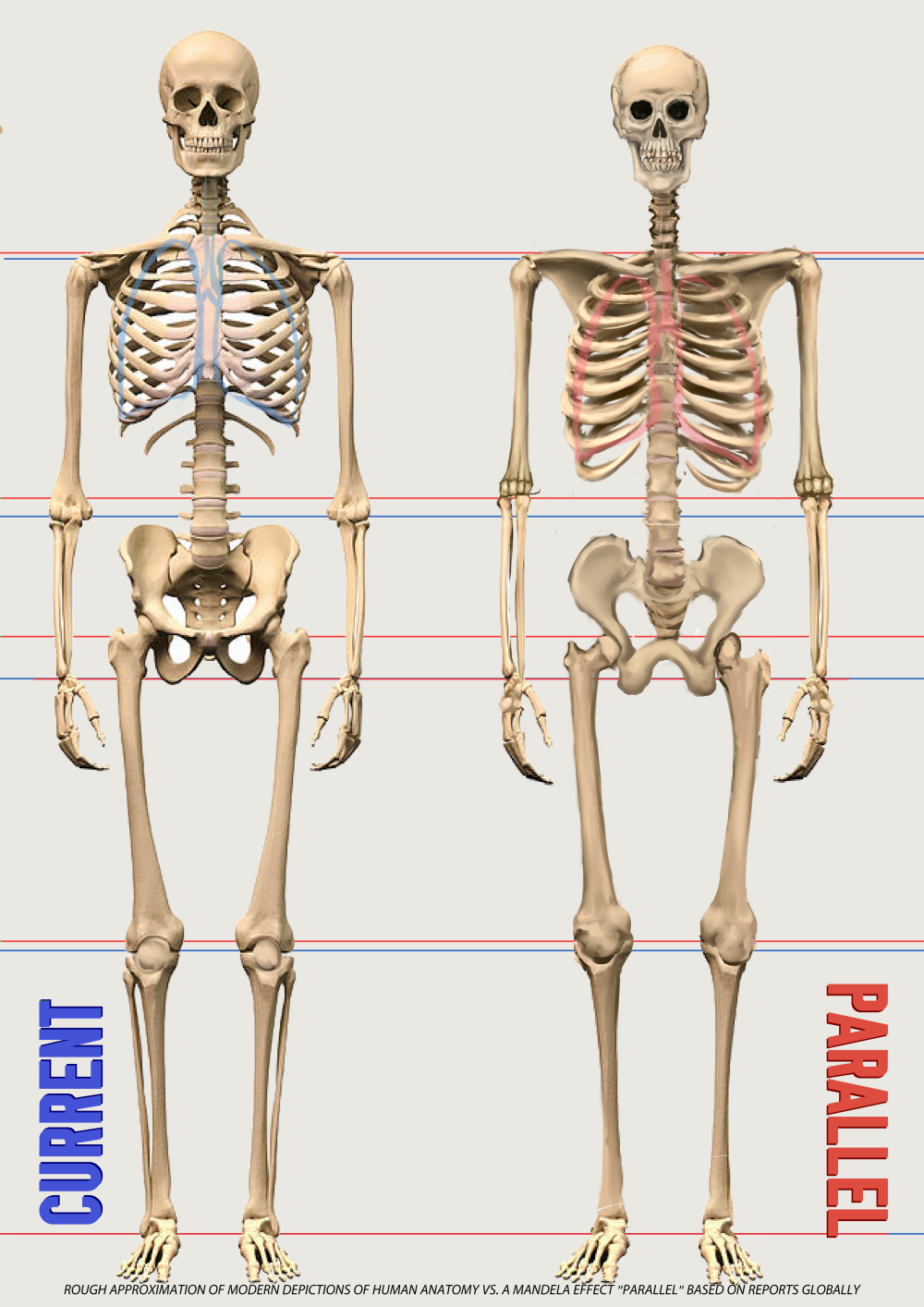 Its not perfect but its an example of how different the ribcage and hips were as well as proportions of bones and the skull/jawbones. 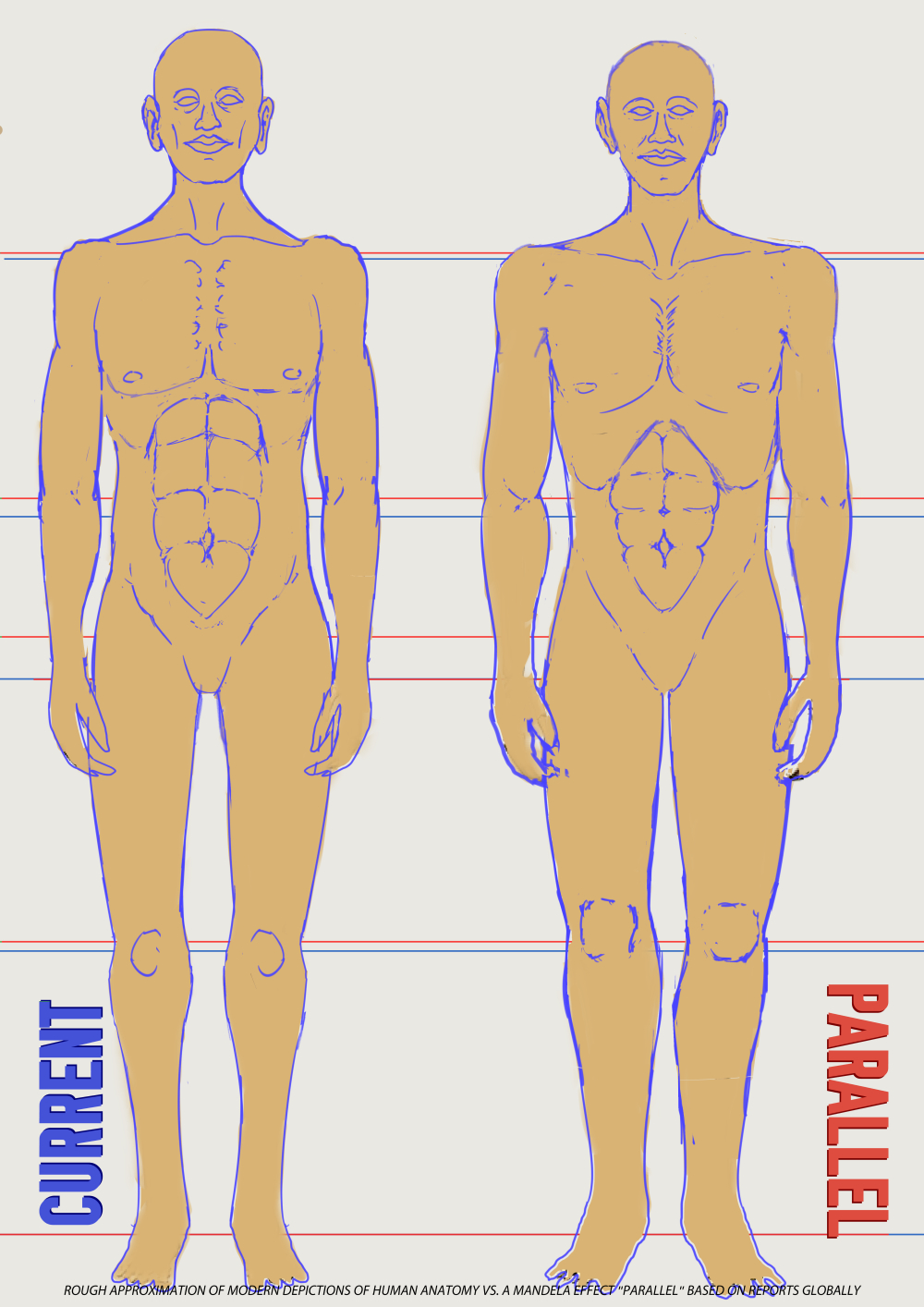 Also take a look at the abdominal muscles. Way different, they go right up to the breasts in this universe.

I'll do internal organ comparisons at some point as well and post them in this topic when they're done.

Also guys: take note of thighs and hair. Is anyone else abnormally hairy in places they never were before? Weird hair too, wild, dog-like.

However, I do recall the ribcage looking more like your parallel world.


I must have been wrong about that.

originally posted by: Orborus
Is anyone else abnormally hairy in places they never were before? Weird hair too, wild, dog-like.

originally posted by: watchitburn
I don't believe you.

There's never going to be any evidence as he's already stated his anatomy changed suddenly in 2014. Then the other ME believers will come and say it's not bad memory or poor education, but a 'feeling' that tells them they are correct and we are wrong not believing it...... same thing happens in all the Mandela threads.

I think this Mandela Effect is getting ridiculous now.


originally posted by: watchitburn
I don't believe you.

...... same thing happens in all the Mandela threads.


And that there is the real Mandela Effect!

Looks like you guys over there had some MASSIVE problems!

Looks like your necks could be snapped quite easily.

Your knees would not bend easily.

Shin bones must snap a lot with the lack of support.

So over there everyone has very short bicepts and very, very long forearms???

And last: the skull.........I guess we all look horribly ugly. A skull structure like that means faces are going to look hugely different than here.

BTW - your second picture? Sorry.....muscles are not going to match that skeleton in the first one.


In my parallel world frogs asses were not water-tight. I'm sure you can imagine their dilemma with this.

In mine they actually licked humans to get high...frogs hallucinating is a very ugly sight to see.


This is my "the human (and other animal) anatomy plan has changed" thread, I suppose.

originally posted by: Rosinitiate
And that there is the real Mandela Effect!

!!hahaha you are correct!

Looks like you guys over there had some MASSIVE problems!

I think in this timeline we are much better looking.
lol

Pass that along when you've finished with it.

The "parallel" diagrams are accurate to what myself and five other people close to myself (not all related) know our bodies to look like. This has been verified in part by X-rays, CT films, and physical palpitations of the bones. Three of us have very prominent bones; if I stand naked in a mirror and raise my arms, I can clearly see my ribcage and my pelvic bones, and from the back, my spine and scapulae can clearly be seen.

None of us have ribs above the scapulae and clavicles. Our necks are still as long and slender as ever. No one's shirt size has changed. The arch of the pubic symphysis is still present and accounted for. Our shoulder to hip ratio is not inverted. Our skulls have not expanded. There are still the same amount of sutures in our skulls too.

I will not speak anymore about the who or the why of these supposed changes, because it doesn't matter. We are not from a parallel reality. Our bodies have not changed in the least. The depictions on the internet as our "current reality" anatomy are not accurate.

If you suspect you are the victim of a psy manipulation, then it would be a wise move to research the overall effects of such manipulation on the human psyche and then ask yourself how many of them could be affecting every single aspect of your life. Part of the illusion is dependent upon the very well-documented distortion in perception caused by the oldest trick in the book: the power of suggestion.

It would then be also beneficial to look up the medical phenomenon called Hypochondria. Most people assume that it occurs when an individual wants attention and fakes physical ailments to get it. However, that is not the medical definition at all. It can also be deliberately induced, and quite easily.

My suggestion would be to go to a chiropractor. A reputable one will get radiology films of your skull, neck and entire spine before doing any adjustment. And they will show them to you. You can also obtain a copy. If your films show an actual change in your skeletal anatomy that matches your "current" diagrams, then you can have cause for worry.

A couple of us actually started to fall into the terrifying trap of believing that things about our bodies have changed, despite the assurance of the rest of us that they didn't look any different. So we got X-rays. No short necks or bulky shoulders from protruding extra ribs. No shortened ribcages. Normal pelvic and pubic bones. Normal bone length. As I knew it would be.

What is more plausible; that we somehow swapped realities where everyone else has short necks and hulking shoulders and perforated coccyxes and a pelvis that leaves our reproductive organs exposed rather than cradled, tiny ribcages that are not compatible with the size requirements of the lungs to power a human circulatory system, that somehow we are the only six people in this new reality who have different skeletal structures and anatomy...or that someone/thing is deliberately trying, for whatever reason and by whatever means...like I said, that's not important in this context...to convince us and everyone else that this is the case?

Well, if you suspect you're being manipulated, then you have to realize that the manipulation will occur in more than one form. And once you begin to believe that the changes might have actually happened, the fear finds a foothold...and suddenly you start looking for physical evidence and before you know it, you seem to find it in spades. I know this has already happened to you, because you told us how much the information you were looking at horrified you. Well, either a seed was successfully planted, or your body really changed to the "current" version. The only way to be sure is to see your own skeleton.

Other good reference points are Body Dysmorphic Disorder, which can also be induced, and also how different brain waves can be induced in a waking brain that can further be used to alter perception. I would also strongly advise taking a break entirely from the internet and television...and discussion about the entire thing. Give it some perspective without outside influences. Then, look at the whole picture again with the knowledge you've acquired.

Good luck to you. Stay anchored. Answers will be forthcoming, I firmly believe that. I wouldn't say it if I didn't.

posted on Aug, 14 2016 @ 03:22 PM
link
This is not mandela.. This is because as niburu approaches the special ones dna changes to match that of our nephilin brothers..

You could be the chosen one..

originally posted by: Rosinitiate
In my parallel world frogs asses were not water-tight. I'm sure you can imagine their dilemma with this.