The K-77M was scheduled to enter service sometime around now. They were planning on 2015, with as late as 2019.

There's not a lot of exhaust heat from the lift fan, compared to the exhaust of the engine.


originally posted by: 727Sky
If a war started tomorrow without nukes would our less than 872, F22s be able to maintain a mission readiness against all the new Russian aircraft that have been made or upgraded (1400 was the count last year that I read) in the last 3 years ? Yes our air force has one heck of allot more than just F22s and the almost (but not quite yet) F35s.... A kill ratio of 5 to one or 10 to one seems to be the current thinking ?


The last time I was within earshot, I heard a confident voice state that no modern US jet could be taken down ... except by chance. IIRC, that same conversation mentioned the use of 'missile trucks' to minimize the exposure of US fighters to radar. That, and kill so much of an adversary's countermeasures as to make Desert Storm look like the training mission that it was. There was a real old acronym I might not be remembering correctly MFLP (massive, furious, lethal, precise).

Zaphod is in-thread and certainly has a more well formed opinion than mine. I know strategy and tactics rule over technology and sustainable numbers. Far less aware these days of the presiding opinions on air strategy. Even a general overview would be great to hear.

On a technical basis, ANY COUNTRY could do what the Israelis
are doing nowadays on their Anti-Aircraft/Anti-missile systems
which use Stereoscopic 4K Optical and Infrared Video cameras
on their Arrow Missiles (i.e. technically a modified Patriot
missile system) and doing PURE image recognition with
SOBEL edge and smooting filters detection:

Do some luminnace and Chroma noise reduction:
en.wikipedia.org...

Do a Savitzky–Golay filter for further smoothing anti-noise operations:
en.wikipedia.org...

Then do SOBEL edge detection:
en.wikipedia.org...

Then do some raster-to-vector image tracing:
en.wikipedia.org...

And finally do some hardware-or-terrain feature
"Face Recognition" comparisons:
en.wikipedia.org...

before you do your fire control and collision avoidance.

You can put this vision recognition technology on aircraft,
missiles, land vehicles, ships, submarines and even spacecraft
to do automated hunt, recognize and target applications!
The code is ALL open source and can be done by almost ANY
reasonably competent graphics programmer (even I've done one!)

This means YOUR system cold hunt for IR exhaust signatures,
aircraft/missile outlines and avoid flack, AA fire, even terrain
or buildings! Add in some return auto-return fire systems
and YOU TOO can be master of the skies!

I personally would not underestimate advances in the infrared spectrum.
youtu.be...

There's some physics in the way: infrared absorption in most bands. As well as longer wavelengths and more difficult detectors, especially if you want angular resolution.

IR sensors will generally see a 'dot' and not be able to identify too well.

There's a reason why infrared astronomy is mostly from space, with supercooled sensors, and large apertures.

They can use one of these too.

The future is here and it's insane what they can do now.

A new USB stick computer uses Google's machine-learning software to give drones and robots the equivalent of a human eye, and add new smarts to cameras.

Movidius’ Fathom Neural Compute Stick isn't your conventional PC. It is instead designed to analyze pixels and provide the right context for images.

Fathom uses an embedded version of Google's TensorFlow machine learning software for vision processing. The device can be plugged into the USB port of a device or a developer board like Raspberry Pi, which in turn can power a drone or robot. It needs a 64-bit Linux OS and 50MB of hard drive space.

originally posted by: Arbitrageur
"....it looks like all the heat signature is below the tail, so somehow the nose is being held up without much heat signature. 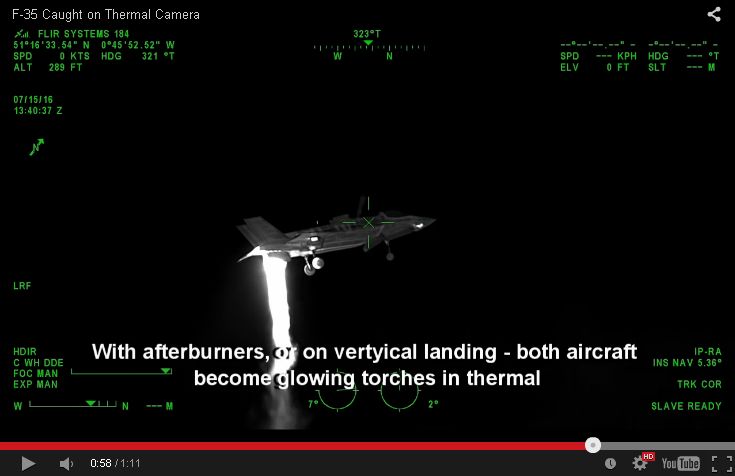 Well yes it would have very little heat signature around the nose because unlike the Harrier system of roll posts, the F35B is using a forward lift fan that doesn't have a hot exhaust.