Why Hillary Won't Release Her Speech Transcripts - There Are None!

Come on you can come up with something.
Nope she wasn't Secretary of state
Nope she wasn't a senator.
Nope she didn't have a job in any capacity in Washington in 2013 that would put her in any position to grant any favors.

She was just a private citizen. Unemployed as a matter of fact. Except to get paid to speak.
And I'm thinking you must have a list of the favors that got done right?
You're making an accusation aren't you? You wouldn't falsely accuse someone of something would you?

Now she had a brain clot. Who the flip are you Dr freakin Seuiss ? Making up stories as you go?
Utter nonsense.

Did any of those multinational billion dollar companies go out of business?
$250,000.00 is small potatoes. Sms.

posted on Aug, 14 2016 @ 08:22 AM
link
Why are these transcripts an issue? Are they going to ask Donald for the transcripts of his meetings?
He won't even show his tax returns which he claims you can't learn anything from anyway.
The speeches were how she earned a living. She showed the money she earned on her taxes which are online for anyone at all to see and paid 32% in taxes to the government for it.
Bernie for some idiotic reason brought them up during the debates . Now all of a sudden the people demand to know exactly what she did and said to earn money? Since when? Do any of the others have to say what they said to earn money. No.
Do they have to show transcripts of business meetings? Why not? -
You're right it's never going to happen. It's not protocol. Why should she be singled out? No other candidate has ever been asked to show transcripts of private speeches or meetings especially when at the time the candidate made those speeches that candidate didn't hold any position in government what so ever.
edit on 8142016 by Sillyolme because: (no reason given)

People don't usually launder money by depositing it into a bank and then claiming the income on their taxes.

originally posted by: Sillyolme
a reply to: Indigent

Did any of those multinational billion dollar companies go out of business?
$250,000.00 is small potatoes. Sms.

Exactly, $250k is indeed small potatoes to buy yourself legislation that could reap you hundreds of millions of dollars.

Hillary owes a lot of people.


How else do you launder dirty money, other than having fake books and banking it, would you put it in a washing machine.


The income tax is nothing, especially when the money is then put into the Clinton Foundation Charity and used as a Tax deduction.


Hillary Clinton Took 6 Months to 'Get Over' Concussion, Bill Says of Timeline

Your link that says "Hillary Clinton Took 6 Months to 'Get Over' Concussion, Bill Says of Timeline" leads to a picture of her with Leon Panetta. I was sort of hoping for an article where Bill said that.

Trump scheduled paid speeches to coincide with campaigning, he has made a couple milion from them. No one has asked for those transcripts.
edit on 14-8-2016 by reldra because: (no reason given)

originally posted by: gps777
a reply to: Sillyolme


How else do you launder dirty money, other than having fake books and banking it, would you put it in a washing machine.


The income tax is nothing, especially when the money is then put into the Clinton Foundation Charity and used as a Tax deduction.

Home
>
Politics
Hillary Clinton Took 6 Months to 'Get Over' Concussion, Bill Says of Timeline
May 14, 2014
By MARY BRUCE
Mary Bruce More from Mary »

Bill Clinton did more today than defend his wife, Hillary Clinton, from recent accusations leveled by GOP strategist Karl Rove that she suffered brain damage after falling in December 2012.

The former president revealed that his wife's injury "required six months of very serious work to get over," he said during a question-and-answer session at the Peterson Foundation in Washington.

"They went to all this trouble to say she had staged what was a terrible concussion that required six months of very serious work to get over," he said. "It's something she never low-balled with the American people, never tried to pretend it didn't happen."

But Bill Clinton's timeline appears to differ from official comments from the State Department at the time.

I'll have to see if I can find it, but I recall reading somewhere that a lot of her "speeches" were actually just pre-recorded video messages.

This would explain the same day different state events.

Here is one mention:

She even earned $100,000 for one speech even though she was not there - and gave it via satellite link. 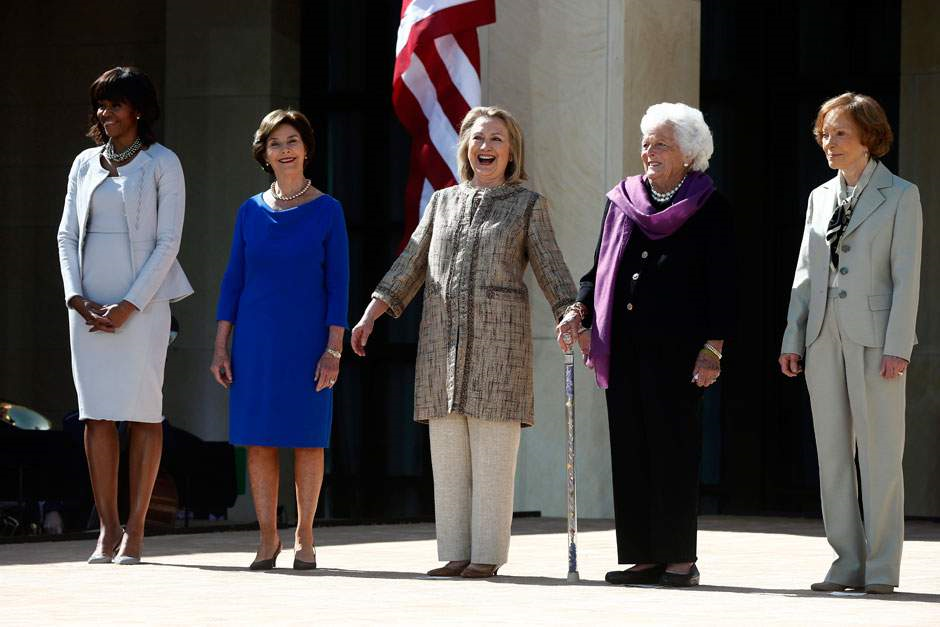 I have my doubts about the two engagements on 4/24/16, I haven't been able to find any photos or real info for the Deutsche Bank engagement on 4/24/13 but here are some things which are interesting to note:

politicalticker.blogs.cnn.com...
Former Secretary of State Hillary Clinton addressed the National Multi Housing Council. The trade association, which represents apartment owners, developers and lenders, told CNN that Clinton would address around 350 people, speaking for about an hour, with a moderated question and answer conversation.

As Clinton spoke at the event–held at a resort in Irving, a city that borders Dallas—outside the building, Clinton supporters urging her to run for the White House in 2016 held a rally. That gathering was put together by the Ready for Hillary super PAC, which held similar events at recent Clinton speeches in New York and the nation's capital.

The address is Clinton's first paid speech since stepping down as secretary of state earlier this year. Shortly after leaving the State Department, the former first lady, senator from New York, and 2008 Democratic presidential candidate, signed on with the Harry Walker Agency as her representative for speaking engagements.

While Clinton's representatives haven't given a figure on how much she's getting paid for Wednesday's address, she's considered a very highly sought speaker who could earn in the six-figure range per appearance.

Clinton's comments were closed to media. That request came from the Harry Walker Agency, but is considered standard in these types of arrangements.

Her FIRST paid speech since stepping down? What about 4/18/13 for Morgan Stanley? Regardless, it does appear she was where these speeches were held as claimed. But giving a speech to a handfull of people isn't what many think of when someone of her caliber is paid hundreds of thousands of dollars for a "speech". Hillary will never handover her transcripts, they were most likely deleted along with her many emails, at her request.

Gee, I wonder why they got the gig to represent Hillary on the speaking circuit? 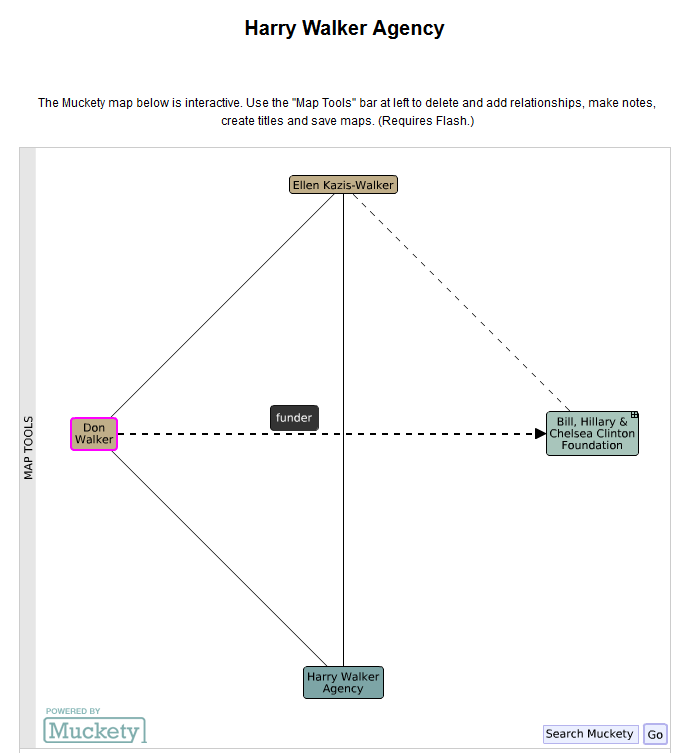 Originally, the transcripts were an issue because Hillary was making claims that she'd rein in Wall Street. She even said that she'd warned them before the foreclosure crisis (telling them to "cut it out"). Remember this?

Well, it's hard to believe that someone who was making millions of dollars from Wall Street speeches could be trusted to clamp down on them. Kind of that whole "you don't bite the hand that feeds you" thing. Just 2 of those "speeches" pays more than an entire year of the taxpayer funded presidential salary. Yet we're supposed to believe she'd take up for us instead of Wall Street? Not likely, hence why we'd want to see what she was telling them behind closed doors.

Then of course, video emerged of her putting some of the blame for the foreclosure crisis onto the buyers during a speech at the NASDAQ in 2007. Whether that position is true or not, this position was quite different from what she was campaigning on. Hence even more of a demand to see what she was actually saying to them. (Ironically, I think viewing the entire video puts things in context so it doesn't sound bad, though the part that went viral starts at the 11:55 mark.)

And of course, no one should forget Romney's leaked speech which helped sink his candidacy. Even I'm curious to see what gems can be found in those speeches, though it's probably too late now.

originally posted by: CaDreamer
my question, if there where no speeches then what was she being paid for???

Her services in her pay for corruption scam.

These companies could not just give her money for her services to them, so they papered it as money for speeches she never gave OR were prerecorded and played back.

All family pay homage to mafia bosses by offering 'donations' in return for protection and favours.

This is what I see happening here.

Clearly, Hills is a mafia boss of sorts - the level of protection afforded to her by the liberal media is unheard of and all the signs are there that she is the right person for the job.

Her career track record is a testament to this.