A new Department of Defense Inspector General’s report, released last week, has left Americans stunned at the jaw-dropping lack of accountability and oversight. The glaring report revealed the Pentagon couldn’t account for $6.5 trillion dollars worth of Army general fund transactions and data, according to a report by the Fiscal Times.

Until recently, the Pentagon has NEVER completed an audit revealing how much they spend on wars, equipment, personnel, housing, healthcare and procurements. Congress allocates the money and we've never had to show a receipt for what we purchase. This is not surprising, except when you stop to realize just how much money has been misappropriated.

Beginning in 1996 all federal agencies were mandated by law to conduct regular financial audits. However, the Pentagon has NEVER complied with that federal law. In 20 years, it has never accounted for the trillions of dollars in taxpayer funds it has spent, in part because “fudging” the numbers has become standard operating procedure at the Department of Defense, as revealed in a 2013 Reuters investigation by Scot Paltrow.


Think of how long the books have been going unchecked. Think of all the black projects, secret wars and terrorist operations that the public has funded unknowingly. Think of the military-industrial complex’s insatiable thirst for power and progress, all at a cost to the American people.

An increasingly impatient Congress has demanded that the Army achieve “audit readiness” for the first time by Sept. 30, 2017, so that lawmakers can get a better handle on military spending. But Pentagon watchdogs think that may be mission impossible, and for good reason…

The Defense Finance and Accounting Service (DFAS), the behemoth Indianapolis-based agency that provides finance and accounting services for the Pentagon’s civilian and military members, could not provide adequate documentation for $6.5 trillion worth of year-end adjustments to Army general fund transactions and data.

The DFAS has the sole responsibility for paying all DOD military and personnel, retirees and annuitants, along with Pentagon contractors and vendors. The agency is also in charge of electronic government initiatives, including within the Executive Office of the President, the Department of Energy and the Departing of Veterans Affairs.


We’re being lead to believe this was a bookkeeping error and not a complete failure of those required to perform such duties. My conspiracy side is in disbelief and has no trouble entertaining the possibility of intentional deceit. When trillions of dollars go unaccounted for, originally given to those who have proven to be untrustworthy in the past, you would be foolish to think otherwise.

The Pentagon has a chronic failure to keep track of its money – how much it has, how much it pays out and how much is wasted or stolen. Adding to the appearance of impropriety is the fact that thousands of documents that should be on file have been removed and disappeared without any reasonable explanation.


Do you understand yet? Trillions of dollars have been spent and we have nothing to show for it. Could some of that money have gone to building schools? Of course, but we’ll never know that and my trust for the government leaves me questioning their motives. The next paragraph should help put things into perspective...

DFAS “did not document or support why the Defense Departmental Reporting System . . . removed at least 16,513 of 1.3 million records during Q3 FY 2015. As a result, the data used to prepare the FY 2015 AGF third quarter and year-end financial statements were unreliable and lacked an adequate audit trail,” according to the IG’s report stated.


Obviously, it's helpful when performing an audit to actually HAVE what is required to conduct it accurately. As a result of the information missing, you get this…


Generally accepted? Give me a break! At the very least, the removal of records means that there ARE records that exist. Considering the volatile cyber-environment we currently find ourselves in, I’m hoping someone wearing the right hat is able to recover the missing information and bring justice to those responsible. This “conspiracy” against the American people is one we can all relate to and I’m sick of paying into a system that intentionally deceives me. It’s time to act.

That sure could feed alot of people.

Is funny how American tax payers do not take into account how much of their hard earned money is stolen in this nation, they just tag the loses as missing money

Sorry is stolen tax payers money, this happen in every administration, trillions of dollars lost, billions here and there, our nation is run by corruption and we are no better than any other country run by a dictatorship that usually steals from the nations coffers, we are just told all the time that we are a nation of freedoms and living in a democracy.

Meanwhile the rats in charge steals left and right.

iTruthSeeker
+6 more
posted on Aug, 8 2016 @ 10:24 AM
link
It probably went into the Clinton foundation. That is where the "seizure" video came from. They whispered into her ear where the money went and that was her reaction.

butcherguy
+1 more
posted on Aug, 8 2016 @ 10:25 AM
link
a reply to: eisegesis
I don't know why, but the thought of a 6.5 Trillion dollar robot army killing the crap out of pesky human peons entered my mind when I read the thread title.
Maybe it is a product of reading Georgia Guidestone threads?

originally posted by: butcherguy
a reply to: eisegesis
I don't know why, but the thought of a 6.5 Trillion dollar robot army killing the crap out of pesky human peons entered my mind when I read the thread title.
Maybe it is a product of reading Georgia Guidestone threads?

You never know. It does seem probable that it was spent on some type of black project, and if so, that amount of money would be some seriously advanced tech. Just being hypothetical. Or it could have been used to create isis or fund other skirmishes.
edit on 8-8-2016 by iTruthSeeker because: (no reason given)

originally posted by: GBP/JPY
last time this was announced the towers hit the ground....
like the next day....

Yep, its quite troubling... With the upcoming Wikileaks/Snowden leak, plus this missing money and all the Hillary heat, has me thinking something massive will soon happen to move the masses attention away.. I hope I'm wrong..

posted on Aug, 8 2016 @ 10:49 AM
link
This just goes to show you how crazy these people are... Who the hell needs this kind of money? We aren't talking billions missing, but trillions... So, if $6.5T is missing, I'd assume the money went to "someone" or a bunch of "someones", still, how much money do these crazy bastards need?

posted on Aug, 8 2016 @ 10:51 AM
link
One can only imagine the terrible thing's and terrible people this missing money was spent on and the damage caused..we'll never know.
edit on 8-8-2016 by vonclod because: (no reason given)

originally posted by: IAMTAT
Heres hoping it all went to building our fleet of Intergalactic Starships.

Who needs taxpayers when you can conjure up 'money' from moving around a few electrons? Don't even need paper and ink anymore.

This planet was a dry run that's been wholely mucked-up. Time to move out into the galaxy and try to do better next time.

As i understand it, defense and especially black budget spending is a free-for-all.

No accountability by design.

We're being robbed and there simply is no recourse.

Either that, or they replaced the toilets. Anybody remember the 16,000 toilet? And the 3,000 hammer?
Ridiculous.

originally posted by: iTruthSeeker
Just to put things into perspective, here is what 1 trillion dollars looks like.

posted on Aug, 8 2016 @ 11:15 AM
link
Black budget with a big dose of corruption mixed in. Bet that money bought some nice toys for the demons to play with. Bet we find out a bit more real soon... 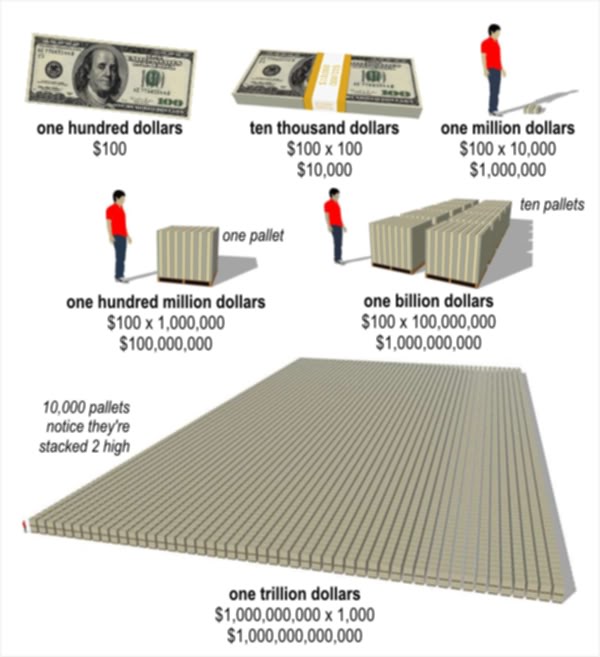 Add that to the missing funds and I'm curious as to how much in total they've spent.