Trump - The Monster behind the Mask

This is a compilation video released by Anonymous which is basically a collection of Trump saying things that should be a concern for everyone, especially if he wins the election. Most of it is all Trump speaking for himself although there are a couple parts where it's somebody discussing him.

So watch the video and we can discuss some of what's being shown here.

Let's try and discuss the information this time instead of attacking those with different opinions. For a change let's also not attack me for simply posting it either and let's avoid the same old typical incorrect labeling too such as implying I'm a Hillary shill. I don't support Hillary nor do I support Trump.

Anonymous doesn't even do anything note worthy and they can be any random person with a youtube account with an agenda hiding behind a mask. For all you know it's some DNC lackey working overtime.

if by 'monster' you mean master of marketing and business and winning arguments then yes, i think this is valid.

still gonna vote for him.

I've said it from the beginning and I'll say it again: he's going to win.

I like smart, honest people. That's my reasoning. He's so honest it gets him into trouble. I like him.

0-42
referring to people being recruited to extreme Islamic terrorism.

49-56
This was during 911 when he took a crew of people to help clean up the aftermath.

The rest I fast-forwarded to each section to make sure I haven't seen it before, nothing new found... This video is mostly out of context, cut short, ect...

Doesn't change the information that is being shown though.

Still Trump speaking for himself.

Why not address that??

Well, if you don't even watch the entire thing then I get to say "screw it" to your comments as well.

Proven beyond any doubt when you said the following:
"Everything Trump says is Gospel for me."

But of course this isn't getting us anywhere in discussing what's on the video now is it??? Why not try and address that information???
edit on 8.8.2016 by Kandinsky because: No vulgarities


Ohhh ouch man my bad. I was j/k . Your melting my snowflake

I approve of anything he has said in his videos. This message was approved by me.
edit on 8.8.2016 by Kandinsky because: (no reason given)

I thought you wanted to call each other names and stuff.

If you were only joking you should have said something.

I said at the start I wanted to avoid such things but you seemed to want to go there.

I aim to please. Always give the customer what they want ya know.

posted on Aug, 8 2016 @ 01:43 AM
link
Ok as someone who is committed to vote for neither Hillary or Trump I do have to step up and point out something.

That video twists the truth of what Trump has said in the Exact same way the Media Attempted to do it during the RNC primaries. They Take one Line or Half a line and take it out of context from the whole speech. Already this whole election season I have seen many of Trump's Speeches that has happened to.

I am willing to BET if you honestly look for the full speeches where those clips of Trump were taken out of you will find the Emphasis and Meaning of what was said comes out in a Totally different Context.

As for now I see that as the Puppet Anon, that is part of the Beast to begin with and not to help.

Please do Note I am making a Statement on the FUD in the Video and I am not in anyway intending this as an attack on the views and opinions of the OP.

And again I support neither of the Mainstream candidates give me a real joker in the white house, Ron White. 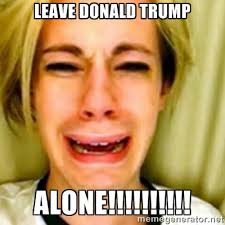 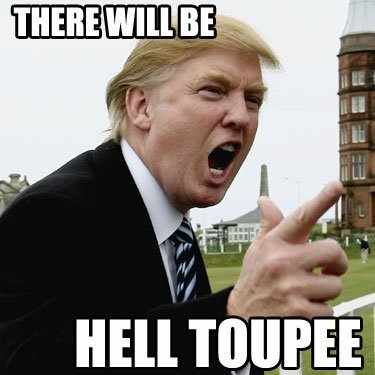 This is a compilation video released by Anonymous which is basically a collection of Trump saying things that should be a concern for everyone, especially if he wins the election.


I could take clips of ANYONE and use one or two sentences from a speech, and make them sound like a terrible person.

It's called taking words out of context, or using words without meaning. The media has done it repeatedly to Donald Trump, and that's all this video is.

what a suprise all the trumpbots jumped in so quick to call you names.

Actually so far, i don't think anyone has called him a name yet. I said "YOU SUCK" , but I was just goofin off. And then he made me cry.

But I see OP did in fact jump to names from the get go, and yet we merely came in and showed support for our candidate, well except me, I threw mud.

posted on Aug, 8 2016 @ 02:45 AM
link
Some is taken out of context
. The first one " shut down the Internet" meant ISIS uses social media to recruit terrorists, or they communicate via SM

Mexicans bring in the drugs? Yes they do. Crime is up, violence is up, all sorts of issues related to drug addictions. Some are ok but the majority are thugs , like he says, except we can't say that anymore . Boo hoo. Except he did say it.

I am an immigrant (not Latino) , I had to do it legally, doctors exams, vaccinations, proof of identity, passports. My father had to show he'd been promised employment here. They should have to do it properly as well.

Some other things I agree with , but not gonna debate them with you. I didn't finish it, obvious it was just the same stuff we've seen a thousand times. It doesn't change opinions on him, if that's what you hoped.

Mask? What mask? He hasn't hidden anything he has said. He said all this in public. Not much of a secret . He's only a monster to brainwashed people who've been trained to keep their mouths shut, thoughts to themselves