Trump did something unusal today 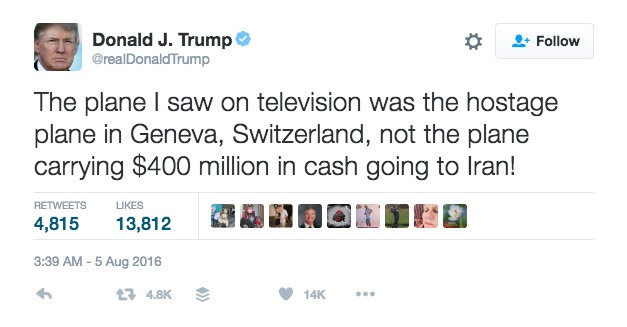 He kinda admitted he was wrong!

Trump spokeswoman Hope Hicks told the Washington Post on Thursday that the video was of the prisoners being released and not of the money. But hours later, Trump repeated his claim about the video at a rally in Portland, Maine.

The Republican nominee has rarely acknowledged gaffes in the past, although he did express regret earlier this year over retweeting an unflattering image of Ted Cruz's wife amid a heated primary season as well as his answer to a hypothetical question about whether women who get abortions should be punished if the practice were to be made illegal.

Later Friday morning, Trump campaign chairman Paul Manafort denied that there was any mix-up in regards to the nonexistent footage, but quickly shifted gears to another of Trump's recent talking points: that the cash delivered by the U.S. likely wound up either funding terrorism or found its way into "some of the mullahs' bank accounts."

Unfortunately hours later, Trump repeated his claim about the video at a Rally..One step forward, two steps back.
edit on 5-8-2016 by TheAmazingYeti because: fixed link

AboveTopSecret.com takes pride in making every post count.
Please do not create minimal posts to start your new thread.
If you feel inclined to make the board aware of news, current events,
or important information from other sites
please post one or two paragraphs,
a link to the entire story,
AND your opinion, twist or take on the news item,
as a means to inspire discussion or collaborative research on your subject.
edit on Fri Aug 5 2016 by DontTreadOnMe because: MPORTANT: New (old) Standards Are Being Enforced (again) For New Threads

posted on Aug, 5 2016 @ 11:08 AM
link
Nonexistent Iran video? Do people here have a short memory or what? It wasn't that long ago when Iran released the documentary clip.

Well its not about Trump right or wrong....just Trump wrong.

Oh, right. Well what flabbergasted me was the media's attempt to censor the whole Iran video whole this time. I even remember BBC reporting about it after video's release. When do they learn you can't bash someone with lies without getting your own teeth kicked in. Shame on you CNN, WaPo and others.

posted on Aug, 5 2016 @ 12:16 PM
link
This is fun to see how people defend this. He claimed twice in a week he saw the video. Now he says oops I was wrong. Meanwhile everyone gets in a fervor over a video that doesnt exist.

posted on Aug, 5 2016 @ 01:50 PM
link
Shoot one of the hostages was told by his iranian captors that they could not leave until the plane landed and was offloaded so they could count the money.

originally posted by: bknapple32
This is fun to see how people defend this. He claimed twice in a week he saw the video. Now he says oops I was wrong. Meanwhile everyone gets in a fervor over a video that doesnt exist.

Which is why im voting for him.

posted on Aug, 5 2016 @ 02:36 PM
link
Pretty shameful that Iran needs to take American soldiers hostage in order to get the Americans to give them what belongs to them in the first place.

So Trump making a mistake about a video he saw on Fox is worse than the act of giving a ransom of cash to Iran?

posted on Aug, 5 2016 @ 02:53 PM
link
Sure he saw the video, but he was under sniper fire at the time and the video was not classified until after it left his possession!!!

posted on Aug, 5 2016 @ 02:56 PM
link
Does the media not remember everything is being documented now?
I mean EVERYTHING!
Trumps tweets have made the MSM dig in their archives multiple times looking to discredit him only to find out he was right.
First about dancing Muslims on 9/11 and now this.
There were a few others I believe as well.

Hard truths people...
Learn to accept them.
The world isn't always so cut and dry and black and white. You must have a very broad perspective to see things for as they really are in this day and age. Trump has proven that by literally predicting terrorist attacks and sticking to his guns in the face of major adversity from both sides of the aisle only to be proven right once all information is assimilated.
*Cough*
Kahn
*Cough*

Granted he has wavered a few times but in the end was proven in the right. I suspect even he underestimated the power of suggestion and propaganda our MSM wields. Always laugh when the left calls Trump out for changing his stance on things after becoming more educated on the subject. I would personally like a president that was willing to change opinions rather than running on the platform of years of experience but not much to show for it... Clearly that method isn't working if you look around.

My opinion is that he is scaring the crap out of them because he is going to screw up foreign policy machinations, return more power back to states and really try to do some things to help "we the people".

I wouldn't put it past them to be considering the JFK solution.

posted on Aug, 5 2016 @ 10:22 PM
link
WHY did Donald Trump suddenly change his mind to say that he saw the wrong video? Could it be because it was shown as part of his "security briefing" this morning?

Maybe it was later today, but the video showing pallets of money for Iran, eventually arrived on YouTube.

I sent it to their campaign managers e mail. I hate Lies and said heres a freebie. next time i expect to get paid.