Do Pilots Prefer the F-35A in Dogfights?

I thought this article was very interesting. I'm certain that several aspects of this article will be extremely controversial - especially as it is an advocate of concurrency! Frankly, I agree. I don't think this was cause of much issue on the JSF program. I also find the commentary on the F-35 program leadership completely spot-on.

A Direct Comparison. Thirty-one experienced pilots currently flying the F-35A were asked to rate the energy and maneuvering characteristics of their previous fourth-generation fighters in a combat configuration throughout the dogfighting maneuver envelope in a combat configuration[23] after jettisoning their external stores. They were then asked to rate the performance of the F-35A using the same scale, with fuel and internal munition loads associated with a combat loadout[24] under their current G and CLAW restrictions.[25] The F-35A compared well to the four other fighters (F-15C, F-15E, F-16C, and A-10) in most every regime. (For the total results and responses from the pilots of each respective fighter, see Chart 1.)

Each pilot was then asked to select which fighter he would rather fly in combat if he were to face a clone flying the other jet in six different air-to-air situations. (See Chart 2.) If the pilot selected an F-15C in a short-range setup, for example, he felt he could outperform a pilot of equal abilities in the F-35A. Pilots selected the F-35A 100 percent of the time in beyond-visual-range situations and over 80 percent of dogfighting situations where energy and maneuverability are critical to success.

—John Venable, a former F-16C pilot with 3,000 hours of fighter time, is Senior Research Fellow for Defense Policy in the Center for National Defense, of the Kathryn and Shelby Cullom Davis Institute for National Security and Foreign Policy, at The Heritage Foundation.

[24] Combat configuration for the F-35A: 13,000 pounds of fuel to replicate retaining internal munitions and roughly half internal fuel. The F-35A will have no external stores during any anti-access, high-threat environment.

What I find interesting is pilots prefer thr f 15 for perch position. But in a way it makes sense I bet it's much easier to get an f15 into a dive and get a line on an attacker.

originally posted by: crazyewok
From my understanding its not designed for dog fighting.

Really no plane is designed for a dog fight. If all goes well it doesn't happen. However they learned that at times any aircraft can end up in a dog fight so turn and gs become important. Pilots are taught how to use momentum to get a sight on thr enemy. To much power you over shoot to little he pulls away.

posted on Aug, 5 2016 @ 05:15 AM
link
I'm wondering if former F-35 pilots now flying legacy fighters would say the same thing as those interviewed. Of course, since the F-35A is so new I'm not sure if these pilots even exist!

posted on Aug, 5 2016 @ 06:11 AM
link
hmm okay I get it that the F-35 is better to fly than the A-10 but does it really outperform the A-10 in fighting capabilities? I mean the A-10 was built and outfitted for a specific purpose (ground attack capabilities against numerous soviet tanks) how can the F-35 compete with that?
Someone care to explain I'm really baffled that the F-35 should be the sucessor to the A-10.

All the hype around the F-35 is propaganda designed to justify the program.

Develop the technology and the airplane, then shelf it. We don't need the F-35. (yet). Most conflicts right now are being fought with sticks and rocks grade technology on the opponent's side. The technology of the F-15, F-16 and F-18 along with the rest of the US arsenal are way more than adequate to address these threats. The airframes are known, the parts are there and they're cheap to operate in comparison.

We don't need this bloated program.

No Harrier pilots surveyed ? Would be interesting to see if they prefer the Harrier or the F35, seems strange they include the Warthog but don't include Harrier

I'd also like to see being a brit, whether the Eurofighter and Tornado pilots prefer flying the F35

No, no one can explain it...because it's a completely misguided comparison; they serve two completely different mission profiles.

It's a perfect example of the 'propaganda' I was referring to in my previous.

If the US military EVER has the notion of putting an airplane with a staggering $337 million dollar price tag down into the soup of AAA in a ground support role they need their collective head's examined!!!

The entire article was completely centered around the US Air Force and the aircraft that the F-35A is supposed to replace. Unfortunately that means no Harrier, Hornet, or Super Hornet pilots were surveyed. I wonder if this was because this was all the author had access to, if the scope would become too large, or maybe it would reveal something the author didn't want.

A Royal Norwegian Air Force pilot described the F-35A as flying like a F/A-18 except with a turbo fitted. That explains why the sustained turn is inferior to the F-16 (which is generally known for excellent sustained turn) yet "ability to recover airspeed" and low speed performance is superior.

The LRIP-8 contract lowered the average price of each aircraft by 3.5% from the LRIP-7 award, and 57% from the first batch.

It's dishonest of the author of the source you linked and dare I say propaganda, to use the early cost of Low Rate Initial Production (LRIP) F-35 to state that is how much an F-35 will cost. LRIP is for initial aircraft, while the manufacturing line and aircraft are refined and go through a learning curve.

The following chart shows the cost projections from the past five USAF budget requests, along with a calculated curve that corresponds to industry best practice ‘learning effects‘. The FY 2017 figures clearly show a planning assumption of a flatter cost-versus-time curve than in the past, including a per aircraft increase of around US$7 million in the 2020 purchases compared to last year’s figure. 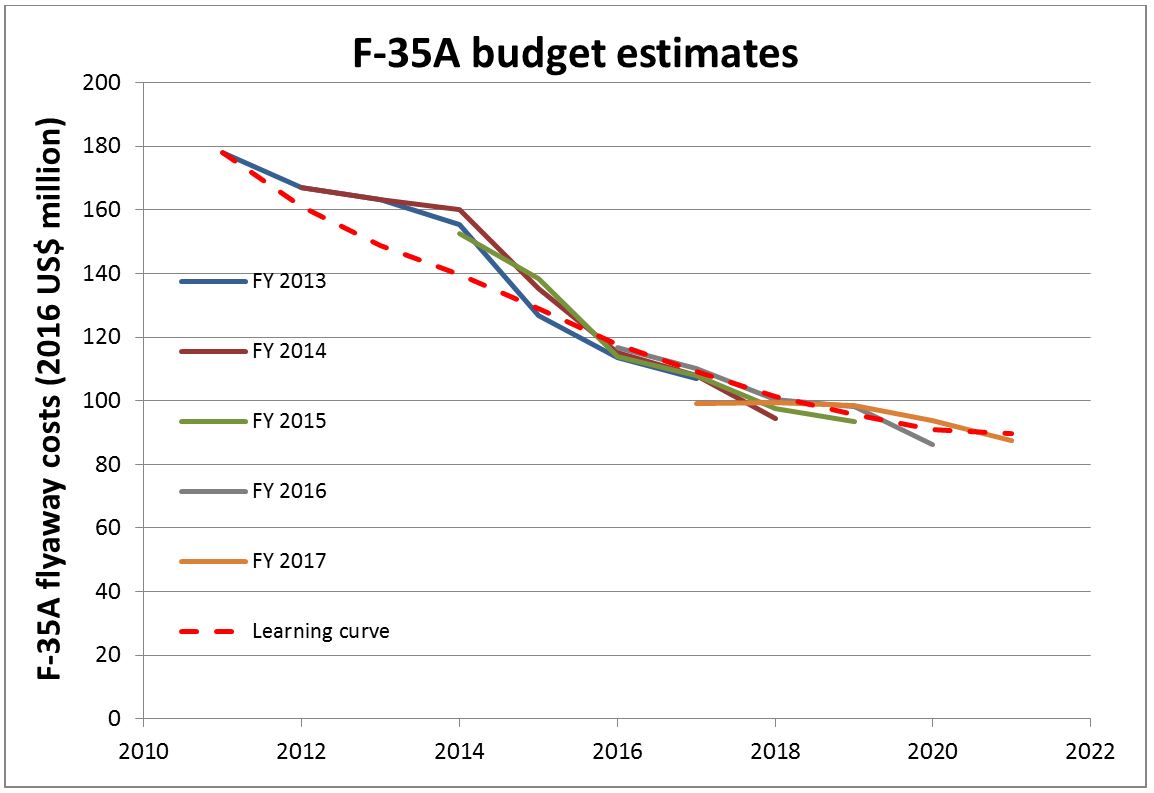 Why do we need this airplane?

What specific threat, current or future, is it required for to address...that the F-15, F-16 and F-18 cannot already address?

The best money is spent on target acquisition and stand-off weapons systems, not stealth and ultra-performance. Face it, aircraft performance technology has already eclipsed the human body's ability to deal with it. You can already turn modern aircraft faster than a human can take.

With the exception of the B-2 (which is not a subject of this discussion), stealth technology in fighter/bomber aircraft has already proven to be a misguided effort. Look at the F-117. Lose one plane and you lose the whole program...what a colossal waste (thanks, Bill). So, when you lose one F-35 what's to say the same won't hold true? Lose a F-15, 16 or 18 and aside from the pilot himself you don't suffer a staggering strategic loss.

We do not need the F-35, certainly not in production anyway.

Okay, let's use your numbers...

Parts are already sourced and in production. Crews are highly trained. Pilots are capable of addressing any threat in the sky...with these already tried and proven platforms.

The F-15, F-16 and the F-18 can all shoot down an F-35. Because it's the missile and the radar, not the aircraft, which takes the plane out of the fight. They're not going to dogfight with it (just like nothing else ever will), they're going to hit it from 20 miles out. Probably might not even see it visually.

posted on Aug, 5 2016 @ 08:29 AM
link
The criticism of the F35 is a good discussion, but the basis must be aligned to basic aircraft lifespan, survivability and flexibility.

Do we need dogfighting? Yes, it's a preventative measure if anything. When I was in Operation Southern Watch, we would occasionally paint Iraqi aircraft around Baghdad, north of the DMZ. When we painted them, they almost always turned away. The mere threat of facing US fighters turned them away. Take away the ability to fight, it takes away the threat.

Regarding using a stealth aircraft in CAS/low altitude environments. That fight has been fought for years. F-16s have supported low altitude operations. No defensive armament, single engine. When given the choice, I'd rather have some radar stealthiness along with my low altitude mission. It just makes it harder for anyone to shoot me down.

Do I love the F35? No. It's merely an average, disposable aircraft like the A-4. But it will do better than old F-15s with cracked airframes and underpowered old motors. It's better than an A-10 that maxes out at 300 knots in most cases. I think it will prove itself in the next decade or so and should a North Korea or Libya ever decide to push themselves as a nation, we have the air power to push that back.

Our legacy fleet is currently falling out of the sky, literally. VMFA-232 lost two Bugs in three days last week, to make three aircraft and two pilots in less than a year.

Yeah, just read about that. That squadron must really be hurting. No day is routine in that business.

No argument with anything you say. However, we as a country, have to start looking at things in terms of cost-benefit. Money doesn't grow on trees (contrary to what our government may believe).

It may sound callous, but it's not; it's reality. Yes, the value of a human life is immeasurable, no argument. But when the cost of a weapon system becomes so great and only yields a fraction of a percent increase in the preservation of life we need to be asking questions. This is the case with the F-35.

$100 million dollars represents a stack of $1 bills which is 6.21 MILES high which is the operational altitude of the F-35.

posted on Aug, 5 2016 @ 08:50 AM
link
BTW...I am not at all suggesting patching up old aircraft to keep them flying. This is the military's way of forcing their hand (see edit below)...and it's wrong! Old aircraft should be replaced with new.

Nor am I suggesting not developing technology like the F-35. Develop it, test it and shelf it.

What I am suggesting is replacing aging aircraft like-and-kind. Benefit from the economy of scale and depth of institutional knowledge with highly trained crews and pilots on these proven platforms. Don't roll out something new, at such great expense, and start the learning curve all over again for only a very marginal gain.

ETA...More correctly I should say..."this is the crooked politician's/bureaucrat's in DC way of getting their pet projects put into production."