Question concerning a comet or meteor that passed by?

posted on Aug, 5 2016 @ 01:30 AM
link
Back 95,96, I was driving and happend to look up and, forgive me for not knowing what ya call it specially lol, saw a slow moving 'rock' passing high in the sky. All you could really see actually was the boiling fire burning behind whatever it was. I parked and watched it slowly pass right to left high up, I'd say took a good five or 10 for it to slowly vanish off in the horizon

My question is, could it of came from space, started burning then just went out again and if so might it come back with different results? Like lower? Lol was daytime, early evening
edit on 5-8-2016 by tayton because: (no reason given)

posted on Aug, 5 2016 @ 01:44 AM
link
It was during one of these rare or so times we have meteor showers so assumed it was part of that, definitely burned steady thoughout, was pretty high, hmm, dunno then

originally posted by: tayton
a reply to: Soloprotocol


When you said you were driving i assumed it was a Car and not a Horse and Buggy.

Hiya Tayton. You're wondering if it came in on one side of the atmosphere and popped out the other side? That makes you ask if it'd come back around and possibly be watchable again?

When a meteor or, fireball, enters our atmosphere, it's a goner whose time cruising the heavens is over.

The fire you saw was caused by the object burning up in the atmosphere. Most of the time they burn so bright and so hot that they disintegrate before touching the Earth.

You're a lucky person; not many people get to see something like that so clearly. You'd be double-lucky if it'd hit the ground and you'd found it. Some of those things can be very valuable.

originally posted by: tayton
It took 5 or 10 mins, sorry


Are you sure it was minutes and not seconds? "Space rocks" or even man-made rocket stages burning up in the atmosphere don't last that long. If it really was 5 to 10 minutes, my money's on a rocket in low-earth orbit (or just below it), venting some fuel or something.

Since this was daylight (early evening) sighting, then maybe it was the contrail of a plane being lit with the red-orange light of sunset, and that red-orange contrail was what you described as "the boiling fire burning behind whatever it was", something like these pictures: 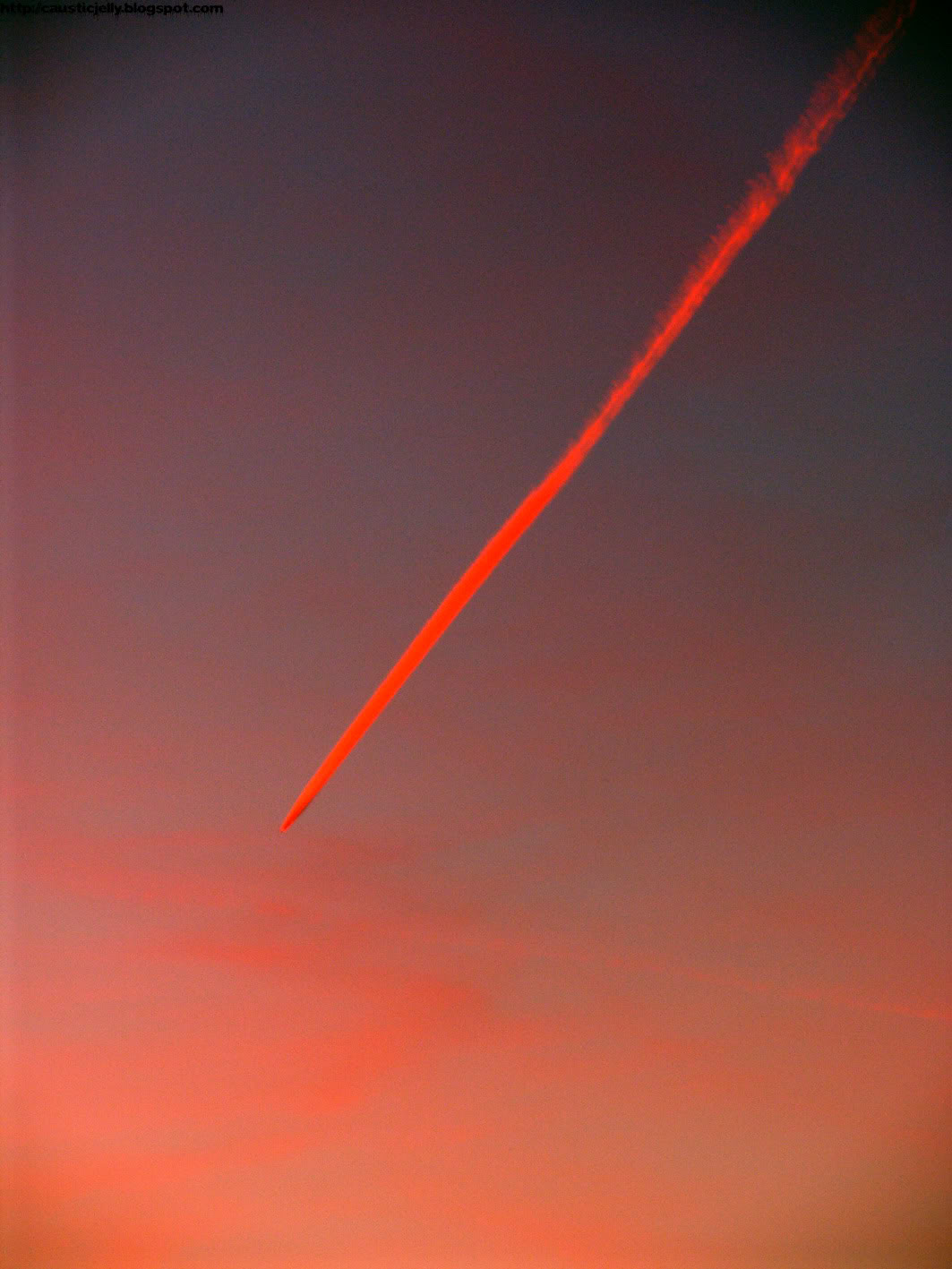 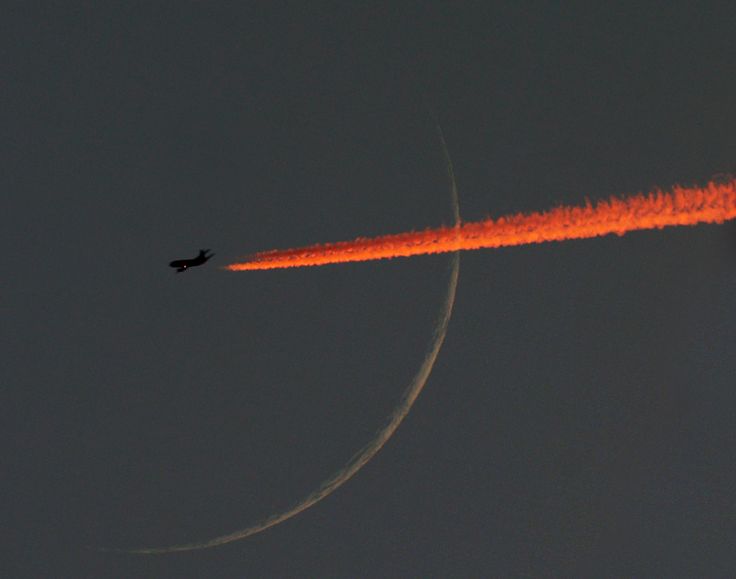 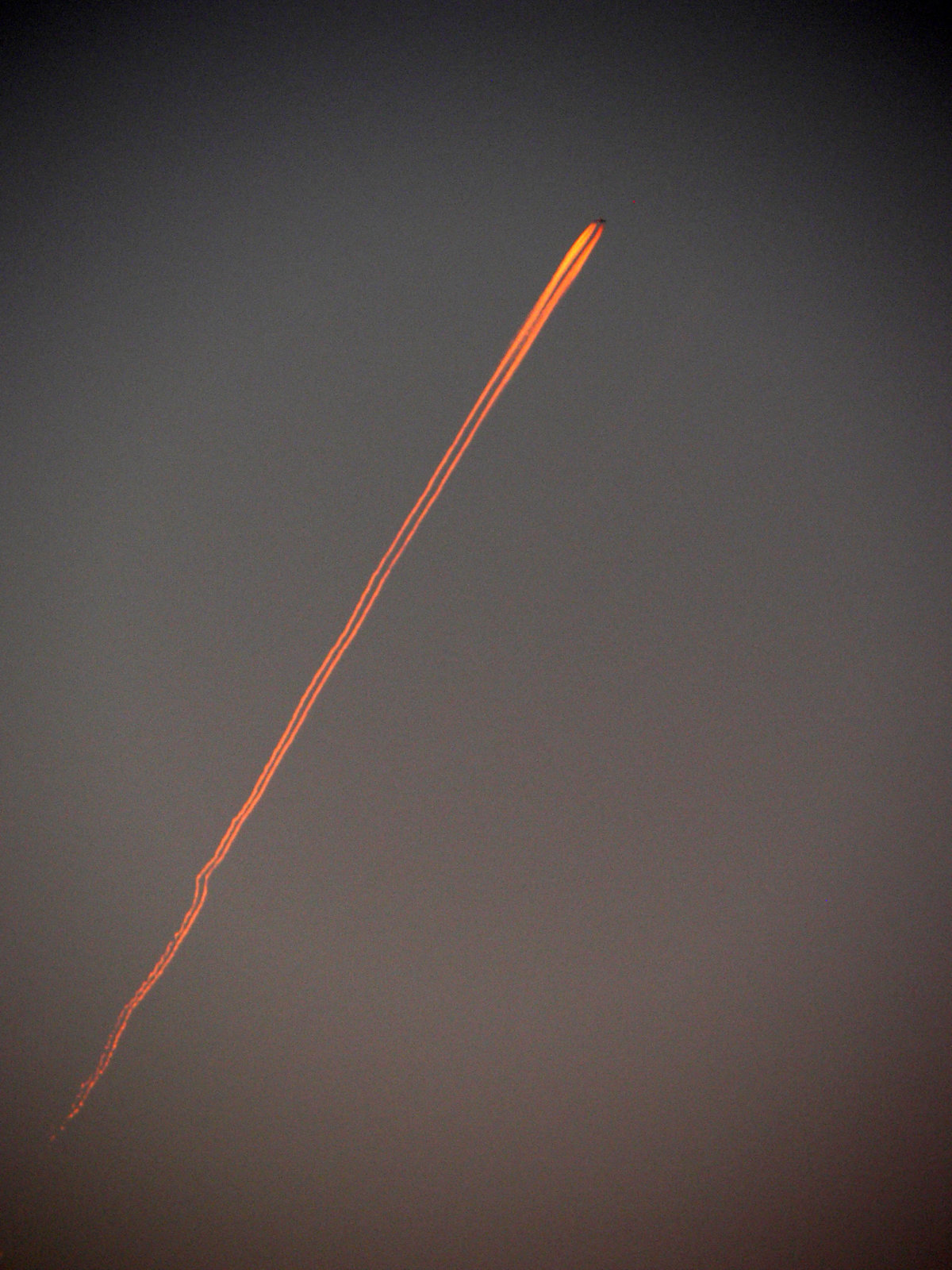 Thanks foe the posts. No, no big contrail, I would swear not man made, is everyone saying that this could NOT HAVE BEEN a big rock that came in like almost even with the ground, well from my perspective, high, and entered and left orbit, burning throughout its travels? Man I would have bet money on it

posted on Aug, 5 2016 @ 09:22 AM
link
a reply to: tayton
People here have a pretty good grasp on how space stuff works, so it's definite that a space rock couldn't have entered the atmosphere, slowly traversed it while burning up, and exited out of the atmosphere again. Atmospheric reentry is a very violent event, ending up in explosions and stuff falling to earth if it ever makes it in one (or more) peices. Space rock events last just a few seconds, a minute at most if it's a big one. Man-made rocket stages reentering the atmosphere travel slower, so they burn across the sky for a bit longer, but still not for 5 - 10 minutes.

Everytime I see a movie with fireballs this event comes to mind. Strange, barely any contrail, mostly flame boiling across the sky slowly, then gone in the distance, wasn't a young guy, back of my mind hoped it never came back and nailed us one day. But , ok. You say it's nothing. Thanks!

originally posted by: tayton
a reply to: Soylent Green Is People

Thanks foe the posts. No, no big contrail, I would swear not man made, is everyone saying that this could NOT HAVE BEEN a big rock that came in like almost even with the ground, well from my perspective, high, and entered and left orbit, burning throughout its travels? Man I would have bet money on it

The trouble is that there is no way whatsoever a space rock of any kind would take that long. Impossible. So it must have been man made

posted on Aug, 5 2016 @ 10:39 AM
link
What you describe sounds a lot like an object in Earth orbit re-entering the atmosphere. These move slowly enough to stay visible for several minutes,and put on quite a show. Here is the video of a rocket booster re-entering just last week:

posted on Aug, 5 2016 @ 10:45 AM
link
Of course, it could've been the Blob. I'd stay watchful for any gelatine-like mass getting anywhere near you. 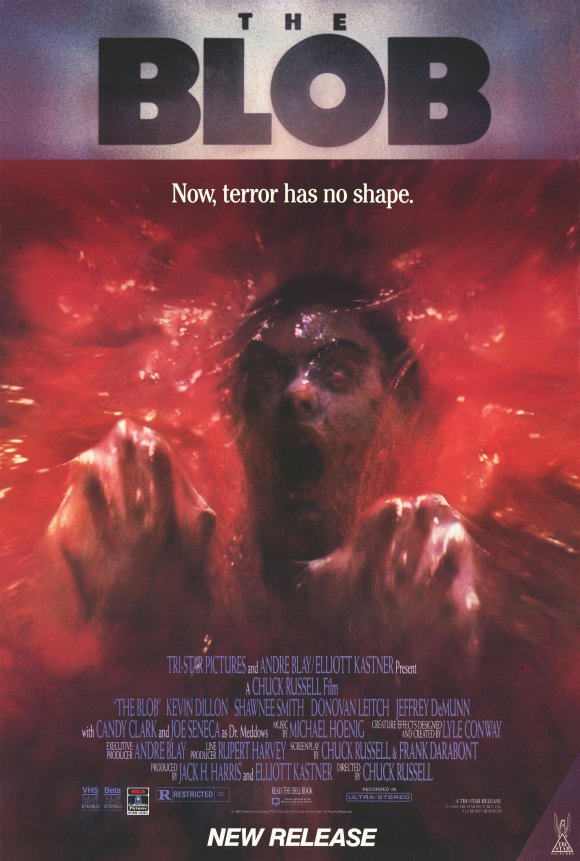 What about this thing that came down in Russia, could it not have been similar but perhaps have burned to nothing eventually off in the distance perhaps? I mean you can sit and watch plane leaving contrail for quite a while that's high up, just thinking

originally posted by: tayton
What about this thing that came down in Russia, could it not have been similar but perhaps have burned to nothing eventually off in the distance perhaps? I mean you can sit and watch plane leaving contrail for quite a while that's high up, just thinking

It all comes down to how long it took to cross the sky.
A natural meteor of any size - from dust grain to dinosaur-killer - with rare exceptions hits the atmosphere at better than 20 kilometers per second. It either burns-up, hits the ground or skips off in just a few seconds - less than a second for the smaller ones.

Satellites and re-entering satellite debris can be visible for several minutes - occasionally more than 10. Airplanes leaving contrails can also be visible for that long (they are much slower, but also much lower). Of course, you need sunlight to see contrails, but meteors are best seen at night.

So the questions you need to consider are:
1. What time of day did you see the object (day, twilight or full dark)?
B. How long did you observe it (seconds or minutes)?
III. Was what you saw a single bright object with a cloudy tail or several bright objects travelling together (perhaps spreading as they crossed the sky)?

Afterthought: One more question - Where were you in the world wen you saw this? The southern or western part of the United States, perhaps, or in Mexico or Central America?

Thanks Exupery, none of the above, in Canada, outside Gananoque ontario, close to American border, would say it heading roughly North south, from my perspective a ball of flame burning steady leaving slight smoke trail, close to evening but still quite sunny out, definately watch 5 mins at least as it went out of site