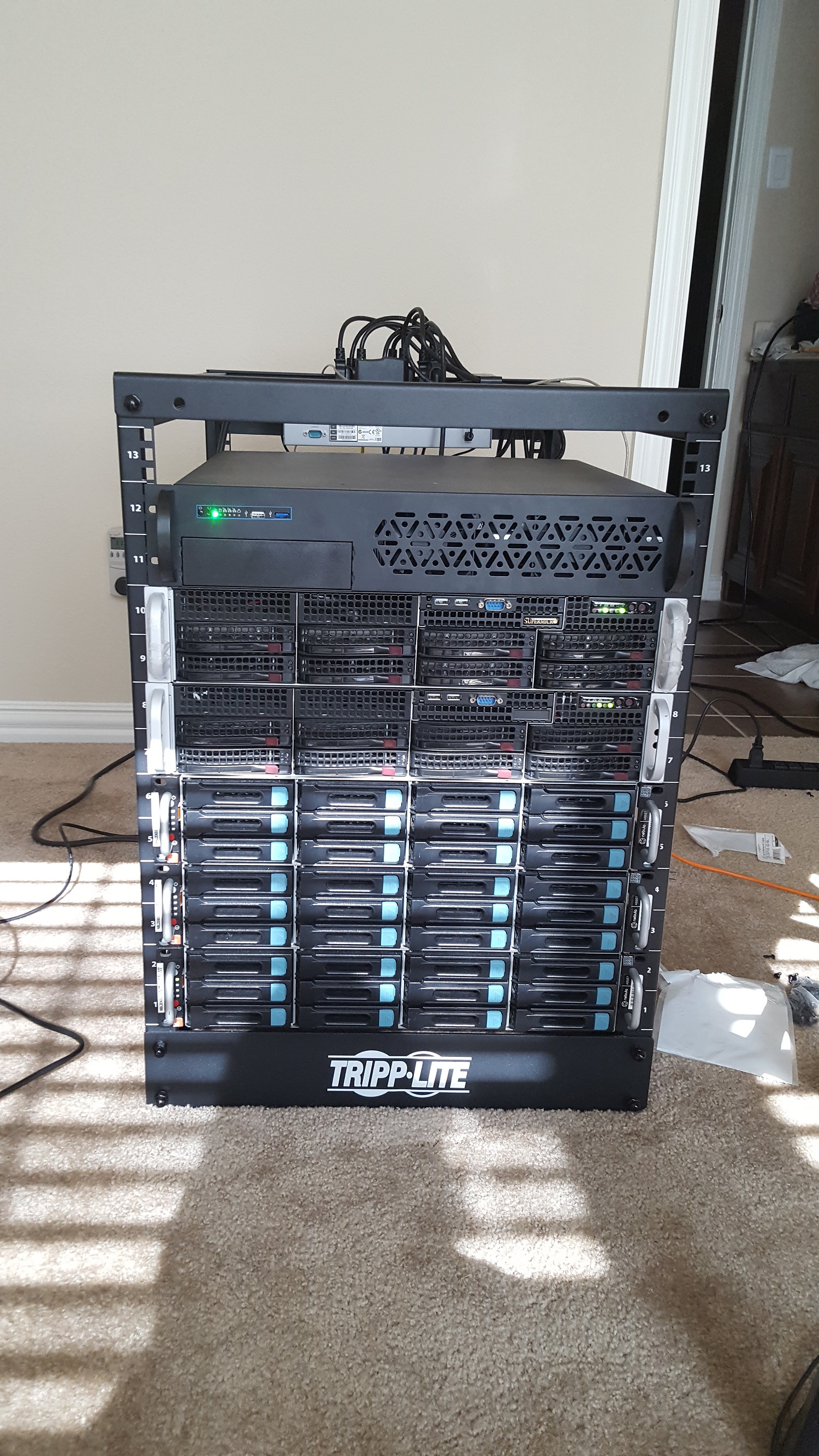 She's being used for a new project. I hooked up with an artist and we're doing a couple of things.

We're working on 1 for now, 2 will come after we get some stable income going. He works at an architectural firm as a squire, never got the degree so has probably capped out. Been at it for 10 years, longer as a 3D artist, and he knows what our clients are after.

So the black box at the top that's for a VPN. We tested out remote rendering without it works fine, except it's an open service anyone can sniff the open port and figure out what's going on. I got it rockin a linux distro, firewalled, and the only open ports (ssh and vpn services) require keys to get in.

Guy kicks back with a brew after work, taps into the VPN, and starts creating stuff. It's pretty cool!

posted on Aug, 5 2016 @ 02:47 PM
link
Wow! I'm jealous 650 cores - you literally have your own supercomputer. From the video it looks like one frame takes 15 second to render. With Blender on a laptop, using global illumination take 6 hours to render a single frame.

Oh that was you! I U2U a mod wondering if they were the member I was thinking of who was into 3D design. If you're interested I'd be willing to give you access to test things out with your apps. You can u2u me.

posted on Aug, 6 2016 @ 07:26 PM
link
OpenVPN is fun I figured out how to remote wake on lan the farm when a user connects to VPN, and remote execute from a linux shell to win 10 rigs to sleep after the artist disconnects.

So the system uses just a drip of power until need be active. The VPN is on a braswell atom quad core rig, using 6w of juice at load (soc only). I'm gonna get the scripts up and test the load in idle mode, thinking it'll be well under 100w it just needs to keep the memory, chipset, and nic live.

So tonite we're doing the first walk-through of a high-detail nail spa salon. I know several owners/GCs for the nail spa in our metro area, so we're building up the model assets and making a portfolio for it. The chairs we modeled are too complex! Look great, but it takes the farm about 45 seconds per frame, so at 24fps and 5 seconds duration it should take the farm roughly 2 hrs to complete from the moment we hit the render button.

That's another edge we're offering, a large .jpg, a 13x19 print, and a 5-10 second walk-through video. The video isn't usually included, and especially not at our price. Each GC of these nail spas has their own style, interior design ... so after we build up the modeling assets it'll not take too long to complete newer renderings. Just manipulate the exterior, and arrange the assets, then wait for the farm to complete, print and deliver. 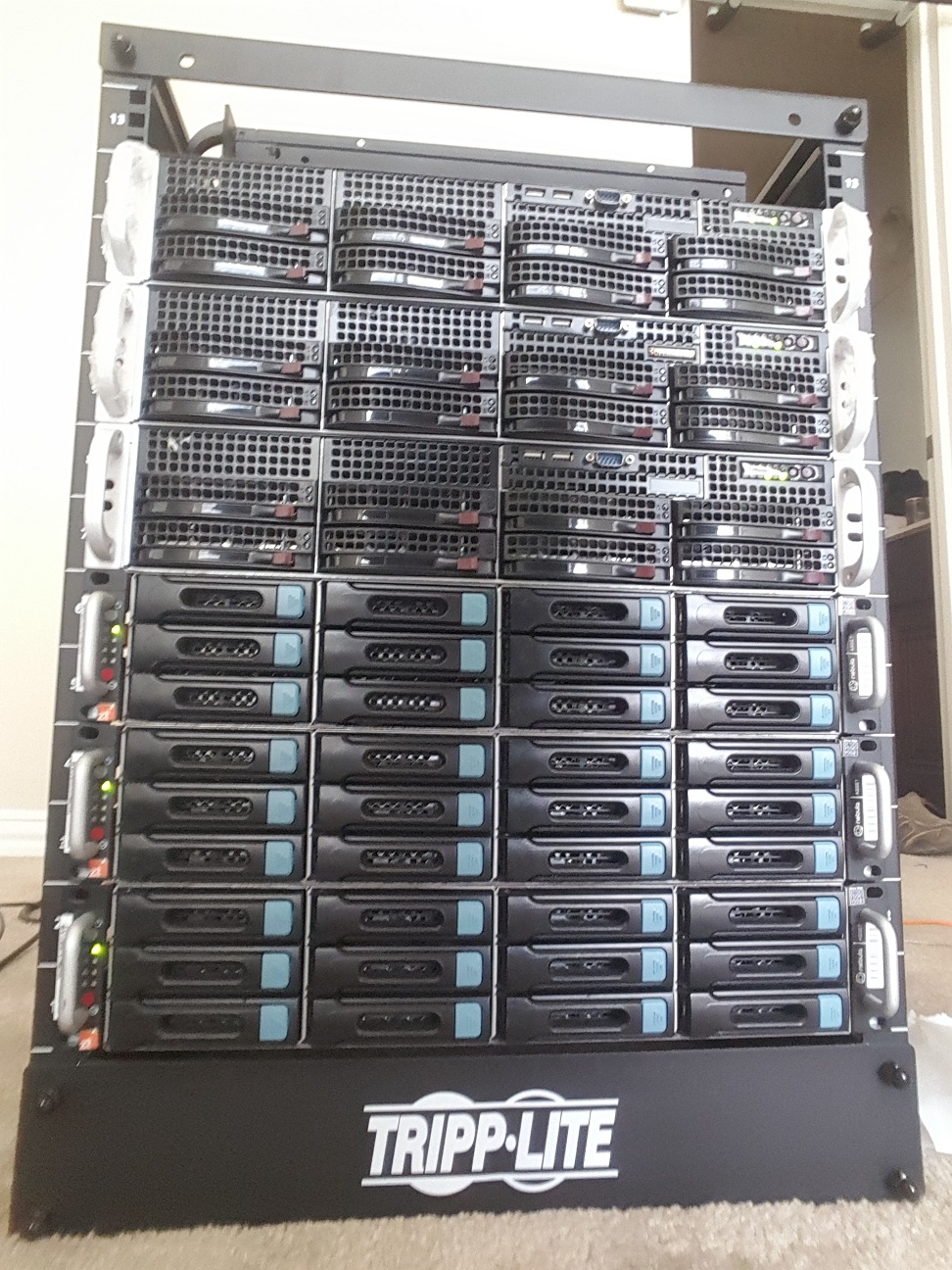 Ah this is just the beginning. My partner and I are just kicking this off, then will be hiring out and making sure it grows well. I'm not designed to stick with any one project for too long, I will approach perfection, then keep tweaking it and screw things up in the process. So I learned a long while ago to always have more than one project going on at once, and to let older ones go when they are more than good enough.

This was a last minute idea when I bought most of this gear for another project that fell through. Actually seems to be working out well, but for sure this time next year my focus will be more on home-building. I'd like to have at least 2-3 projects for profit and fun along with home-building singles by next Summer. So I'll obsess over this one for maybe a few more months, then start to detach.
edit on 9-8-2016 by pl3bscheese because: (no reason given)

posted on Aug, 12 2016 @ 05:00 PM
link
Well we landed our first couple of gigs and came up with a business plan. I sold two of the older servers on ebay and am about to get a new one. Basically swapping out two dual socket 32 core sandybridges for a quad node, dual socket 128 core total sandybridge. It means we grow to 384 cores, and get to say we're operating with over 1Thz of xeon power.

I do like the sound of that 1Thz, but in reality I wanted to be able to do a full walk-through at 24fps with high detail/quality and have it render out overnite. We get that now. It's gonna get us by for our first year, and then we'll assess if we're going to adapt GPU-driven processing power or what. This is good enough to sign-on, and knock out a new client a day. Not sure I even want to grow more than that with this project, I like to keep my gigs fairly small and real.

This the new server:

It's less power-efficient, but I weighed in the price to performance ratio, and realized it was well worth it to add one of these for now. We double up our power load, while adding about 60% performance, all for less than 10% of the total system cost.
edit on 12-8-2016 by pl3bscheese because: (no reason given)

posted on Aug, 23 2016 @ 11:25 PM
link
Server comes in Thursday or Friday it's stateside right now. I had a genius idea earlier today. Want to keep it to myself until I see it realized. I hired a freelancer to scrape all registered architects in state and nationwide, cross reference name and address with Google search to extract email, auto mail a clean, personalized msg linking to site and portfolio. We're mailing the rest. How I aim to mail is where the brilliance comes in, but I must keep this private it needs to ripen inside.

Updates in a few weeks after site is complete, I get the wide printer and set this into action. We're gonna be so swamped with clients.

posted on Aug, 25 2016 @ 10:06 PM
link
New server is finally setup OMG~! that took forever, not gonna get into details but that was a mess. It's drawing ~1400w all to itself, more than doubled my rendering workload! Well worth the investment. I have to spend time tomorrow with zipties doing cable management else will be smelling burning plastic soon lol

It's time to move everything not server out of this room, move my office upstairs, it's like a freaking jet in here now!

posted on Aug, 27 2016 @ 10:37 PM
link
Picked up a Canon pro-100 half off msrp locally. Set up webcams pointing to front and back of servers. Artist and I can view over the net and I am notified if motion breaches sensitivity range via email. He can tap into vpn, print out image and view it's success in tray real time.

I installed two UPS devices. Upstairs my monitor, laptop, sound system and gateway stay operational. In server room vpn box, 3ds manager box, and switch stay lit. In garage ATT battery keeps ONT going. Manager is set 30 second intervals to reconnect 60 cycles. If power goes out I keep to mindless entertainment, and a render keeps in queue until power restoration after which nodes wake back and reconnect to continue rendering scene.
edit on 27-8-2016 by pl3bscheese because: (no reason given)


Better explanation of setup. Tweaked the cooling as well. 95F in bathroom 80F in bedroom 3hrs in a render.
edit on 29-8-2016 by pl3bscheese because: (no reason given) 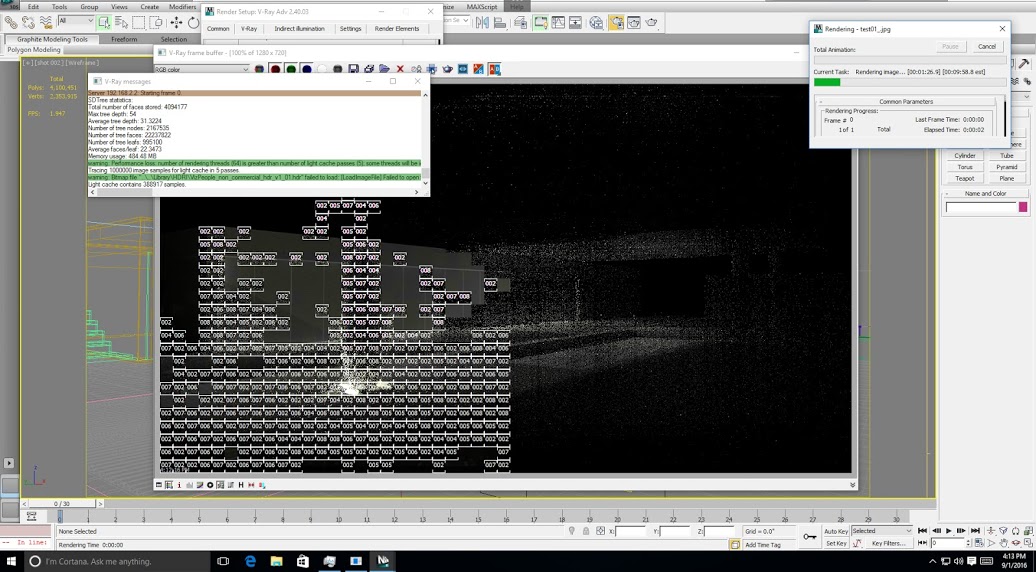