Is This The Real Palace Of King Arthur ?

posted on Aug, 4 2016 @ 08:15 AM
link
King Arthur and the Knight's of the round table. Some would say just a mythological fairy tale... Either way it made for some knights in shinny armor stories that entertained me as a young person. The archeological dig begins in Tintagel where the story said Arthur also got his beginning due to some hanky panky between a British King and the wife of a local ruler. The story actually said beautiful wife but all fairy tales start that way when there is hanky panky between a King and someone; evidently they could not help themselves ?

The mysterious origins of the British archaeological site most often associated with the legend of King Arthur have just become even more mysterious.

Archaeologists have discovered the impressive remains of a probable Dark Age royal palace at Tintagel in Cornwall. It is likely that the one-metre thick walls being unearthed are those of the main residence of the 6th century rulers of an ancient south-west British kingdom, known as Dumnonia.

Scholars have long argued about whether King Arthur actually existed or whether he was in reality a legendary character formed through the conflation of a series of separate historical and mythological figures.

But the discovery by English Heritage-funded archaeologists of a probable Dark Age palace at Tintagel will certainly trigger debate in Arthurian studies circles – because, in medieval tradition,


Also I tried to post this in the History forum twice but all I got was the typical stand-by message ?
sorendreier.com...

posted on Aug, 4 2016 @ 08:40 AM
link
a reply to: 727Sky
Tintagel doesn't have a central place in the cycle of stories about Arthur, except in the birth story. The original point of the Arthur figure is that he was supposed to be a fighter against the invading Saxons, and Cornwall would not have made a suitable base of operations. It is quite out of the way, at the wrong end of the country.
(I have a book which argues that Camelot was really the location which the Romans called Camulodunum, the modern Colchester)

There may well be a Dark Age site at that location, but it would have belonged to a more local ruler.
In the Arthur stories, Cornwall is assigned to King Mark.

Was going to post this yesterday but frankly i don't have the confidence for posting my own thread! S & F for sharing.

If nothing else comes from it, it does at least add a bit more reality to the story. Particularly when they state this palace was no longer around about a century before the first Arthur stories began to emerge - in other words, with no physical evidence to observe, the stories put the palace in the correct location. Whilst this discovery confirms nothing, it does at least start to bring the tales out of the realm of myth.

originally posted by: DISRAELI
a reply to: 727Sky
Tintagel doesn't have a central place in the cycle of stories about Arthur, except in the birth story. The original point of the Arthur figure is that he was supposed to be a fighter against the invading Saxons, and Cornwall would not have made a suitable base of operations. It is quite out of the way, at the wrong end of the country.
(I have a book which argues that Camelot was really the location which the Romans called Camulodunum, the modern Colchester)

There may well be a Dark Age site at that location, but it would have belonged to a more local ruler.
In the Arthur stories, Cornwall is assigned to King Mark.

I agree however I thought I would play along with the article... Thanks for the more historical view though .

c/o Bing Images Search
edit on 4-8-2016 by mysterioustranger because: (no reason given)

King Mark of Kernow. As you stated, this was a palace from the early stories rather than the home of Camelot. Did not Kernow supposedly fight for Arthur though?

I always favoured Camelot in a more inaccessible location, such as the Welsh valleys or even further North (Lancashire and Cumbria also have claims). This would fit with early Britain being more "North centric" than the next 1500 years of our history.

Unfortunately though, until we find Excalibur, Camelot or the Lady in the Lake i fear this will remain as nothing but interesting (rather than a factual story of Arthur).

Tintagel Castle was built in the early medieval period, way after the Arthurian period. All those castle remains in Tintagel are from then and later. The Cornwall Tourist board though like to play on the remains as it geenrates income!

originally posted by: mysterioustranger
a reply to: 727Sky


Omg, they've unearthed King's Landing from game of thrones! Lol. Seriously though, great discovery but it does seem a bit out of the way.

posted on Aug, 4 2016 @ 10:29 AM
link
The story of Arthur is every castle back then. I visited one such fantastical place when I was a kid, in Germany.

The castle in Coburg. The ruins in the OP can't hold a candle to this. I know, sorry for the misdirect (skip on down)...

You ever bored with finding a vacation, visit this one. It was never taken, is filled with history treasured art and weapons.


This is a viable story. I used to live near here.

Clovelly Dykes are barely noticeable from the road, it just looks like a bank with trees on it. Many local people are unaware of the earthworks. As you walk in through the fields new visitors are always awestruck by the atmosphere and harmonious earth modelling.

This is the base of a mounted strike force.

The exits are downhill, and on the opposite side from the obvious approach.

Some parts are protected by three rings of earthworks, other parts by only one.

Because the occupants of those parts aren't supposed to be in the fort if it is attacked, they should be outside mounted and armed.

This was the military and administrative heart of Arthur's Britain. 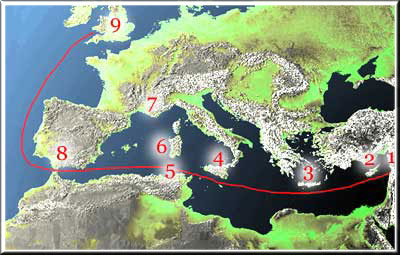 Anyone travelling down the North coast to Tintagel can visit Clovelly Dykes and see how the line-of-sight communication system would have worked.

This hillfort is on private land - permission should be sought from East Dyke Farm before visiting.

Most fairy tales begin in reality.

While the is no validity in the claims of a lady in the lake or a sword in the stone, who's to say there was no King Arthur? I've read about the Tintagel connection before and despite the Chinese whispers He could have been a real king. The same goes for Robin Hood-he could've been just another bandit but then Chinese whispers could've warped the story and over centuries a humble archer becomes a legend.

Nevertheless I believe these stories are based on real people but their stories have been exaggerated.

"Didnt say I held any merit in any claims...I studied castles awhile back when looking into my ancestral family's castle in Pembrokeshire, Wales. Another is in Ireland, still another in England itself, all holding the family's name.

The Welsh castle gardens are still used today for weddings and events, although the chapel is quite small, the estate grounds are held by the National Trust I believe...or however its termed...along the Pembrokeshire Coast. The town and river alongside both holds the family name.

In researching that, I'd come across Tintagel...there followed many tv specials and documentaries mentioning it (as legend of course). Most assured, they are incorrect, even if one could prove Arthur existed. Another legend was below Tintagel was a cave where Merlin (also highly questionable and legendary) rests.

How optimistic.... I'd have to know if Arthur..and Robin ever existed 1st.

Was there a sword in the stone? Did a real "Robin Hood" exist to shoot an arrow from his dying place and asked to be buried where it landed?

Who knows? Certainly not you or I. A legend is just a story not proven...

Well, I can say for a fact the story is "truthful". But, if I'd give away facts to the story I'd piss to many "weirdos" off..

So I learned just to keep quiet about some things, so the "weirdos" are somewhere believing in a higher purpose..

I 've been DYING to ask ,what if a tourist finds the sword somehow?

Anyone can find the sword, well, almost..

originally posted by: cavtrooper7
a reply to: Flavian

I 've been DYING to ask ,what if a tourist finds the sword somehow?

Dammit...you just semi-wasted an hour of my time going down memory lane (via Wikipedia and online pictures) of all the places that I visited while I lived in Germany. Of all of them, my favorite still has to be (barring all of the tourists, of whom I was one) Rothenburg ob der Tauber.

I was stationed with the 1st Infantry Division outside of Würzburg in Bavaria. I did more drinking than traveling, but when I did travel, it was mostly into the southern region of Bavaria and into Austria.

Thanks for the unintentional trip down memory lane.