I think they are preparing for Trump's assassination.

posted on Aug, 4 2016 @ 02:40 AM
link
I've seen some signs that suggest that Republican establishment people are preparing for Trump's assassination. I think they'll do it if CNN's lies don't work and Trump pulls ahead by the time the election comes. The mainstream media has reported that Republican officials are preparing themselves for a scenario in which Trump drops out or cannot run. They are trying to put out a narrative that Trump is mentally ill. That would be the excuse to institutionalize him. Of course the inability to run also includes assassination. The media strangely did not mention this possibility. Also a man was found breaking into Trump tower with a weapon with a silencer. Supposedly it was a former FBI agent whose been dead since 2007. Could be a fabrication. I don't know.

Is there any other source on the sweeper?

originally posted by: Adaluncatif
They are trying to put out a narrative that Trump is mentally ill.

Trump is doing that to himself....

Also a man was found breaking into Trump tower with a weapon with a silencer.

Do not believe everything you read on the internet.

Trump is shooting himself in the foot enough, then there is his court case...

Dems wont shoot him, a Republican will. If at all.

posted on Aug, 4 2016 @ 02:46 AM
link
Naw. Right now appears Trump doesnt stand a chance . Hillary up by 10 . And with Hillary's modus operandi it would be a "forced" suicide. Something like an EOL assistance.

posted on Aug, 4 2016 @ 02:48 AM
link
No one needs to he is doing a political suicide as we speak.
I want him in also but he will lose by a big margin.
I actually think Clinton has more chance of getting assassinated.
edit on 4-8-2016 by TheKnightofDoom because: (no reason given)

originally posted by: Leonidas
a reply to: Adaluncatif

Dems wont shoot him, a Republican will. If at all.

Dems are more likely to shoot him. All the mass shootings have been done by dems.

Out of all the reasons I can see causing Trump to not make it to November, being offed by a disgruntled nut is, like, way down on number eleven or so.

The guy struggles to string sentences together, for crying out loud.

originally posted by: Gothmog
Naw. Right now appears Trump doesnt stand a chance . Hillary up by 10 . And with Hillary's modus operandi it would be a "forced" suicide. Something like an EOL assistance.

It certainly has swung in Clinton's favour, however last week Trump was up by 7. Was Hillary out of it last week?
Still a long way to go. The media is entering a new phase where they are doing everything they can to push the narrative that it's over now, but the crowds for Trump are growing and his finances have just swelled massively, with over $70m raised in July to add to the $50m in June. He now has over $70m cash on hand in his campaign. The media are still reporting his May numbers before the fundraising started as part of their narrative.

It's advantage Clinton, but it' snot over yet. So much can still happen and don't be fooled by the MSM. Even the latest Khan attack is starting to unravel after he's been outed for his dealings with Clinton.


You mean the pay-per-view the DNC put on ? I heard he got 50 usd and a Clinton logo button for his commercial . Oh , and got to keep the Constitution pamphlet the DNC provided .
I jest , (maybe)
Peace

The Statue of Liberty should come to life and kill both of them before it's too late.* 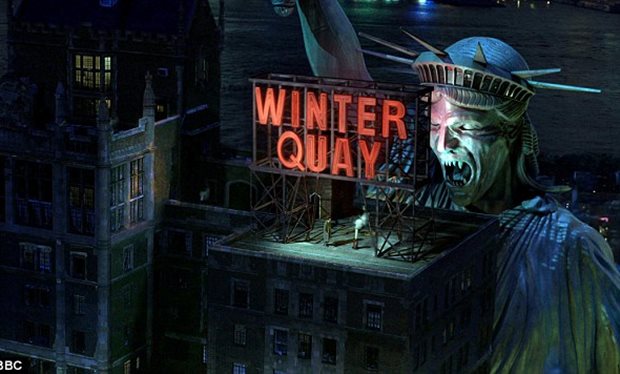 She'd make a badass movie monster. It's never struck me till now how well designed she is for murderous mayhem.

The image is cool.

originally posted by: Kandinsky
a reply to: Adaluncatif

The Statue of Liberty should come to life and kill both of them before it's too late.*


Another Ghostbusters II reference. This is getting out of hand!

posted on Aug, 4 2016 @ 04:37 AM
link
how far would the Clinton machine go to ensure Hillary becomes President?

the foundations for Hillary's Presidency were made years ago via the Clinton Foundation. She's made some pretty big guarantee's to foreign government officials, big business managers and democratic donors..

Does she have it in her to locate some intelligence types wanting to get rich and willing to do some blood work?

All they would need to do is stake out a known drug den.. watch the addicts coming and going and scan the areas smart phones for automatic data dumps.

Profile them, find someone who fits the bill... drug them, program their actions and drop them off close enough to a Trump event.

Of course, being employed by the HRC/DNC foundation.. you'd be able to slip this weapon past security to lie in waiting as trump leaves a stage...

walks down a hallway...

I think both Trump and Hillary are mentally ill. They both need to be put away in a very special hospital, with a nice white jacket.

BlueAjah
+14 more
posted on Aug, 4 2016 @ 05:41 AM
link
Trump negativity is a fiction created by the media. People keep ignoring it, but everything the media is spinning to make Trump look bad has been misquoted and misrepresented.

In other words, nothing has changed, really. This has been going on since Trump started running in the primaries. The establishment has always been against Trump, the Dems have always hit on Trump, and Trump has always said what he thinks about things. The only difference now is that when Trump surged ahead in the polls, the establishment Republicans and Dems, and the liberal media, started to panic, as in "oh-no-he-might-actually-win!!!!!". So, they put the machine into overdrive.

Seriously, nothing about Trump has changed. The people who are paying attention, going to his rallies know it and paying attention to his speeches know it. Trump is still for the people and for America. The Trump campaign has said that the recent hype is fiction.

People need to calm the heck down and see reality, not the hype pushed by the media.

originally posted by: Kandinsky
a reply to: Phage

She'd make a badass movie monster. It's never struck me till now how well designed she is for murderous mayhem.

The image is cool.


It's a scene from Doctor Who. Angels in Manhattan, if I remember right.

I'm not a trumper... But everyday I get a news alert on my phone about him saying or doing something damaging, or how he is terrible etc etc.

That crap makes we think about actually voting for him.... Even though there is no one to vote for. And everyone talks crap about Fox News... One news outlet when there are 10s of outlets spewing anti republican crap ( disclaimer, trump is not a republican)