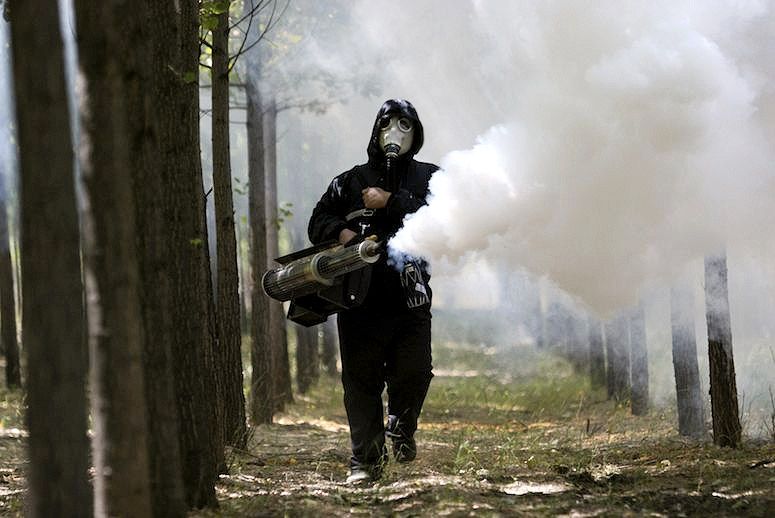 As I write this, I’m looking out at a salt marsh that requires regular spraying with the herbicide glyphosate (sold by Monsanto as Roundup) to keep it from being smothered under dense, eight-foot-high stands of an invasive grass called phragmites.

At a nearby lake where I’m a member of a rowing club, the aquatic vegetation is now so dense that it’s being treated with another herbicide called flumioxazin. And along the roads back and forth, even more herbicides get applied, to keep down weedy vegetation along the edges.

You may know by now that glyphosate is used extensively in the US and other countries to grow crops, but you may not know about it's other uses in maintaining native ecosystems.

In 2014, 250 million pounds of the chemical was sprayed across the country, equaling roughly one pound for every acre used for crops. The amount used to curb other invasive plants growing naturally in the wild is still a mystery.

Trends in glyphosate herbicide use in the United States and globally

Two-thirds of the total volume of glyphosate applied in the US. from 1974 to 2014 has been sprayed in just the last 10 years. The corresponding share globally is 72 %. In 2014, farmers sprayed enough glyphosate to apply ~1.0 kg/ha (0.8 pound/acre) on every hectare of U.S.-cultivated cropland and nearly 0.53 kg/ha (0.47 pounds/acre) on all cropland worldwide.

A new study in the Journal of Applied Ecology has attempted for the first time to quantify the amount of herbicide being applied to America’s wilderness (non-agricultural land).

Even though the amount used is significantly less than what is used agriculturally, the numbers are still “astonishing”, says Viktoria Wagner, a plant ecologist at Masaryk University and lead author of the study.

She and her coauthors found reliable information on just 1.2 million acres of wildlands, a fraction of the U.S. government’s 640 million acres of parks, forests, refuges, and rangelands. But in a single year, that sample was sprayed with a total of 443,000 pounds of herbicides—equal, said Wagner, to “the weight of 13 school buses.”


The new study is not aimed at stopping the use of glyphosate, but the data is interesting enough and is sure to fuel the growing distrust people are developing towards it’s use.

Land managers say they have an obligation to take action against invasive species that would normally wreak havoc on native ecosystems that they’re trying to “protect.”

Pandora’s box has been opened and the only way to deal with what some would call an invasive species is to poison it away at the expense of our health and the surrounding wildlife.

For instance, cheat grass, an Old World species that has run wild across the American West, destroys the food value of rangelands for wildlife, particularly dwindling populations of greater sage grouse.

It also causes big, hot wildfires that kill off sagebrush, depriving the sage grouse of shelter. Fast-growing kudzu, “the vine that ate the South,” smothers native plant species and pulls down trees. Water hyacinth chokes ponds and lakes everywhere. Ending herbicide use would just speed up the pace of destruction.


The team includes researchers from the United States, Canada and Mexico, who worry about the complete lack of record keeping from each country. Details remain incomplete or nonexistent about where herbicides are being used, in what quantities, at what cost and to what effect. This is absolutely unacceptable and shows a complete lack of respect and consideration to all things related.

“The point of our paper,” said Nelson, “is that we’re using a very large amount of herbicide” on wildlands in an attempt to restore native species, “but we know almost nothing about effects on native plants”—or, for that matter, on pollinators and other native wildlife.


A good example of this is also a rather unfortunate struggle between farmers and the monarch butterfly. Intensive use of glyphosate on farms has indirectly destroyed tens of millions of acres of native milkweed, an essential food source for the butterfly, but just another weed for the farmer. Butterflies do not make the farmer money.

A massive increase in the cultivation of genetically engineered corn and soybeans in the Midwest farm belt has resulted in the elimination of milkweed, the sole source of food for monarch caterpillars, the study states. The population of monarch butterflies, meanwhile, has plummeted 90 percent over the past 20 years, from 1 billion to 35 million.

A separate study was conducted on two other commonly used herbicides, leading to the discovery that both inhibited germination of native and invasive plants.

This seems extremely counterproductive and careless considering the quick killing of invasive species is causing a slow death to the ecosystem they’re being removed from.

The US currently spends billions of dollars a year on these ecological “restorations”, and researchers are saying that we are spending that money blind. Hey, as long as that money keeps pouring in, who cares about being safe and efficient?

Both the U.S. Forest Service and the Bureau of Land Management, the two largest land managers in the country, are working to change that. The BLM last year launched its National Invasive Species Information Management System, an attempt to standardize collection of data on invasive species treatments.


Maybe we should spend less money arming the two organizations and more on lab coats and testing equipment. I'm afraid the data scientists would uncover could never justify the damage done and in their minds, is better kept a secret.

The world relies so heavily on a minority of entities to cultivate, grow and distribute the foods we eat and until we increase self sufficiency or demand they change their ways, we’re forced to gamble away the health of our bodies and the environment. I just hope we can fix it before it's too late.

LOL! Huge surprise there, much like the fluoride added to the water supply for decades in the name of health! Oh and saccharine was supposed to be a healthy sugar substitute, replaced by aspartame, we know where that went.

originally posted by: forthelove
a reply to: eisegesis

LOL! Huge surprise there, much like the fluoride added to the water supply for decades in the name of health! Oh and saccharine was supposed to be a healthy sugar substitute, replaced by aspartame, we know where that went.

Glyphosate Kills Bee's so "Saving the environment" by poisoning it is total Horse S#it.

No argument here, if people knew what goes into a bee process to make honey they might give a hoot. Bees are the very foundation of our food supply, the only food source we would need to survive and happens to be the only source without an expiration date. That and cockroaches, but I would die first before I ever ate one of them, rather eat bee poop.

I wonder what the cost to Monsanto would be if they had to use an engineering process to properly dispose of that junk.

Great OP! Thorough and balanced with unbiased information and lots of food for thought. The biggest question for me regarding the explosion of growth in the use of glyphosate is: what are the effects on pollinators - bees in particular - and are they irreversible?

I wonder what the cost to Monsanto would be if they had to use an engineering process to properly dispose of that junk.


You would have to research whether glyphosate is a byproduct of another manufacturing process to support that idea, which I am unsure of. Considering Monsanto's history, I wouldn't be surprised.

I'm under the assumption that it was created with good intentions (for business and agriculture in general), and only after it became popular did the damage it does have to be hidden in order to secure a profitable future.

Fluoride, which is a byproduct of aluminum, steel, cement, phosphate, and nuclear weapons manufacturing fits into that exact scenario. If we can turn waste into want (through subversive marketing), companies can make a profit at the consumer's expense rather than disposing it at theirs.