This is how UK Police Manage Community relations!

I don't see the point, not impressed.

sigh... thanks for the input...so much for the positive happy story!

I dont see why the police have to pay at all.

The auto-wrap company can just do it, if they dont then well, maybe the police wont get to them as quickly when theres a robbery or fire.

Thats the way we do it in the southern states!

I'm not a positive guy. I'm pretty tired of everyone jumping on this bandwagon.

Is there even a reason for having these pride events anymore? What is their purpose? To annoy people?

I've seen little kids twerking around like they were dancers in some sexual hip-hop video. I don't like that all, I think it's a symptom of degeneracy.

This is just part of a larger agenda of relativisation and solipsism. Feelings and identity over reality and fact like that old man that all of a sudden made the choice to be a six year old girl. That's mental illness and it needs to be labelled as such.

I don't think homosexuals are oppressed at all, in fact it's been "cool" to be gay for quite a while now. But I suppose this campaigning fulfills the need for some to act out their infantile rebellious fantasies. Have to fight the power, even if there is no power or if it's wrongly designated.

Like feminists in Sweden talking about a patriarchy in a country where all political parties are staunchly feminist and pay their respect to the feminist ideal. Where the media is constantly - and I do mean constantly - speaking of things from a feminist perspective, endlessly repeating feminist memes. Their whole reason for being is completely contrived, the cognitive dissonance is quite amazing to behold.

It's all part of a broader framework of cultural Marxism and that is the source for all this relativism, all this solipsism, all this emotional pandering, all this newspeak and all these sickening double standards at play.

Nice though.. rainbows. Very cool but I won't be impressed unless those rainbows are in fact Bifröst the bridge to Asgard.

I don't like seeing a public institution that must represent everyone getting 'political', but maybe things are different across the pond. I would be disappointed to see our police support any special interest group...can you imagine if they painted religious crosses on their vehicles?

Sorry, this just seems off to me.

sigh... thanks for the input...so much for the positive happy story!

posted on Jul, 22 2016 @ 11:03 AM
link
Should the Police decorate for every parade, or do they play favorites? If not, do you really think a police riding around in a clown car inspires respect?

On a side note:

how does the Muslim community feel about this?

posted on Jul, 22 2016 @ 11:14 AM
link
Over here the policing is by consent. The police are from and of the community.
It therefore follows that they reflect this fact in such ways.

I can remember being a bit of a yob with my mates as teenagers and playing 5 a side footy with the local cops most evenings when they were round our way.

Sometimes it's too easy to see them as some distant, militarised arm of the state. I've been there myself.
But small gestures like this go a hell of a long way to keeping the peace, which is the main job of the cops.

originally posted by: PhyllidaDavenport
I just had to post this little ray of sunshine as it quite made my day! Sussex police got some stick over their show of support at the last gay pride event with their rainbow painted car, so Chief Inspector Nev Kemp decided to stick two fingers up at the "haters" and did it again only BIGGER and also painted two motorbikes as well. For me this is a cracking show of support despite the silliness over the measley cost of £420 which a couple of joe publics thought could be better spent elsewhere. I disagree!
Last year's Police Car


LoL!!! Wow, that's something else. Instead of a Rainbow Pride police wagon in my Citt the PD has a giant blue armored SWAT military truck. Outfitted with High tech weaponry, a water canon and storage for body armor. It's a $&%#@$ world when the Cops in my city are better kitted out for combat than my dad was doing Recon in Vietnam and Cambodia in the late 60's. Cheers to that British policeman!!

posted on Jul, 22 2016 @ 12:06 PM
link
Sounds a good use of money to me, Brighton is basically San Fransisco over here where all sorts of the non straight community hanging out (i don't know what todays correct acronym is so i'll pass on that rather than getting it wrong for missing out a letter or two).

Its more about being part of the community as a whole and a few hundred quid for some signage aint alot and probably will be worth loads more in the PR stakes.

There is a lot of abuse in the community and getting them to open up to pc plod could save lives so why not?

posted on Jul, 22 2016 @ 12:34 PM
link
That`s actually pretty cool it looks like something from a Dr. Seuss book, as opposed to this evil darth vader looking police vehicle: 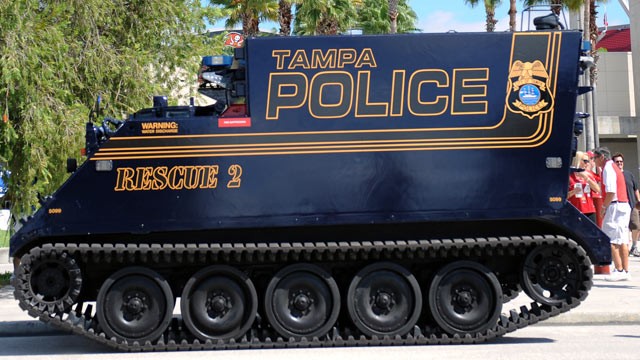 Just because you`re going to jail doesn`t mean it has to be a gloomy experience. "into the van gov`ner, mind your head, right you are, off we go then"

originally posted by: PhyllidaDavenport
a reply to: Rapha

Noddy Land? Well what if we are? We survive and rarely have the incidents we see on here from the USA and elsewhere so something must be working....maybe its Big Ears!

If that bugger turned up on me doorstep I'd be scared sh8tless!! Is that really necessary?

I don't like seeing a public institution that must represent everyone getting 'political', but maybe things are different across the pond. I would be disappointed to see our police support any special interest group...can you imagine if they painted religious crosses on their vehicles? Sorry, this just seems off to me.


The van and 2 bikes are used specifically for Brighton Gay Pride which is a huge event in a very large gay area. There is no need to have crosses on the side of police vehicles...christians aren't a minority

Here's some fun videos of our Police having fun at the Notting Hill Carnival too WARNING some seriously bad dancing!

Thanks fellow Yorkshire person. Personally I think our coppers are great. Never had a problem with them. Perhaps its simply down to different attitudes or maybe even upbringing...I dunno...I'm sure there are some twats out there but luckily I have found they aren't a bad bunch at all to the point where my youngest daughter is actually joining up in 2yrs when she finishes her policing degree.

originally posted by: kosmicjack
Imagine what a psychological difference it makes for children. It's easy to see how all this equipment and tech that has been exported to the U.S. from theaters of war for use on our streets and against citizens might impact an entire generation of kids, post 9/11. Versus the happy van.