No Cheering, No Clapping, No Fun, No Future

Feel free to "punch the air, pull excited faces, and wriggle about on the spot" at Australia's Elanora Heights Public School—but whatever you do, don't clap.

Is it wrong to think that if you're sensitive to noise, you shouldn't be teaching elementary students? We all deserve to be treated with respect, but to stifle the free expression of joy in a child’s learning environment has to be questioned whether the needs of the few outweigh the needs of the many.

If that wasn’t enough, the ban on clapping emerged on the same day that an all girls school banned teachers from calling anyone “ladies” or “women”, forcing teachers and staff to use more “gender-neutral” terms.

The request was put to teachers at a staff meeting earlier this year discussing the implementation of the Safe Schools anti-bullying program, the newspaper reports.

It was suggested to teachers that by using such language they could be seen to be breaking the law and could be at risk of being sued by LGBTI students.

Back to the ban on clapping. 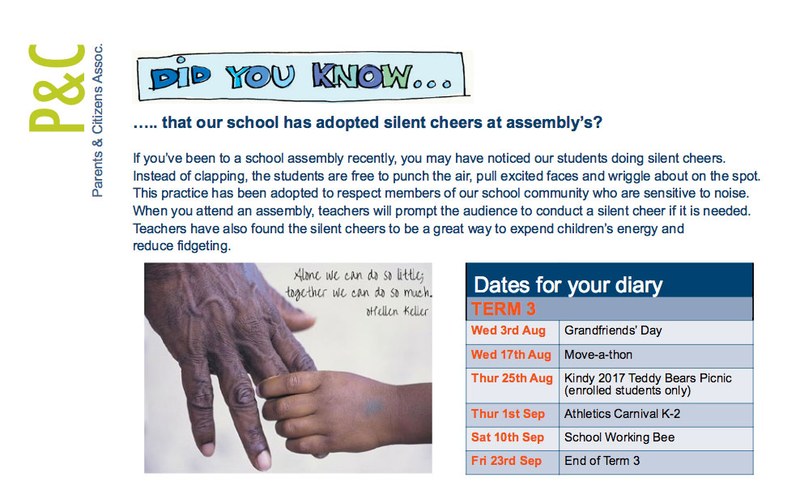 The school’s new policy not only reduces a child’s excitement to a silent cheer, they must be prompted by the teacher only if needed.

I understand that it can be hard to quell a room full of excitable children, but if a child isn’t allowed to laugh or cheer with their classmates, when appropriate, because the teacher is “sensitive” to noise, they might want to reevaluate their position.

This ban follows a political correctness “outbreak” taking place in the Australian school system, I’m guessing as a testbed for future deployment in other parts of the world. We've all seen Obama and Hillary praise Australia and the U.K.’s gun laws in the past.

At what point does it stop?

“We have a lot of kids who walk up and hug each other and we’re trying to encourage all of us to respect personal space,” Mr Grant said. “It really comes back to not everyone is comfortable in being hugged.”

“There’s a range of methods including a high five or a particular knuckle handshake where they clunk knuckles as a simple way of saying ‘well done’,” Mr Grant said. “There are also verbal affirmations and acknowledgments.”


Make sure they don't hear that high five and keep you knuckle slapping to a minimum. Perhaps a tip of the hat, a wink or a smile. In fact, you better smile while you can. You'll soon be seen as mildly offensive to those with depression.

When asked what she would think if her teachers told her she couldn't clap, Frankie, 7, thought for a full minute and said, "I wouldn't mind."

Frankie seemed briefly concerned when asked whether it would bother her if people did not clap for her, like they did at her piano recital, but she pointed out that clapping makes some people, like her brother, feel shy.

Frankie hit the crux of the issue when she asked, "why would the teachers ban clapping?" To silence you, child.

I do find the ban on clapping to be incredibly weird and possibly harmful.

So "Wave em in the air like You just don't care" is still legal?

originally posted by: JimNasium
a reply to: eisegesis

So "Wave em in the air like You just don't care" is still legal?


"So tip up your cup and throw your hands up

And let me hear see the party say"

posted on Jul, 21 2016 @ 09:29 PM
link
What I find incredible is that nobody stood up and asked that teacher: "are you stupid or what?'
No, no, no today we don't confront our stupid anymore, today we change the rules to fit them.
We're going down, I'm telling you.

posted on Jul, 21 2016 @ 09:49 PM
link
And this is why we pay for private school, so our kid can grow up normal in a more or less regular environment where his teachers care about him and aren't afraid to give him a hug and kids are allowed to cheer and clap so long as they recognize the call to order that comes after an appropriate time of joy.

posted on Jul, 21 2016 @ 09:55 PM
link
Yea private school or home school them. There's a ton of education kids can get online and out in the streets. The last thing I'd do is subject them to the public delication system.

I weep for the future.

Insanity is the new 'normal'.

no clapping for kids at school ... man this, this

Thats a stupid rule made by more stupid people and they are educators no less....ugh....at least it only at that school as far i can tell.....my advice to anyone would be take your kids out and enroll them somewhere else

for some reason this article and its title reminds me of this song.