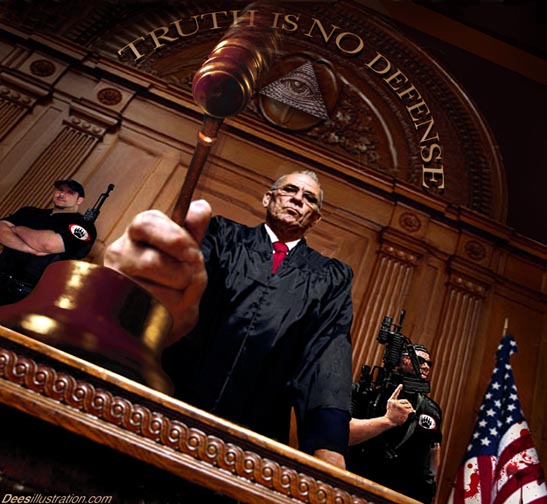 A homeowner in Finland has been sentenced to four years in jail and a hefty fine after fighting off three intruders who attempted to rob his house. The thieves, meanwhile, got lesser prison terms and are to be paid damages by their victim.

In April, a 35-year-old man from Hyvinkää, a town just 50km north of the Finnish capital, Helsinki, heard a knock on the front door of his suburban house and rushed to open it. As soon as he unlocked it, three strangers rushed in and launched at him, toting baseball bats and a gun.

The man retreated to the kitchen, where he found a knife and with it was able to overpower the intruders, two men and one woman.

The court spent nearly four months examining the case to come up with the unexpected ruling.

The homeowner has been convicted of “excessive self-defense and attempted manslaughter,” Helsinki news reports. He will serve an unconditional sentence for four years and two months, which he has to spend in prison. The man also has to pay damages to his attackers, with the fine totaling €21,000 (US$23,000).

Man defends himself from attack IN HIS OWN HOME and is sentenced to 4 years in prison and ordered to pay $23k in damages.

The criminals also get punished but only receive house arrest and are ordered to pay $3k in damages...

I put this in the NWO forum and heres why: there seems to be a conscious effort by TPTB to ensure that people cannot protect themselves.

Because it helps to ensure reliance on the state and discourage signs of independence.

Why own a firearm when I can hide in a corner hoping that nothing happens until police arrive, regardless of how long that might take.

The more dependent we are on the State, the more it helps to guarantee their power, control and longevity.

Do they realistically expect us to wait until we're half dead before defending ourselves?

The invaders already demonstrated a violent criminal intent by forcibly entering the home armed with weapons...

edit on 21-7-2016 by gladtobehere because: wording
edit on Fri Jul 22 2016 by DontTreadOnMe because: trimmed overly long quote IMPORTANT: Using Content From Other Websites on ATS

The newspaper does not provide information on the severity of injuries sustained by the home-invaders...


That would help explain his 'harsh' treatment.

Was that a 'carving' knife?


This is just so wrong.

There is no situation in which a man can legitimately be convicted of excessive use of force for self defensive puposes, when attacked in his own home, by three armed opponents, one of whom is carrying a gun.

I honestly do not care if he made the bastards suffer, crippled all three of them, cut the tendons to their lower extremities, put out an eye each, or made them all smile like the bloody joker. Three people trying to rob a man in his own home, should be expected to accept whatever consequences come of it, including being dismembered and displayed on pikes out the front of their intended victims house.

Scumbags. The homeowner simply should not be going to jail.

The blame has to be on the criminals creating the situation, forcing their way into his home armed with bats and a gun...


Lesson learned. If in Finland, kill the intruders (if they pose a serious threat to my life), make up story.

They didn't state the injuries but threw the book at him, instead.

Theres your sign. How do we know he didn't subdue them and torture them with a knife for an hour?

Eloquently stated. The Finnish people are not the kind to take this sort of nonsense laying down. I fully expect overwhelming public support for the man and a possible reduction of his sentence.

Nothing was said of the attackers, since this was never a problem before mass immigration can we assume that is was indeed immigrants?

A very similar story happened several years ago in the UK..

I vividly remember a T.V Show that outlined what is illegal and legal when defending intruders;

- no pre-determined weapons
- once restrained, do not inflict anymore damage.
- don't chase outside of property.

I remember watching this and thinking, "Oh YEAH! i'l make sure i'm being politically correct, whilst defending my home/family/myself from someone who has broke in with a motif which is completely unknown!"

Its just such a shame that our government and justice system is more concerned about the reactions of the innocent rather than the actions instigated by the guilty...

In the States that means shooting them, in the UK knock-down drag-out, ball bats and knives, huh?

Guy defends himself and his home and is rewarded with 4 years in gaol???

The mind simply boggles at the hypocrisy displayed!

Personalty i think the Man should be congratulated not punished.

Tell you this, stuff the laws. If someone broke into my home and i managed to subdue the bastards theirs some torture happening with a few fingers being broken at the very least.
edit on 21-7-2016 by andy06shake because: (no reason given)

That is the saddest thing I've ever heard in my life.

Is that what this one man did? Subdue three attackers with a gun while armed only with a knife, manage to tie them all up, and then torture them?

I guess that makes more sense then the powers that be in Finland attempting to set a precedent that when someone is in your home you do not have the right to defend yourself.

No your not aloud to have a weapon on "stand-by".. thats classed as preempted attack in the UK.

You can only use objects found naturally around the house if needed..

It's fun to see those buried emotions rise to the surface.

You can try to promote progressiveness most days ... but, it only takes one story of injustice to make you roar.

They didn't state the injuries but threw the book at him, instead.

Theres your sign. How do we know he didn't subdue them and torture them with a knife for an hour?


I doubt that happened, but they invaded his home. They deserved whatever treatment he deemed appropriate. Not that I condone torture of any kind, but next time, they'll think again before robbing someones castle.

ETA: Finland should be ashamed!
edit on 7/21/2016 by Klassified because: clarity and ETA

There is no mutual exclusivity where progressive ideas are concerned. I am very left wing in an awful lot of ways, but I would also like to live in a country, where I am free to carry a sword if I choose to, for my defence, the defence of others, and my community more broadly. I also believe that a persons home is sacred, and invasion of it, especially armed invasion, is a crime which ought to render the homeowner utterly blameless for whatever happens to someone who intrudes with ill intent.

I genuinely believe once you pass that step of legality, IE; braking into someones home.

You as a human, lose your rights.

You hand your rights to the person your conflicting your crime on, and if torture is what they see fit? well hey its fine by me!