"It becomes harder to hate when there is familiarity."~C Rizzy 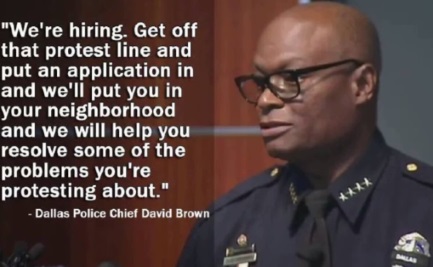 posted on Jul, 19 2016 @ 06:08 PM
link
Good for them! Spot on statement that its hard to hate when one realizes the person on the other side of things is just a person too.

a good thread will turn into a nasty one inevitably... jeez.

yea. this is a rampant issue of police getting killed by armoured vigilantes with rifles, you know all the times per year this happens or has ever happened vs. anything

You made my day! Thanks!


'Talk about' giving up military hardware and armor?

You do realize the flood gates opened because of just two guys? Google North Hollywood Shootout. It wasn't "people" that militarized the police, it was those two guys. Imo, Kind of an over reaction to bad handling of one incident.

Commending the cookout and agreeing with community policing, while disagreeing with the other two points turned the thread nasty?

My what thin skin you must have.

And the point, which sailed blissfully over your head while you were busy crying because I disagreed, is that NOW is probably not a good time to ask PDs to give up their rifles and body armor.

The conversation about police militarization goes back much further than North Hollywood, though it's an oft cited incident.

People complained about police carrying Tommy guns when prohibition era gangsters were carrying them. The coke war in Miami. The Miami FBI shootout. The list goes on. Each one of those events lead to some kind of change in law enforcement armament. It wasn't "just" North Hollywood. And now you can add Dallas and Baton Rouge to the list incidents that will be pointed to.

What I do think is that so long as civilians have access to rifles, law enforcement will. What I do think is that the application and deployment of the hardware needs to be dialed back. Using a Bearcat to punch a hole in a wall to get to a barricaded suspect is one thing. Parking it in the middle of a street at a protest to intimidate people is something else entirely. It's unnecessary. It's ridiculous. It's over the top. It inflamed tensions without need. And I've never said otherwise.

Being military you might not fully appreciate this, but:

The problem with "militarized police" isn't just that they have certain military hardware at their disposal. The problem is that they're being MILITARIZED (as a group).

And then with the War On Drugs there's too many of them, who are harassing and hurting people for the wrong reasons.

edit on 19-7-2016 by IgnoranceIsntBlisss because: (no reason given)

Some people didn't get the memo.

Being law enforcement and prior military, I pretty intimately understand the difference in the two entities and why they exist.

Which is why I feel the way I do about the need to dial down the deployment of military grade hardware and equipment, and feel that law enforcement will continue to have access to the same level of weaponry civilians have.
edit on 19-7-2016 by Shamrock6 because: (no reason given)


The conversation about police militarization goes back much further than North Hollywood, though it's an oft cited incident.


It was the dividing line between before cops had assault rifles (euphemistically called "Patrol rifles") and after, when every patrol car had one in the trunk. Before the North Hollywood Shootout, only SWAT had military rifles.

That didn't last long, now they are open carry at most dispatch calls. Not only, Hardware returning from foreign wars has entered the ranks, including MRAPS, military grade explosives, (the dallas shooter was killed with C4).

The Boston Manhunt and Ferguson riot suppression looked like the army had invaded. The differences between civilian and military authority is evaporating, right on schedule.

I can appreciate that. The idea they carried Saturday Night Specials when Capone's thugs had Tommy Guns was absurd.

But the goose-stepping power tripper brigade thing, my impression is that "militarizing" them only encourages that mentality, while enhancing the appeal for that kind of individual to join up.

For instance, in my county the sheriff's normally wear the 'shiny' green police style uniforms. But on occasion I see them all wearing olive drab military uniforms, like all of them the same day. And they're running around like SS ego maniacs when they slide into the olive drab. If I had video of what they were doing on this one stretch of road the first time I saw it it'd blow everyone away. They had car after car pulled over down this one 2 mile stretch of road. I was in a huge company truck so they didn't notice me, but I saw about 5 cars pulled over down the stretch coming in. People out tearing the cars apart. On the way back out an hour later the same scene but new cars pulled over, and I saw when they had just pulled over the last car and they were approaching... they were approaching with guns drawn.

Oh, AND THEY WERE ALL WHITE PEOPLE GETTING PULLED OVER LIKE THIS, maybe some Hispanics, getting pulled over out in a sort of 'hick' town outside the big city.
edit on 19-7-2016 by IgnoranceIsntBlisss because: (no reason given)

We need more of this and less of the MSM race baiting stories.