This was brought to our attention:

Experimental explosion by US Navy.

How often does this happen?

Searching for "experimental explosion by US navy earthquake," at google leads to all sorts of crap sites, Sorcha Faal among them; but the above quoted excerpt is from the USGS; what gives?

May be related to the following program?

posted on Jul, 18 2016 @ 06:08 PM
link
Huh, definitely not what TrueAmerican assumed the other day after the latest 4-pointer in OK. Spotted it on the map & mentioned it in his thread, he figured maybe an underwater landslide, if not seismic.

I guess if you're going to keep an eye out for nefarious goings-on testing, the best way is to try to mimic a type & where it would be tested so you know what signature to watch out for.

See, this one really struck me as odd so I went looking for seismographs and waveforms and couldn't find anything on the public sites that was what I was looking for.

I am hoping TA will make an appearance and have something for us to look at that has a little more detail than what I was able to find.

When I was at China Lake there was an earthquake and we all looked outside and a mushroom cloud was rising above the mountains on the other side of the range.
edit on 7/18/2016 by onequestion because: (no reason given)

Yeah, I'm figuring that. I think it might also be testing a detection systems also.

Ooooh, might that have been a ping for some sort of ocean-wide imaging system?

originally posted by: onequestion
The tests ordnance all the time.

When I was at China Lake there was an earthquake and we all looked outside and a mushroom cloud was rising above the mountains on the other side of the range.

I hope you were wearing the brown pants!! 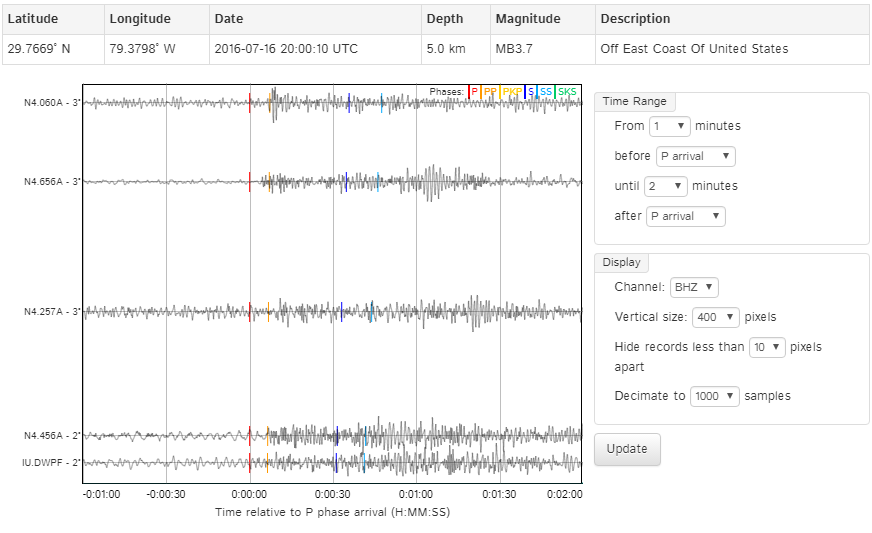 (click the image to make it yuuuge)
Those are the waveforms from the 5 nearest stations, according to the 'phases' tab under 'origin', from the USGS link you provided.

Also, if click on the waveform tab, you'll see a link to the Wilbur page associated with this event. That's where I generated the image. I just had to add the 'N4' network by clicking inside the 'networks' box; then stations 2-5 in the image above were available.

Was this what you were looking for?

Precisely. And thank you for the explanation!

I also see the other posts over in quakewatch regarding the 10,000 lb. explosive. That's a rough match for the Mw of 3.7 too. One online conversion calculator I used showed it as a bit over 5.3 ttnt, iirc.

Yeah, I saw that not long after I posted this thread and felt a little silly for making as big a deal about it as I did. But hey, I learned some stuff, thanks to Olivine. 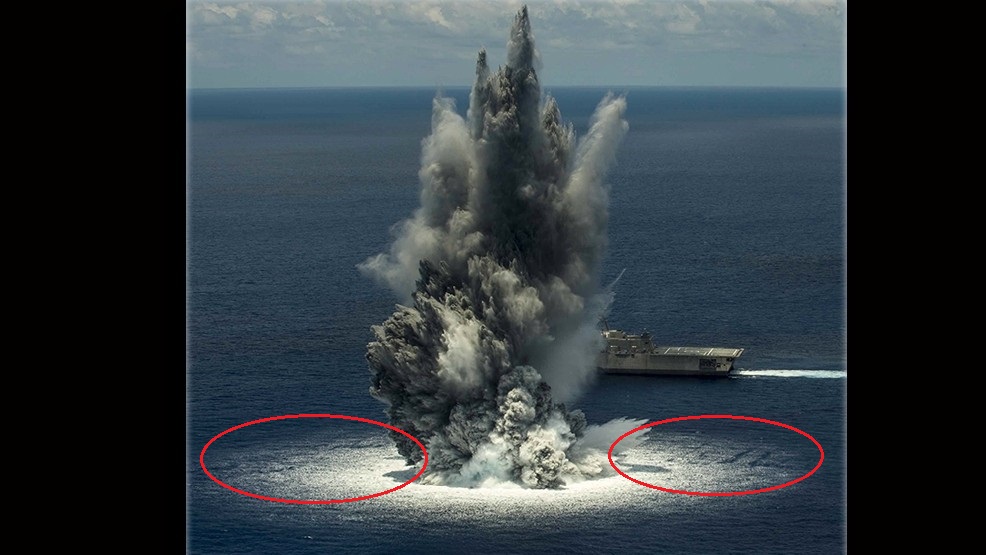 Imaging artifacts. Shadows? Is that noon local time? I'm not sure of the conversion for the time zone it's in.

Maybe something, maybe nothing.

posted on Jul, 18 2016 @ 11:54 PM
link
Wow- ok. Now that we know it was an explosion, I went and pulled raw seismic data from 5 stations, and was able to generate both waveforms and spectro of the boom:

For each station, the waveform is on top with its associated spectrograph below it.

Now what gets me about this is that the USGS did not immediately report this as an explosion. You see, they are supposed to be able to tell from close analysis of the waveform data. It's kind of scary to think, actually, that a massive explosion could go off and the USGS would report it as an earthquake initially. If you look closely at the waveforms, there are differences between these and a typical earthquake. The USGS is supposed to spot these differences and recognize them. Our national security could depend on it.

The waveform from station 656A is the clear giveaway that should have been recognized as an explosion. I know this signature from studying nuclear blast signatures. The waveform data from that last North Korea nuke test explosion looks strikingly similar, for example.
edit on Tue Jul 19th 2016 by TrueAmerican because: (no reason given)

originally posted by: wasobservingquietly
So, it could have been nuclear?

I am betting those weird linear patterns are from interaction between the pressure waves from the explosion and the surface water waves, amplifying each other in some areas, and cancelling in others.