posted on Jul, 17 2016 @ 09:33 PM
link
"But one candidate has made gains since last month: Libertarian Gary Johnson. In a four-way matchup between Clinton, Trump, Johnson and Green Party candidate Jill Stein, Clinton carries 42%, Trump 37%, Johnson 13% and Stein 5%. That represents almost no change for either Clinton or Trump, but a 4-point bump for Johnson."

Come one Rand come to the LP and escape that sinking ship.

I would love to see a 4-way debate with Clump and Stein and Johnson!

It's gaining traction. Best hope I feel that is in late Sept/early Oct. they post some kind of advert that reads along the lines of..."sick of the same two parties?!?" I think by then most will have had it with both sides and be open to the alternative even greater than now.

On the eve of the Republican and Democratic conventions, a remarkable 58 percent describe themselves as dissatisfied with a choice between the presumptive nominees.

As the beat goes on, Americans (hopefully), are waking up. The best part is, 72% see Clinton as “too willing to bend the rules.” Lets hope all that bending leads to a break.

originally posted by: John_Rodger_Cornman
a reply to: JinMI

It's shocking to find out how many people don't even know that there are other candidates besides D and R! Millions of willingly ignorant people only voting for the person that their light box told them to vote for, not even giving a second thought to simply googling for info about this election and the candidates.

15% should not be hard to get when the Democrats are pushing someone as insane as Hillary. Lots of Democrat voters would likely be easily convinced to vote 3rd party if they were only exposed to those candidates. Hell, if they were that easily manipulated into voting Hillary, they can be swayed to vote for a better candidate.

see "My Signature" box below... the sign is weather worn but still usable to send a message to the dog walkers & various jogger & cyclists in this country-club suburb area


remember my forecast, the day that Trump gets the official nomination the elites will start to mini crash Gold & Silver futures ...
that's the best time to buy at the sudden discount... July 18th-thru- July 22nd

the Hillary inauguration of Jul 25-29th will see the Status-Quo, strong dollar and metals recovery begin...to reinforce the meme of orchestrated prosperity in a world of multi-cultural aliens
edit on th31146887154418522016 by St Udio because: (no reason given)

Remember the Globe-zis may have dirt on him.

These people don't play fair and they mean business.

"We need camps for adults" - Hillary

I voted for Gary in 2012. I see Romney as a much worse candidate than Trump.

It's mainly the immigration issue that will keep me from voting for Gary. 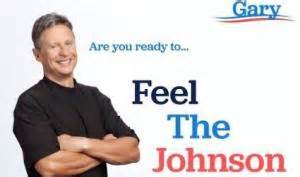 Looks like another person is looking into Gary Johnson.