posted on Jul, 17 2016 @ 01:07 PM
link
Confirms that Mohamed Bouhlel was not a Lone Wolf actor. Text messages found implicate at least 7 others now in custody. CCTV shows him casing the route 2 days before the event.


'Bring more weapons… It's good. I have the equipment': Terrifying final text messages of Bastille Day killer sent MINUTES before he murdered 84 people .


The Bastille Day terrorist sent a series of chilling text messages just minutes before his deadly attack on the Nice Riviera - delighting in his last minute preparations for the atrocity.

Mohamed Lahouaiej Bouhlel had asked for the 'heaviest truck' available when he rented the 19-tonne vehicle and had spent two days driving up and down the Promenade des Anglais working out how to cause the greatest amount of damage.

Now, details have emerged of text messages he sent moments before he slaughtered 84 people and injured hundreds of others who were watching a fireworks display.

He also took a selfie of himself in the truck between picking it up and going on his killing spree, sending it via SMS to others it has now been claimed.

Delighted: Mohamed Lahouaiej Bouhlel sent a series of texts just moments before his deadly attack , saying he was ready: 'Brought more weapons. It's good. I have the equipment'

Accomplices: Details of text messages Bouhlel sent from the phone found in the bullet-riddled cab emerged after seven people were arrested in connection with the attack

posted on Jul, 17 2016 @ 01:11 PM
link
"Brought more weapons" seems to indicate that he thought the weapons were real, not replicas, as has been stated elsewhere. So who did he get them from?

posted on Jul, 17 2016 @ 01:15 PM
link
I fear that with all the rapidly unfolding events that they will not be able to handle the incoming volumes or connect the dots before the next one occurs. Blmisisturkeydallasparisnicelouisiana all one big blurred mess

What good would fake weapons do for a terrorist? Either he didn't know they were fake (unlikely) or they weren't fake at all and the French government is lying yet again.

originally posted by: xuenchen
Sounds like the weapons were in fact real.


Could be. Who knows at this point. I just know I read that all but one handgun were non-functioning replicas.

originally posted by: xuenchen
Sounds like the weapons were in fact real.

From what I have read, there were some fakes mixed in with real weapons. I have steered away from the news for a while, just too depressing, has it been confirmed that there were real weapons?

originally posted by: whatnext21
I fear that with all the rapidly unfolding events that they will not be able to handle the incoming volumes or connect the dots before the next one occurs. Blmisisturkeydallasparisnicelouisiana all one big blurred mess

Yes we can. The dots are all connected. In fact they are lines.

Islamic extremists are invading at a rate of knots. kiss you bum goodbye, literally.. Will not be long before you get it too.

Just let untold thousands of them in..

What good would fake weapons do for a terrorist? Either he didn't know they were fake (unlikely) or they weren't fake at all and the French government is lying yet again.

No such thing as a muslim terrorist, or havent you heard.. oh wait, they never say it in the MSM.. oops.

posted on Jul, 17 2016 @ 02:32 PM
link
Is it just me?
I have the feeling that an tragic event, a tragic crime is used to spread the "IS" terror fear.
Even the MSM news here in germany is a little bit schizophrenic.
First they report that nobody really knows the motives of Bouhlel, including the french investigators, police. In the next sentence they try to spin everything in the "IS" direction. Then again they report and show relatives of Bouhlel that say again and again that he never was a religious person, that he was drinking alcohol and eating pork meat. That he had problems with his wife and the three kids, problems with the job and mental problems.

Why are the coming up with the sms "evidence" that late? They had his body, his wallet and his phone seconds after the rampage occured. And what´s that for a message?

'Bring more weapons… It's good. I have the equipment'

Good to use as "evidence" against him later, but doesn´t make sense when someone will go on a rampage with his truck, reckoning to get killed.
Really: I start my truck now, will mow down a lot of innocent people in some seconds, so come guys, and bring some more weapons... ???
And which equipment? A handgun, some alleged bigger weapons(we just have to believe that they were there) and some explosives/grenade dummies? Or the truck? As they tell us, nothing else was there.

If he really wrote and sended this sms, maybe he did it knowing he would die in seconds via police. And maybe he didn´t like those people and wanted to cause trouble for them even after his death? Knowing that everybody will think that they are terrorists, because of this sms?
Even that would make more sense than just to write a sms with: Bring more weapons, it´s good, i have the equipment... That sms doesn´t fit to what happened then! And which terrorists creates such a trace? Or are terrorists the only people on earth that don´t know that one mustn´t use the internet and cellphones to plan and start an attack?

The news here said that some of the arrested people, one was his wife, are released again.

The "funniest" thing is that a french minister yesterday came up with the theory that Bouhlel radicalized at high speed.
Because every statement made about him doesn´t fit the muslim terrorist agenda.
So then he radicalized an hour before he started the truck? Come on Mr french Minister, that´s ridiculous, laughable. How did he do this? Via an internet "IS" university??? Did he maybe get a certificate as evidence that he successfully radicalized? Did he bond a false beard to his face, or did he grew his in an hour too? There were unconfirmed rumors that he growed a beard the last days... I believe this immediately...

Look, Bouhlel had mental problems, was very aggressive, had more problems than he could stand. Aren´t this exactly the people that are used by whoever as patsies? Allegedly he had around 80.000Euros, but was unemployed. So, this money could come from the "IS", but really? I can´t believe this. But everybody could have lured him with a lot of money, and trick him into that event.

First i thought he just freaked out and the officials were trying to create a link to the "IS". Because "IS" sounds better than confused perpetrator, to extend the state of emergency, that otherwise had been ended at the end of this month. Now it´s again another three months more.

But if they come up now, today is the 17th, the event happened at the 14th, with some obscure "evidence" like hyperspeed radicalizing, "unforgeable" sms, some rumors about growing beards and a lot of other contradictory statements, then i don´t know what to believe anymore. Even if one wants, it´s really hard to believe the official story that they try to spin.

The "IS" didn´t even declare responsibility for the attack, but only that Bouhlel allegedly was a soldier of the "IS". Even security authorities here say that is nothing else than an act of freeloading. The "IS" propaganda agency doesn´t need two days normally, but minutes to celebrate a successful attack they started. And then they declare responsibility for the attack and don´t just assert that someone was an "IS" soldier, allegedly.

The "evidence" that is presented right now is evidence that they had to find on the first day. Like the sms on his phone, like the alleged videos of him, allegedly "exercising" his attack days before it happened. Didn´t see them yet, but i wonder if one can recognize Bouhlel(and his beard xD) clearly. Why did all that need so long, that are things you search for and find out in hours, if you are alone. And the security authorities aren´t working alone.

originally posted by: AdmireTheDistance
"Brought more weapons" seems to indicate that he thought the weapons were real, not replicas, as has been stated elsewhere. So who did he get them from?

What I ask here is, why his 7 contacts did not show.

Maybe he was sold the fact it wasn't going to be a lone job, but his orders changed once he got there?

posted on Jul, 17 2016 @ 07:29 PM
link
I don't think most European officials understand the power and value of the "lone nut explanation" to the degree that American officials do. Hence, the messaging confusion.

European political sophistication is an illusion.

Here in the US the truth is immediately suppressed and controlled with false narratives with the public never knowing what's really going on or why.

posted on Jul, 17 2016 @ 10:09 PM
link
Awesome how the French authorities release this. We will never hear a word about the anything found in connection with the Orlando shooter.

posted on Jul, 18 2016 @ 12:19 AM
link
I've been racking my brain about this whole incident since it happened. The whole fake gun thing just makes no sense at all! None whatsoever.

Something is just not adding up.

It seems to me firearms which were even remotely convincing looking would be more difficult to come by than real ones. What purpose could fake firearms possibly serve? There's simply no explanation.

Either the firearms and grenades were in fact real and authorities are intentionally misleading the public (not like that would ever happen!) to quell the public anxiety that this tragedy was a much larger, coordinated and planned attack.

OR..This was some black ops terrorist sting operation gone horribly wrong. Did the perpetrator figure out he was being set up, discovered the weapons were fake, then freaked out and went on a rampage with the truck (instead of a mass shooting with his terrorist co-conspirators).

OR..Was this guy maybe even working as an informant for the authorities who were trying to nab some bad guys, but then went rogue and flipped out.

One thing is certain, there's a LOT more to this tragedy than what has been reported!!

ETA...a guy on a suicide mission with a truck would stand to gain absolutely ZERO by trying to rip-off some of his terrorist buddies with fake guns and grenades. Why would he even waste his time acquiring them and/or bringing them along?

posted on Jul, 18 2016 @ 12:47 AM
link
Bring more weapons and grenades - as the French police seem to think I drive on the right and not on the left this should be easy. Why is there not ONE shot directly where he would be sat everywhere BUT at the driver's seat .
Was he sat on the right ?
Was the lorry actually remote control being driven by someone else? (sarcasm). 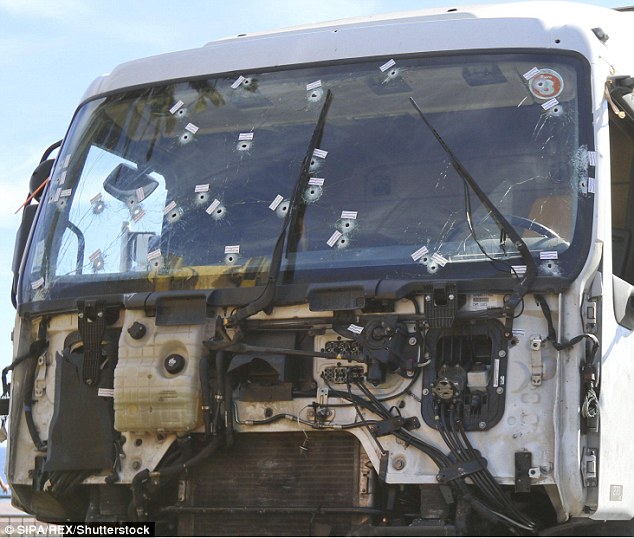 Depends on the angle they were shooting from. Surely they weren't standing directly in front of a speeding Semi. Most likely on the Right side (passenger side) of truck.