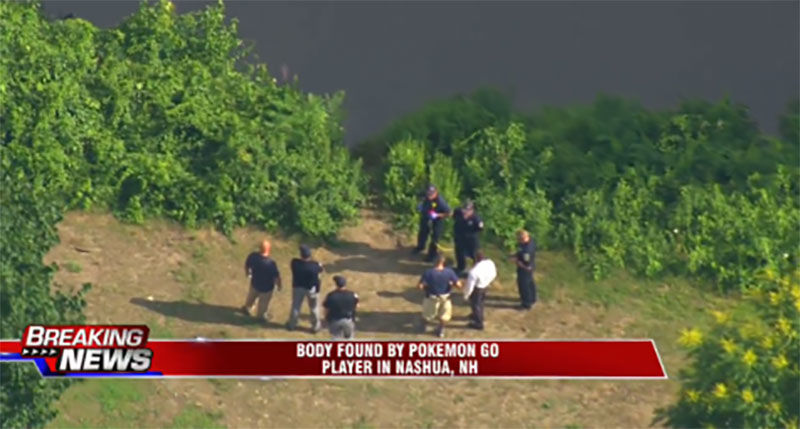 7 News in Boston reports that the body was found floating in a brook at Rotary Park in Nashua earlier today. A Pokémon Go player had made the discovery while wandering the area catching pocket monsters, with the park apparently a popular site owing to its Pokestops.

Also: check out the last line of the 7 News report:

It is unclear what caused the man’s death, and whether he was also playing Pokemon GO.
In happier “Pokémon Go players stumble into real-world events” news, the same outlet report that two players from Lowell, MA were out looking for Pikachu near some local basketball courts when “they found an unresponsive man sitting near the benches” following a drug overdose. They called 911, paramedics got there, revived the guy and he survived.

Remember the days when everyone just stayed inside not playing Pokémon Go and these things just happened? Bodies could float in creeks for days, folks would die alone on park benches, what a different world it was.

That's right, a Pokémon Go player found another dead body. This phenomenon is growing so rapidly that I didn't even know there was a first dead body until I read this article.

Just like the author of the article, I was also caught by this line:

It is unclear what caused the man’s death, and whether he was also playing Pokemon GO.

This makes me think of two things:

1. Wouldn't that just be damned weird if the deceased individual was also playing Pokémon Go when he died/was killed?

2. Are all the good Pokémon monsters programed to be found near murder scenes?

What if Pokémon Go could be exploited by a hacker that wanted to kill its gamers?

Anyways. Not sure if it's a murder yet but if it is and playing this game led to the discovery of a crime then I think that is awesome so long as nobody gets hurt in the process.

edit: Maybe the police should just start playing Pokémon Go in their spare time to be more proactive.
edit on 7/15/2016 by ColdWisdom because: (no reason given)

If you take out the Pokemon Go bit, it's just another normal story.
'man walking in woods finds dead body' - happens all the time.

I'm sure lots of dead bodies in the woods don't get found, and lots of people have completely unremarkable walks in the woods without finding dead bodies, drugs caches, or hidden archaeological finds.

in other news, The Pope takes a dump in the woods, whilst playing Pokenon Go

If it was just one dead body I would agree that it's not news. And I would agree with you for all the same reasons that you listed.

But two in one week and the game isn't even a month old yet? Statistically speaking because of those details it is very likely that it will continue to happen to gamers.

Indeed. I think this is just what happens when people actually go outside. If more people "explored" the world we lived in, then there would be a lot more interesting discoveries.

Says the one sitting behind a computer...

some people have all the luck.

If it was just one dead body I would agree that it's not news. And I would agree with you for all the same reasons that you listed.

But two in one week and the game isn't even a month old yet? Statistically speaking because of those details it is very likely that it will continue to happen to gamers.

You are aware of how popular it is, right? So countless people now out and around looking for things.......

Indeed. I think this is just what happens when people actually go outside. If more people "explored" the world we lived in, then there would be a lot more interesting discoveries.

Says the one sitting behind a computer...

Shh, it's scary/tedious as # out there. My view is good enough with 2 LED windows of the world at my desk. So long as i get a few minutes of sun and nature every month. Also, vr is coming!
edit on 15-7-2016 by Tjoran because: (no reason given)

They're out and around in the real world looking for things that exist in a virtual world. Two bodies found by people playing this game in one week.

I'll call it now and predict that discovery of dead bodies is going to become quickly known as the darker side of Pokémon Go.

I assure you VR is not coming.. it is here. I went off the deep end, you should see my rig

I would think finding dead bodies is the lighter side as the people who know the person who died have closure..

But ok lets all stay inside, instead.. LOL.

The game is more popular than twitter and it's been out about a week or so?

I think Nintendos value went up like 11 billion or some dumb crazy number like that. In like 3 days? That must be stock price and I may have that number wrong. I think it's making over 2 million per day on "in ap purchases"

It's unreal how many people are outside hunting for pokemon. I'm 30 and many of my old friends are making posts like "I was at the mall and I saw 7 other people playing pokemon go."


The only connection and it's an odd connection..
This game, this simulated reality...
Is causing massive unheard of numbers of people to go back out into real reality.

there's a joke in their somewhere, but ahh forget it, the company who made the game " Niantic" made "keyhole" (ie google maps)... HINT.. HINT..

It's funny how silly this is. I would never believe this movie if I had to sit and watch it, and yet here I am living it.
edit on 15-7-2016 by Reverbs because: (no reason given)

posted on Jul, 15 2016 @ 05:10 AM
link
I was urban exploring in a large covert when I'd pass over the bridge driving it always looked so lush and interesting down there that I decided to take an exploration of the area.

First under the bridge itself there were of course broken shards of various objects, old hypodermics and oddly discarded under garments I suppose they can serve as toilet paper in a pinch or after one... so not that shocking. After exiting from under the bridge/overpass that was basically a dried up river bed from all the dirt and sediment that never got scrapped out there were trees and over growth like it's own little oasis in the midst of all the concrete urban sprawl...

I came across an old hobo campsite there was a tarp made into a tent with a mattress bulging out of one end and wads of clothes all over and yet abandoned and over grown even some strange form of cannabis growing where it was in chain form where another leaf formation grew off of the longest leaf in sets of three or four and were in various states of flower a mutation I guess... someone told me on mention of it later "that sh-t will kill you dead" not the cannabis itself just the mutation that I found of it.

There was a little green plastic army man perched in one of the small trees next to the tarp tent that served as support for the tarp setup and shade tree as a little lookout fellow I guess... I didn't smell anything dead nor dare lift the flap as intuition said there's likely a body in there inhabiting those two saggy looking black socks sticking out with the mattress edge.

About a year later, the city cleared all of that out and paved it as a road leading to some other construction... like with most natural settings I didn't want to disturb anything just observe in interest. If there was a body under there I suppose someone found it... but I had no interest in becoming an Egyptologist that day and seeing if Tut found a new place to rest and alerting a bunch of people about it.

I'm sure all the urban and rural exploring that this app fosters will continue to turn up such things and all sorts of discoveries... pok e dead mon with a stick is optional in it I suppose, but if its a crime scene I wouldn't suggest making evidence if one doesnt want any attention of course reporting it sort of helps I suppose... I left my conscious ignorant by not lifting that flap, so ignorance can sometimes be bliss if a lie detector is involved and there were witnesses to you being at some scene you happen to innocently stumble across, I saw an out take once of someone trying to film a nature documentary on canoe fishing and there was another production of people filming an outdoor porn film that they unexpectedly encountered it was kinda humorous seeing those two worlds collide... gives new meaning to quiet on the set I suppose.

I assure you VR is not coming.. it is here. I went off the deep end, you should see my rig

Let me rephrase, When affordable vr gets here haha. I spent 2 grand upgrading my rig, waiting for the second gen goggles to come out atm.

how would it be a map to victims exactly?

Uber facebook and Tinder are much better matches for such an exploit.

Pokemon Go is hardly what I would call interactive (in it's current form) anyway.

It seems likely Google is using this as an "enhanced street view."

is here, it's just missing the totalitarian dictatorship piece. Smart move to put that in place last though.

how would it be a map to victims exactly.

i live in a cul-de-sac that backs onto a golf course and rail yards. at the end of the street is a gym thats unreachable if you dont enter a creepy little unlit reserve. stephen king fans await his new trilogy

"Shut up and keep moving! Not a word!! Over there; into those bushes...go into those bushes. Now give me your wallet/purse, watch and car keys! ... (BANG!!!)...." "Hey look!! Just found a body over here while playing Pokémon Go!!"

Nah, nothing could go wrong with this!!