Many injured in Nice, France after truck drives into crowd, reports of gunfire

People could be seen running in panic after a truck crashed into the crowd on Promenade des Anglais in Nice, France. Many people have been reportedly injured. There also have been unconfirmed reports of gunfire.

“There are people in blood, probably full of wounded,” a reporter for the Nice Matin newspaper said.


Many injured in Nice, France after truck drives into crowd, reports of gunfire

Now reports of up to 30 people dead. On the news now.

Truck drove through a crowd running over and killing dozens. People ordered to stay indoors.

Fox reporting there was a shootout between the driver and local police.
edit on 14-7-2016 by MysticPearl because: (no reason given)


Local media has dubbed the incident an act of terror, reporting at least 50 fatalities. No official confirmation has been released so far.

The Agence France-Presse (AFP) says its reporter described seeing a white van driving at high speed on to the Promenade des Anglais, which is by the beach in Nice, as people were leaving after the Bastille day celebration display.

“We saw people hit and bits of debris flying around,” he said, adding that the incident took place near the Hotel Negresco. Terrified pedestrians screamed as they fled the area. “It was absolute chaos,” he said.

A security cordon was established, closing off the central Place Massena by 11:30pm GMT, another AFP correspondent said.

The driver is reported to be dead. France 24 is saying that he was shot by the police.
edit on 14-7-2016 by ipsedixit because: (no reason given)

Extremism needs to end. This is supposed to be The Future.

Now that's a serious sort of attack. Anyone can get hold of a vehicle, and do a lot of damage. I wonder of this was a case of someone "doing their part" as some of the Muslim leaders have asked people to do. 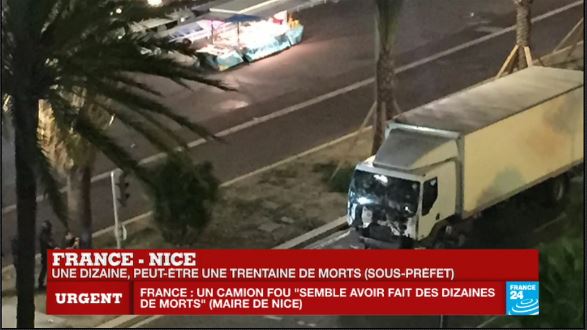 BBC is reporting that the police are in pursuit of accomplices and that shots have been fired. One person was seen escaping. 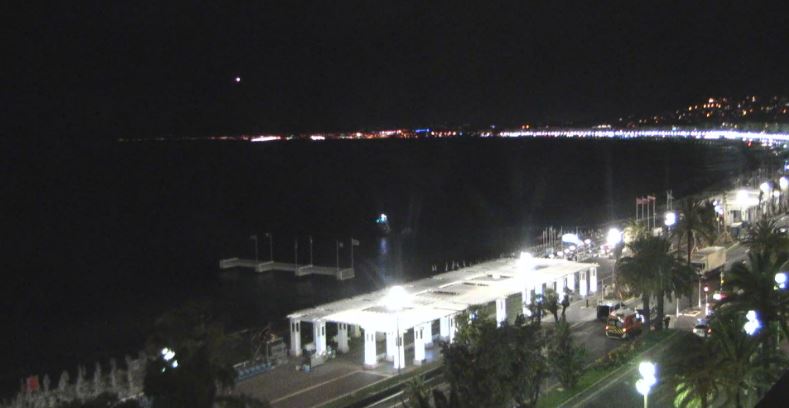 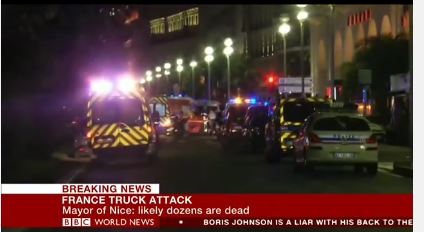 posted on Jul, 14 2016 @ 05:35 PM
link
The news crawl at the bottom of the BBC feed mentioned that shots had been fired at the crowd. This might be confusion, considering that police did shoot at the driver. 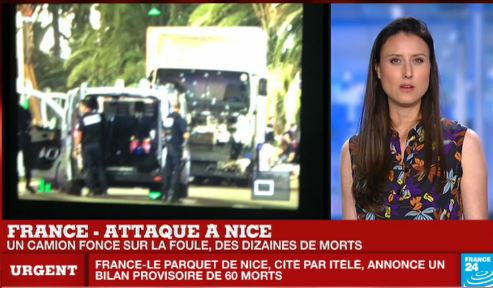 originally posted by: matafuchs
What's up at the Eiffel tower? There is a fire? Was it an attack?

Looks like a bit of a panic. French police say the smoke is because of the fireworks. There is also a building on fire across the river, but it does NOT look like terrorism.

originally posted by: CaticusMaximus
The fruits of the failed multiculturalism experiment.

I haven't heard any bulletin about that on France 24.

posted on Jul, 14 2016 @ 05:57 PM
link
The fact is Radical Islam is a clear and present danger and this will just get worse. This is because Islam isn't just a Religion it's a Government.

You have places in the Middle East that run their countries based on a Religion from the 6th Century. You can't continue to have young Arabs growing up who see the modern world as the enemy of Islam.

It's like when the Catholic Church was behind the Governments of Europe. It was chaos because Governments were trying to run their Governments based on the dictates of the Pope.

You have to do two things.

1st: You have to annihilate ISIS in brutal fashion. You have to make so brutal, people will be scared to join ISIS.

2nd: You have to meet with Saudi Arabia, Syria and other Middle Eastern Countries and you have to tell them they have to become more modern. There's too many technologies on the horizon that could kill 50,000 instead of 50 or 60 people at a time.

You either annihilate ISIS now in brutal fashion or this will just get worse.

Sadly, Obama is more worried about the American People and this fake issue of Islamaphobia than he's worried about radical Islam.

So if you take out ISIS, another group will form. You have to go to the root of the problem which is Governments in the Middle East running their Governments based on a 6th Century Religion in 2016.

I don't see the clip now. It is one of those vertical cell phone clips. I'm sure they will show it again.