page: 1
31
<<   2  3 >>
log in
join
share:
Winstonian
+9 more
posted on Jul, 10 2016 @ 05:02 PM
link
I have been researching the events that took place in Dallas non-stop. I have been reading, watching, and listening to everything that comes to light. From the start of the event, the police department, police scanners, media, and eyewitnesses all claimed that there were multiple shooters. A couple of days pass, and we arrive at the official narrative being conveniently molded into a lone wolf black supremacist shooter. Even worse, the shooter is a veteran. We already know that DHS already targets vets as terror suspects. What a simple and easy way to further that agenda. Other than the mass reports of multiple shooters, we also have the Dallas Police department stating that the rifle used was an SKS. I thought this was fishy to begin with, as the SKS comes standard with a built in 10 round magazine that can then be modified to take AK-47 rounds.

He Used An SKS

Now here is the kicker! Today images were leaked of Micah Xavier Johnson's corpse, along with a very clear image of his rifle.... AN AK-74! These two firearms take completely different rounds. The crime scene investigation is already long under way, which would include the services of ballistics/munitions experts. I find it hard to believe that they would make the "mistake" of reporting on the incorrect caliber rounds.

The images of the body and the video of the shootout that we see clearly differ. The image of the deceased clearly shows him wearing a greenish-brown pair of pants. In the shootout, the pants he is wearing are very clearly white.
youtu.be...


What do you guys think? I think that this clearly shows major that the official story is not adding up.

does look similar to 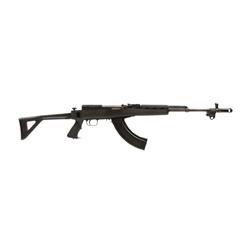 at a glance or from distance.

Doesn't look like either in that video they showed on tv.

And that site on that 'ak'.

As each day passes I keep having more doubts of the 'official' story.

Sure is a fast shooting shotgun then.

originally posted by: Shamrock6
Pants look pretty khaki to me in both the shooting video and the death pics.

I saw some death pics, and he didn't look blown to bits, if they were real.

I have been researching the events that took place in Dallas non-stop. I have been reading, watching, and listening to everything that comes to light.


From your basement behind a keyboard?

Oh good, internet 'forensics'. Mix with the thousand others that do that and you get constipated stew.

Don't you remember preschool? "IN 1492, Columbus Sailed The Ocean Blue"
Everyone follow along now, this is history we're teaching.


The victors write history- news is just a story written by those with the biggest pen.

Keep digging, but good luck finding evidence of any truth- the data has all been fabricated.

posted on Jul, 10 2016 @ 06:04 PM
link
Well I have seen another video that does clearly identify sniper rounds by audio, at the same time as the SKS gun which seemed to have explosive rounds, at the time of the policeman seen getting killed by the shooter on the ground, even with all the reverberation going on because of the buildings, which can fool you into thinking multiple shooters. But there were also a load of police around the corner, so it's more than likely they were shooting too, but did they have a target?
There is also the problem of media reports saying that there were suspects under arrest, and that they weren't talking...did media make that up?

See what you think anyway.

I have been researching the events that took place in Dallas non-stop. I have been reading, watching, and listening to everything that comes to light.


From your basement behind a keyboard?

Oh good, internet 'forensics'. Mix with the thousand others that do that and you get constipated stew.

I'm sure plenty of "reveals" have come from Internet research..

That said deciding that the differences between the initial reports, which the media throws out with little or no verification and the actual facts revealed after the fact are proof of a conspiracy is pretty flipping thin....


How have all those other black flag operations attempting to push gun control worked out??


What absolutely no new gun laws?!?

Most likely a .30 caliber armor penetrating round. Passed through and through body armor, showering sparks and concrete dust on the other side.

I'm sure plenty of "reveals" have come from Internet research..

Sure it does, especially to us. We are talking about official police reports and official statements given by the Dallas director of the department of homeland security, who would not comment if they did not have evidence of an SKS.

How do the police answer if they do not have the answer at a press release?

"I cannot comment as there is still an ongoing investigation."

It's very simple. Police personnel are just like us. Human. That means they can make mistakes, just like the rest of us. Maybe when it was found there wasn't anyone there who knew what it really was, but remembered what an SKS looked like and the ak-74 does resemble one. It wasn't till later, when it was examined by a professional on rifles, that it was found to be what it was.

Your post was made in a very condescending, holier than thou, and better than you manner.

You should work for the federal government, you would fit right in.

They do. We will see what comes out over the next few days. I am not claiming to know everything.

My guess? They are going to claim to have found an SKS in his home, and an AK-74 at the site. Or they will claim that he used a couple of different rifles and dropped them later as he moved through the streets.

How long you been around. Going back to Sandy Hook, The Colorado movie theatre, 911, Desert Storm, Vietnam, Korea?

Seen it all before, only young uns believe the main stream spew.

TinfoilTP
+6 more
posted on Jul, 10 2016 @ 06:26 PM
link
The only question I have is the police description of a triangulated attack on them in the area as it was happening. How could one person get to 3 different buildings at high level, not get seen doing so, and get all them shots off to make it seem like a triangulated attack?