posted on Jul, 9 2016 @ 07:52 AM
link
Just as Curiosity was looking like getting-up steam and heading through the Murray Buttes, an anomoly occurs and forces MSL to enter "safe mode". As the U.S. Geological Survey, Astrogeological Science Center blog post by MSL Co-Investigator, Ken Herkenhoff states:

Early on Sol 1389, the rover experienced a "safe mode event" (SME), apparently due to a software problem that is still not fully understood. So the 3-sol plan did not execute but the rover and all subsystems are healthy. Science planning has been suspended while critical engineering data are returned to Earth and studied by software experts at JPL. I'm SOWG Chair again today, with not much to do because of the anomaly, but I'm anxiously following the tactical team's progress in recovering from safe mode.

Now, an SME for a rover or any other space craft is not hugely unusual. The vehicles have in-built mechanisms to properly handle anomolous events that cause software problems and ensure a safe management of the problem, whatever it may be.

What is strange about this latest SME aboard Curiosity is that even Science Operations Working Group (SOWG) Chair Ken Herkenhoff does not have a clear understanding of the problem. His use of the wording "apparently due to a software problem that is still not fully understood" implies that the MSL team believe there is a software problem, and that it is not very well understood.

The hypothecated problem, to my understanding (the one being offered by the investigation team) is of a software mismatch between what the MastCam readings are and what the internal on-board data predicts it should be. That is the unofficial, official theory at the moment. We have had similar exploration of theories regading MSL safe mode events. One that comes to mind is when Curiosity's laser pointed at a distant object resulted in vastly differing distance conclusions than the software model predicted. That was more-or-less resolved by ... ignoring the anomolous data.

So Curiosity became way-laid just as we were becoming excited. As ever, we take a look around.

Here is one picture taken moments before the SME:

Here is the same image: 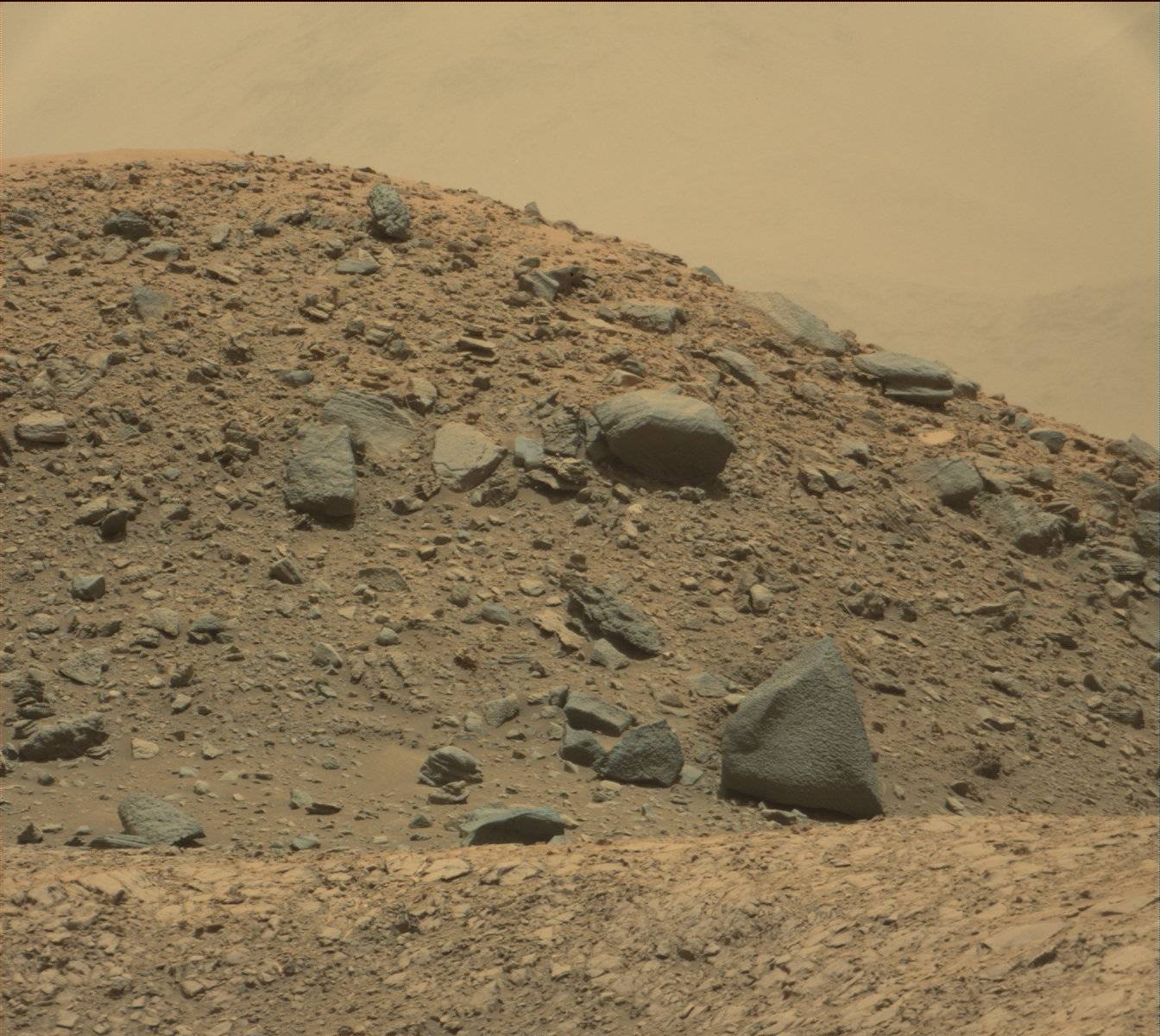 Our attention was immediately drawn to rock to the left. We took a closer look and were a bit surprised: 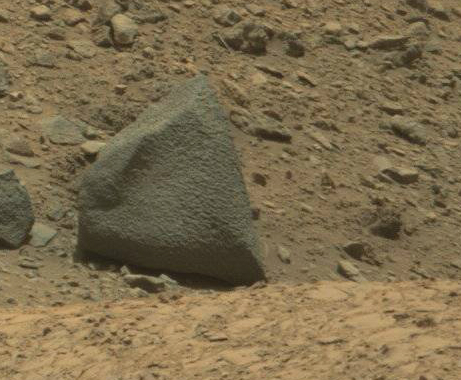 Here is the annotated image: 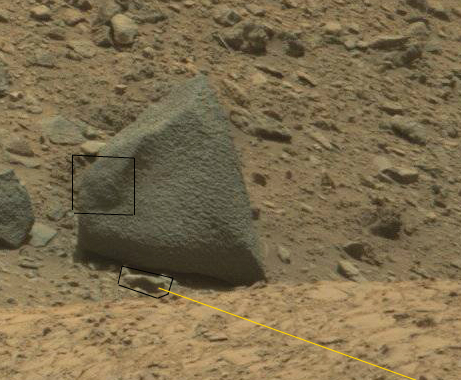 We note two things about the rock/area of the rock:

1. there is an object directly in front of the rock, and
2. there appears to be a face in the rock.

If Curiosity has crossed this ray, we may have an explanation for the SME. We are unsure of what the ray is, as obviously different energy types have different affects upon metal structures, computer parts, and specifically upon data. It is possible that the "ray", which we think hit one or two rover wheels (the closest and its opposite on the other side of the vehicle) or steering mechanisms sent an alpha particle pulse into MSL proper, causing a DRAM failure (this is discussed here in detail, vis-a-vis DRAM problems in general. Curiosity has multiple RAM types to handle mission needs:

The computer contains special memory to tolerate the extreme radiation environment from space and to safeguard against power-off cycles so the programs and data will remain and will not accidentally erase when the rover shuts down at night. On-board memory includes 256MB of DRAM and 2 GB of Flash Memory both with error detection and correction and 256kB of EEPROM. This onboard memory is roughly 8 times as capable as the one onboard the Mars Exploration Rovers.

Apart from the energy beam zapper device thing sitting on the ground next to the rock,
if we take a look at the rock we get a surprise: what looks like a face. That may be simply pareidolia, but hey, what can we say. If you see it you see it and cannot be un-seen.

Hopefully the MSL team can get Curiosity up and running soon, and maybe even taker a look at the device closely, and maybe even locate another one like it, or somehow connected to it.

I don't intent to sound hostile but, is this a joke?


However hard i try i do not see a face in this rock and the "object" in front of it appears to be yet another rock and behind it under the big rock you see smaller rocks. I have no idea how to make a razor or laser measurement device from that either.


Maybe if you draw out the supposed face?

...since we are on random faces:

Who else sees the Ferengi head partially buried, just to the left of the rock "face"?

Maybe the rover hasn't suffered a technical glitch but has gone dark because they want to investigate building rubble discovered in one of the final images. 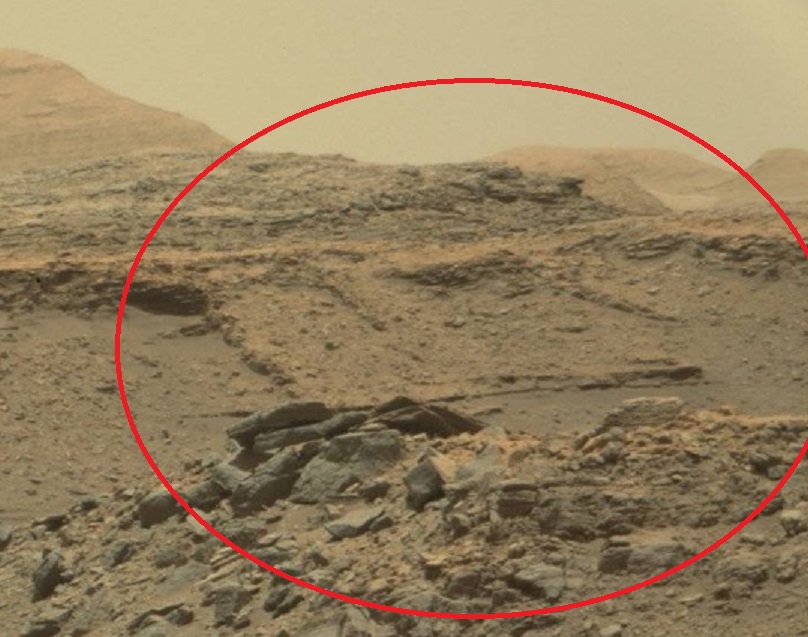 
Is it utterly impossible that E.T. came along and shot that rock with a laser? No.

Is it improbably that E.T. came along and shot that rock with a laser? Yes.

I do my damnedest to keep an open mind. I really do. I don't discard things because of their source...because I genuinely believe that by immediately turning a blind eye to a source you potentially eliminate the one truthful thing thing that source ever uttered.

Now, honestly....were I to see that this was something happening on a somewhat regular occurrence in rocks that have been observed.... I might be more inclined to accept the thought of this being case.

But one rock...happens to have what appears to be a straight cut to it....

edit on 9-7-2016 by nullafides because: Duplicate post caused by...you guessed it....SQUIRRELS with frickin LASERS on MARS!!!!

Hey , wait. That is the start of the foundation for my super secret getaway location. Now you have done it. Released it to the entire ATS population 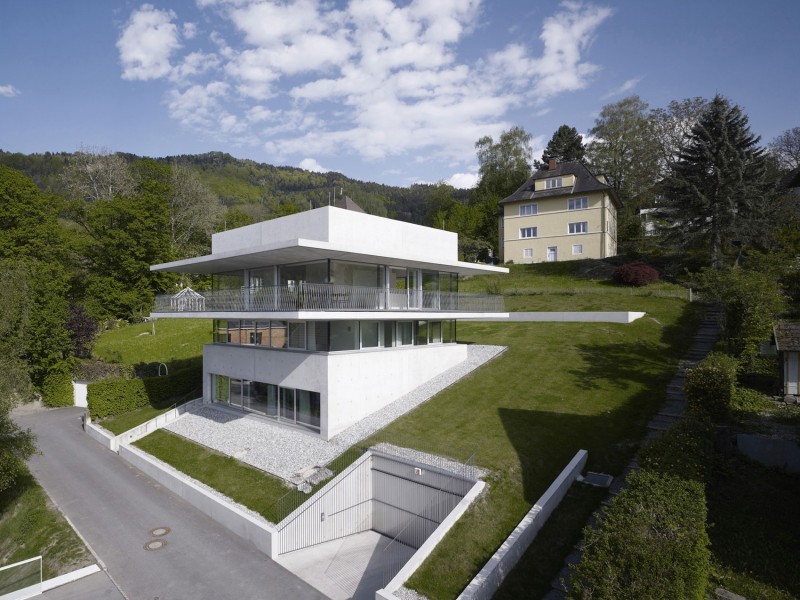 originally posted by: gortex
a reply to: Babushka

Maybe the rover hasn't suffered a technical glitch but has gone dark because they want to investigate building rubble discovered in one of the final images.

When you look at all those crumbling hills, and disintegrating rocks everywhere, you can't help but wonder what the future for Mars will be, in billions of years just a dustbag, until the dust itself starts to peter out into space, then there is nothing.

Geology is different on Mars. Layers of bedrock, blasted and fractured into seeming artificially constructed wall foundations... they are everywhere.

The focus is on small parts of a crater rim, since we can't go there to confirm, however...

m onument valley
edit on 9-7-2016 by intrptr because: fixed link

When the Sun turns into a Red Giant in 5 or so billion years we will all be as dust mate.

originally posted by: gortex
a reply to: smurfy

When the Sun turns into a Red Giant in 5 or so billion years we will all be as dust mate.

I have one thing to say, get a life and take your inane trolling to another thread that may be open to your blinkered little existence. Skunk Works is the thread where folk can be expected to make posts with outlandish content. AS ATS says:

a dedicated place for ATS members to engage in speculative conspiracy theory discussions of all topics, angles, and targets.

I seriously suggest you read that thread. You may realise that being "unhelpful" is not what this forum is designed for.

And, welcome to ATS

irrespective of that, you're doing exactly what Babushka accused others of doing, namely trolling...Does it feel good?