Toronto! Can'tcha Do SOMETHING Right?

posted on Jul, 9 2016 @ 07:27 AM
link
Toronto is going to change the streetlights in the city to LED lights that favor the blue end of the spectrum. There are aesthetic and health related reasons why this should not be done. They are detailed in the following video:

I am an artist who has done numerous paintings of our city. I love the neighborhoods and parks of Toronto. There is a little park near where I live that is quite charming but the effect of it on anyone passing has been marred by the installation of a telephone terminal box of a considerable size right in the middle of the field of view of this park. I don't see any reason why this installation could not have been placed at either side of the park.

I fumed about this for months and finally accepted it.

Then, as if gravitationally attracted, a garbage recycling unit was installed right next to the telephone terminal, further marring and obscuring the view of the park.

I really began to boil.

This was on top of the switch from the blue shirts the police department used to wear, over to storm trooper black. I didn't like that either.

And then you have the endless wrangle over the transit system.

Just build something dammit! Even if it is a ridiculous boondoggle that provides some relief to the Yonge line. Build another Yonge line right beside the first one! Have some class. Have some character. Be unique and silly and quirky. Be Barcelona. Be something! Do something!

Have some common sense for once. Use the amber LEDs that are used in Quebec and which experts tell us are the perfect choice both aesthetically and for health reasons.

Wake up and get sharp Toronto. People are really fed up.
edit on 9-7-2016 by ipsedixit because: (no reason given)

posted on Jul, 9 2016 @ 07:41 AM
link
I feel for ya. The little town I live has triple globe street lights that give off a soft orange- ish glow, that is easy to see by, but doesn't give off that harsh light that LEDs do. On a foggy night, it gives a cozy/mysterious air to the night and that's my favorite time to go out walking.

Whoa! That picture was too big to post. Just take my word they're beautiful lights.
edit on 9-7-2016 by DAVID64 because: (no reason given)

Very nice. I think we have some of those along the boardwalk by the lake in Toronto. Toronto is a great place but there doesn't seem to be a banana peel that the local authorities can locate before it trips them up.

There are globe lights on the "Baldwin Steps" near Casa Loma, although the bulbs in them seem very "cool" to me. It's the bulbs that make the difference.

Here's one of my paintings of that location. 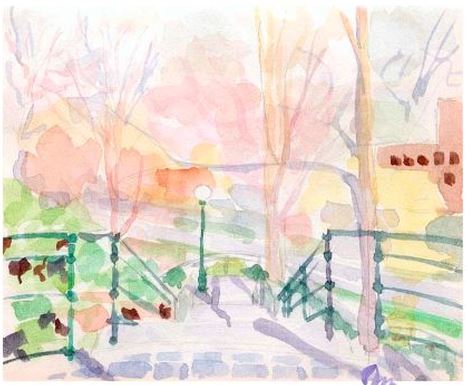 I think a lot of cities are in the process of changing over to LED lights. It is the wave of the future. The bottom line is, when it comes to managing a city's budget, saving money wins out every time. You may not like the aesthetics, but if the majority of residents don't care, it's a done deal. Since when does government care about the health risks associated with new technology if it saves them money? State regulators could also require the reduction of heavy metals in LED's.

On a more positive side, researchers are working on new lighting technologies that could also render LED's obsolete.

OLEDs are beginning to be used in TVs and cell-phone displays, and big names like Siemens and Philips are throwing their weight behind the technology to make it a lighting source as well. The OLED printer was made by General Electric Co. on its sprawling research campus here in upstate New York. It's not far from where a GE physicist figured out a practical way to use tungsten metal as the filament in a regular light bulb. That's still used today, nearly a century later.

Plastic Film Can Make House Lights Obsolete.
edit on 9-7-2016 by WeRpeons because: (no reason given)

posted on Jul, 9 2016 @ 02:11 PM
link
I can't understand why they don't fit sensors to the street lights so as when someone walks down the street 2 or 3 lights come on in front of you and last a certain time on a timer after you have past so if there is no-one to trigger the sensor no lights come on therefore saving on power.

Because that would cost too much to implement. Whereas they don`t mind paying someone to change a light bulb.