Anyone into swords and swordplay?

posted on Jul, 9 2016 @ 11:51 AM
link
I train with a group who uses custom aircraft aluminum swords of all types from around the world. We are mostly not traditional at all. For some it is about dressing in the traditional old style clothing and calling each other lords and ladies. I don't knock them because anyone who takes a Thing serious deserves respect. Especially in the fighting disciplines.

Our fighting is meant to be intense and dirty. No rules and no time limits. But this doesn't mean that we don't have the utmost respect for each other and those that practice.

Great looking weapons, my friend. I'm half way around the world otherwise I'd ask to come watch.

originally posted by: WARMACHlNE
im into swords and knives too love chiese and Japanese weapons the best

posted on Jul, 10 2016 @ 01:16 AM
link
a reply to: TheKnightofDoom
Wouldn't know what you would do with horses and swords. But I don't think the horses would go along with it if they knew, or if there invisible horses or not.

But on the whole thing of knights sword fighting, was just watching this some weeks ago. Apparently its a thing, in Russia, on MMA fight cards, who knew! They were whacking each other in full armor with blunt swords for a while, looked dead tired by the end of the fight. Cant be easy carrying all that extra weight in armor.

And then there is this, in Japan, looks like they made there own armor and everything in some cases. Some people just have to much fun I suppose.

There are actually a lot of this sort of stuff out there, more then I would think. But however my favorite knights and sword fight of all time has got to be this one hands down, no contest, literally. 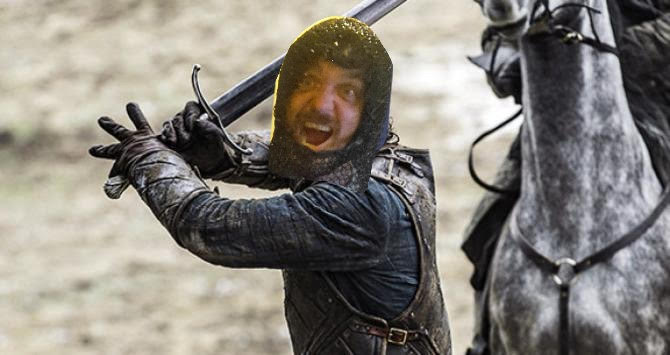 This one looks like I'm doing something rude to the hound lol. 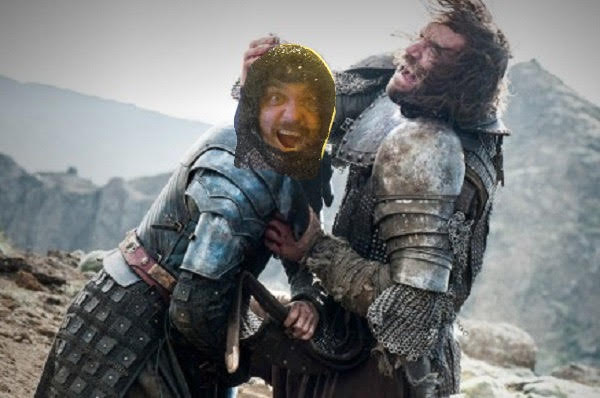 We just always quote that If we get a knock or something "Tis but a flesh wound" lol.
Once we have all gotten enough armour (bought or made) we are going to attempt full contact but I dunno I may let the younger chaps do that.

Those are bad ass!

what do they weigh?

I always figured You'd have to be a crusher to swing a long sword...

Oddly enough the one hander is hard to swing about one handed because with the Longsword you are gripping it twohanded spreading the weight.

It looks like fun. Knowing my luck a cop would come by and I'd go bye bye.

Oddly enough the one hander is hard to swing about one handed because with the Longsword you are gripping it twohanded spreading the weight.

Never held a real sword though

This guy has been a God send and amongst others got us all into the sport.

I do a routine for 30 mins a day and blimey my forearms are bulking up.


Whedn I got my first sword I ran around telling everyone "I have the POWER!" and knighting everyone even my Cat Ser Jakey.
edit on 10-7-2016 by TheKnightofDoom because: (no reason given)

posted on Jul, 10 2016 @ 03:18 AM
link
a reply to: TheKnightofDoom
Well if your going to be playing wack a mole with a piece of steel, even if it is blunt, it can still possibly cause more then a bruise, even in full armor. If anything you could try it out with wooden swords, or just put foam wrap around your swords a few times to get a feel for it.

Also walking around in a clunky chunky armor makes you slow, and when you get hit in those parts not fully protected its bound to sting, but it sure beats being dead if the weapons were not just for show, if you know what I am saying. Oh! And having a bucket on your head, may make it a very good and very big target for those who want to play ring a ding dong.

Either way if thats you in those head pictures above. Then! Your having to much dam fun anyways.

But what I really think is that withing half a minute more then half of you if not all will be panting and trying to catch your breath like you ran miles. So it should not be to dangerous, you would be out of strength and breath long before it becomes to dangerous.

It's sure getting me fit.
Let me take some pics of me shield I'm half way through making.

posted on Jul, 10 2016 @ 03:27 AM
link
a reply to: Skid Mark
Dammit! Its to bad I dont have any time and to dam tired most days, what with work and everything, or I would so need to get me some armor and start bashing dudes in with a big hunk of a piece of steal. I would so totally own all them chumps. Hell even a wooden pole or sword would be to much fun.

posted on Jul, 10 2016 @ 03:34 AM
link
Here is my work in progress.
It is painted like that to give colour behind the white linen I will put on then another layer of cream linen with my designs painted on that.
The straps need to be larger and I will put a boarder of black padded leather.
Feels good in the hand though.
Oh I have curved it and it is made from 2xPly 5mm thick glued together. 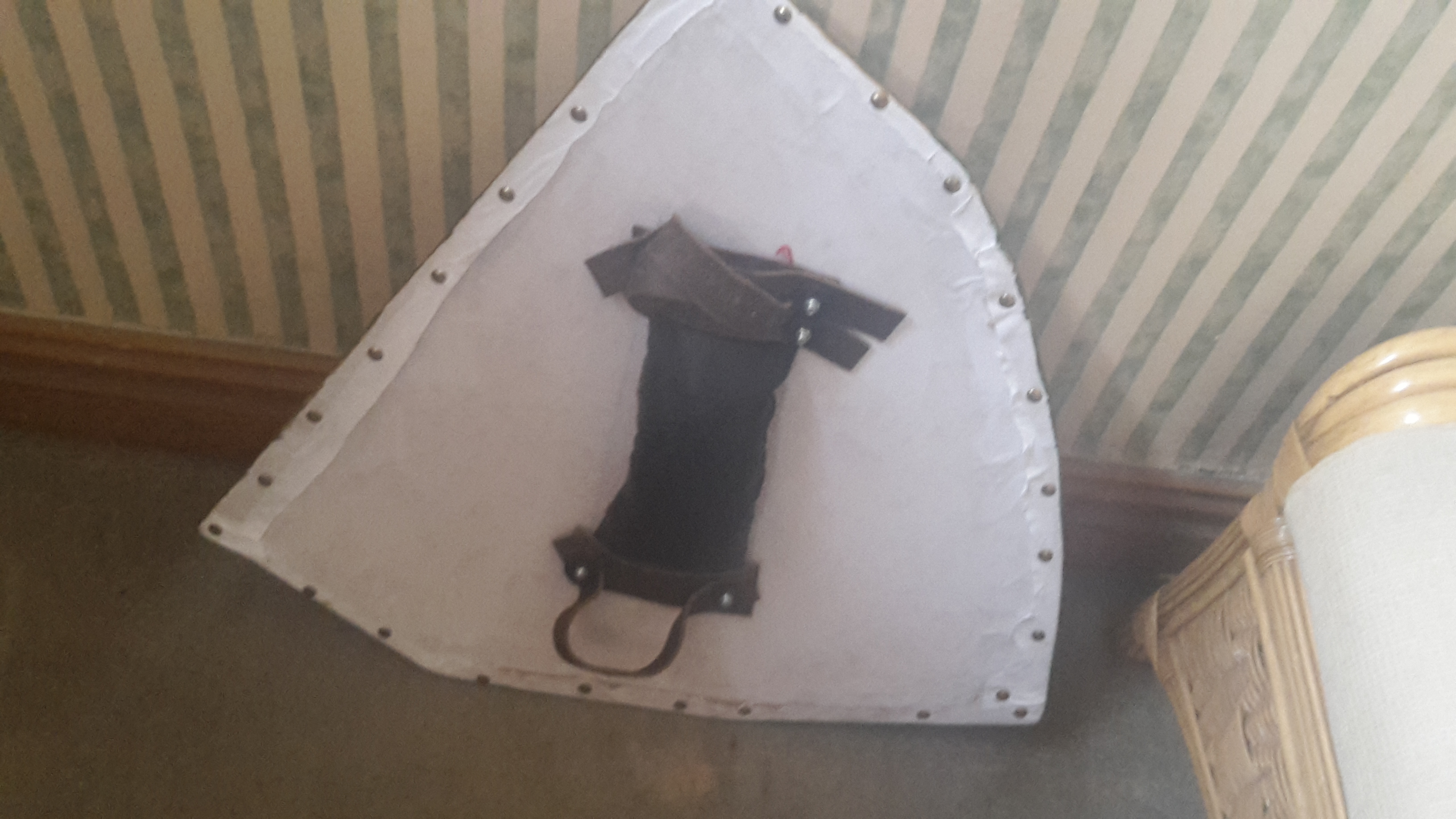 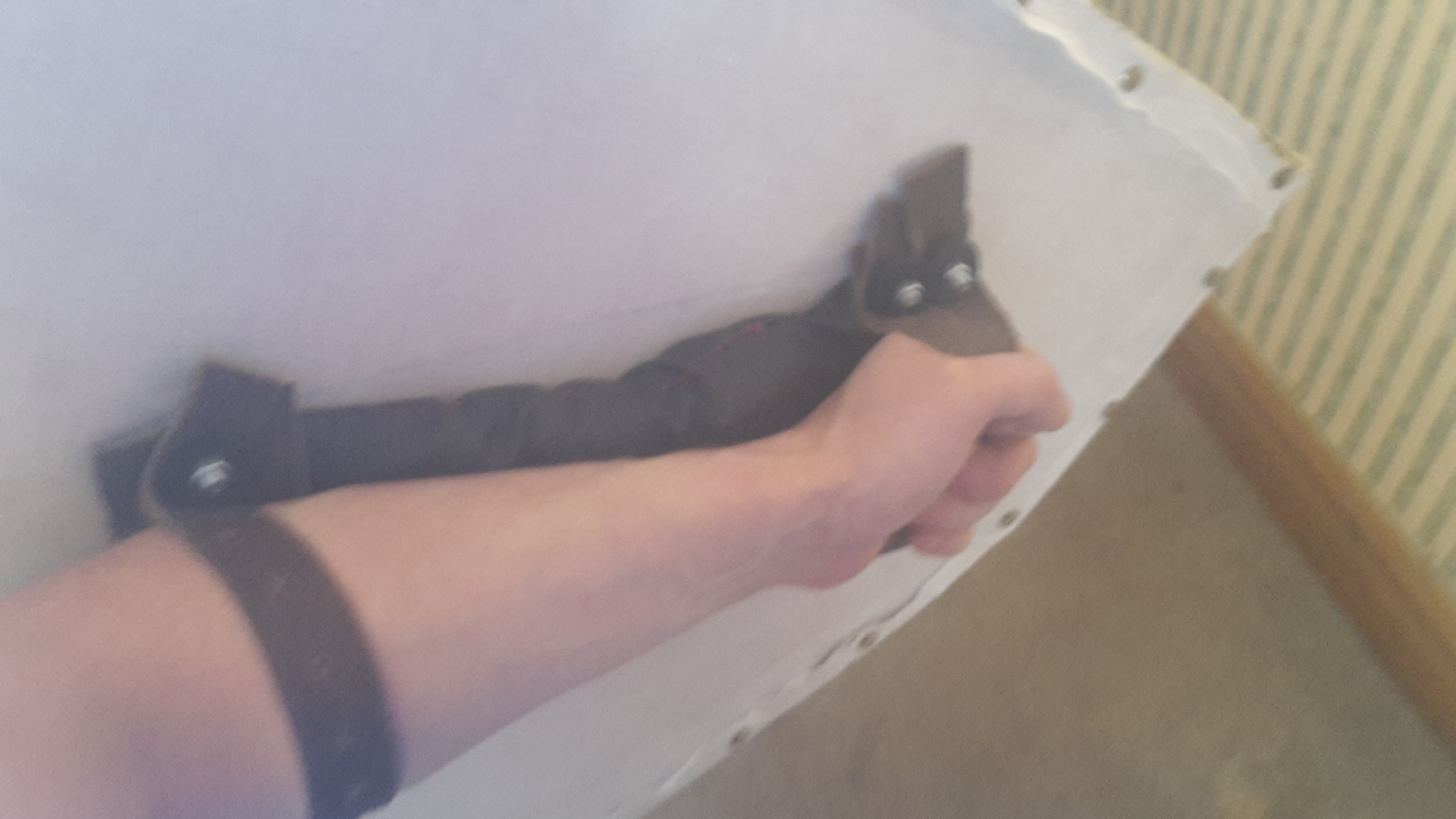 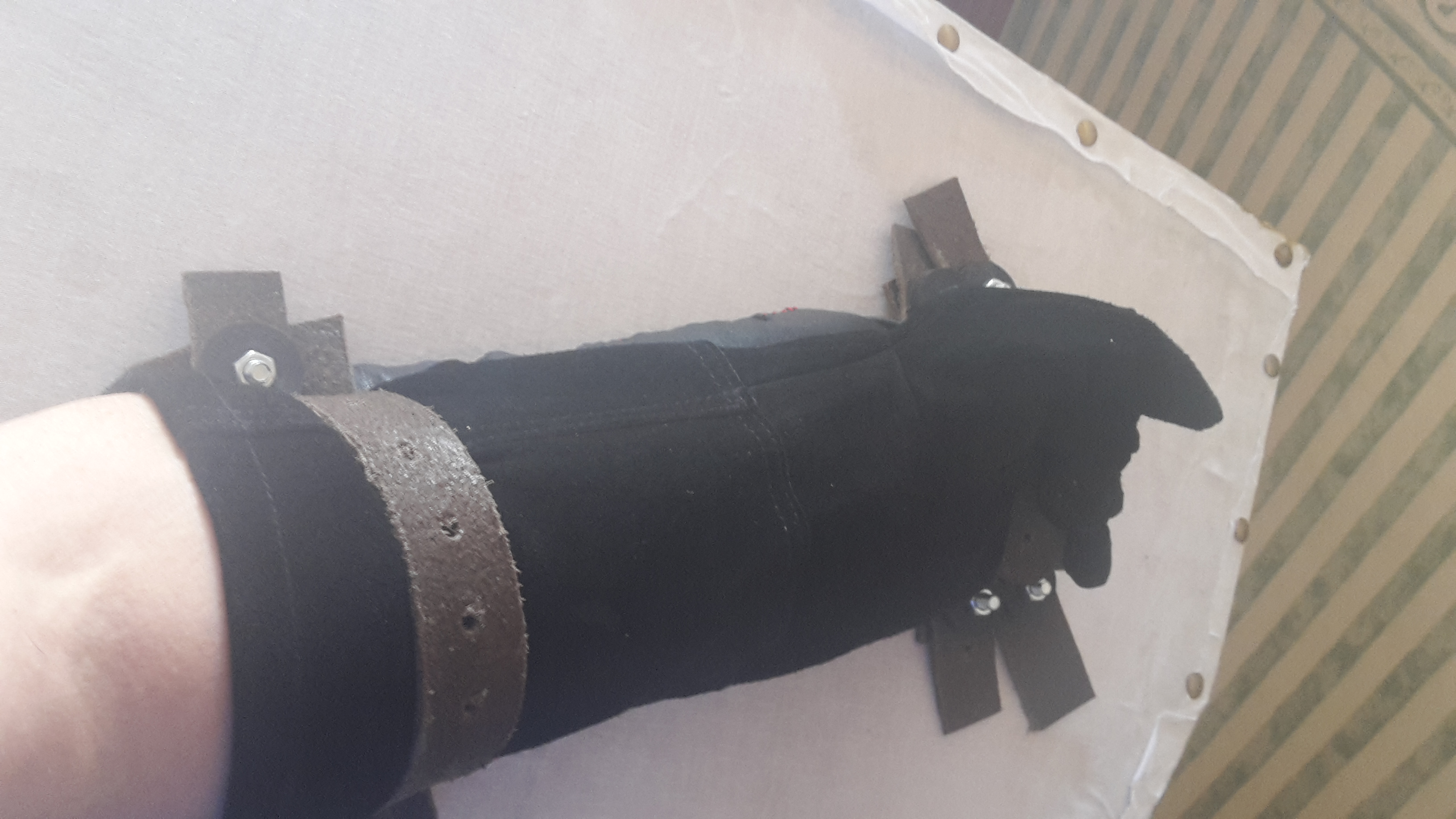 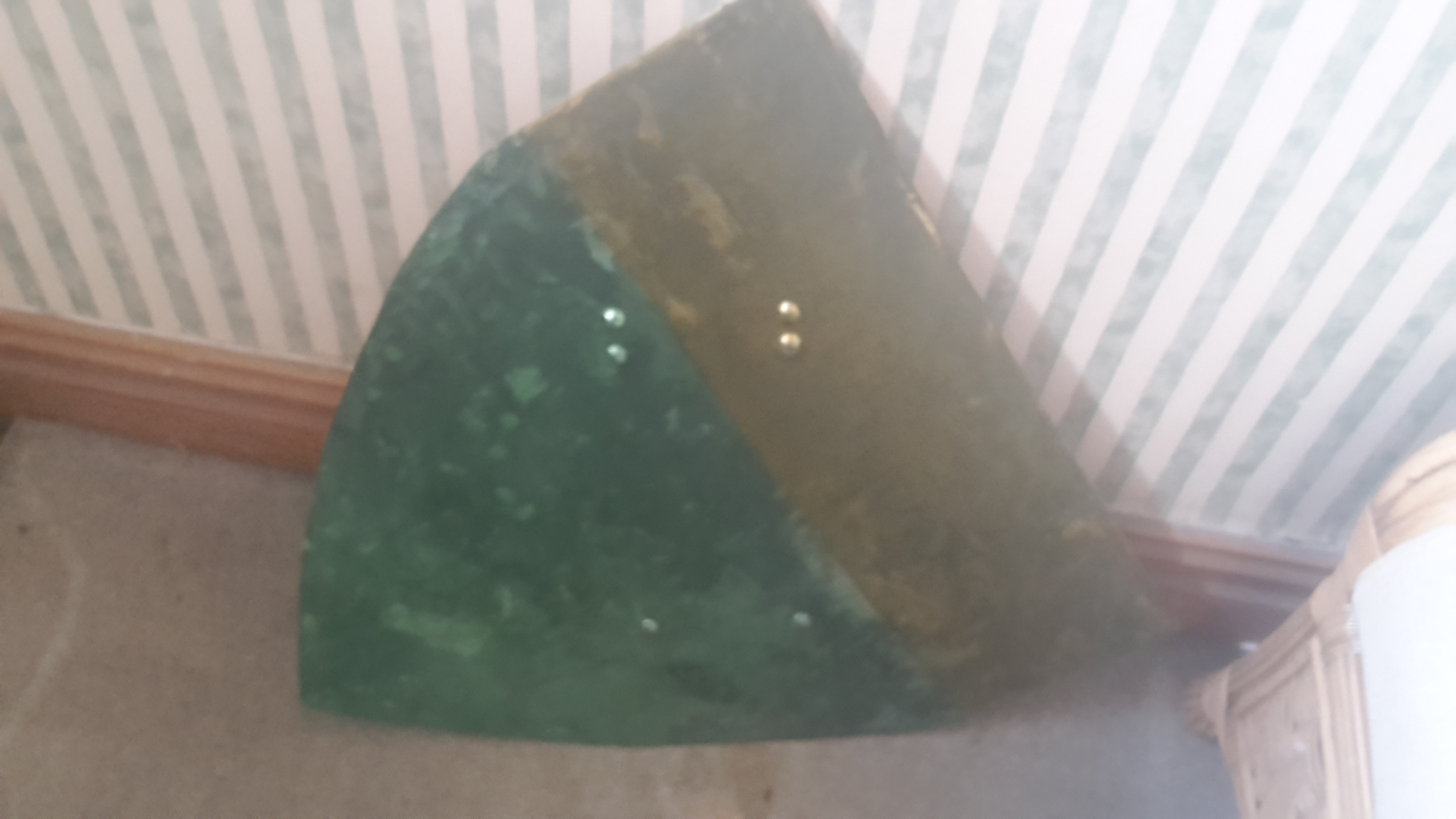 Oh and we all figured whats the point using wooden swords to train the weight feel of them will be wrong plus I think we have more respect for them and act a little safer with them.
Yeah even blunt I could take someone head half off lol.
Plus it's the feel of steel on steel and the sounds it makes....I'm such a man child . 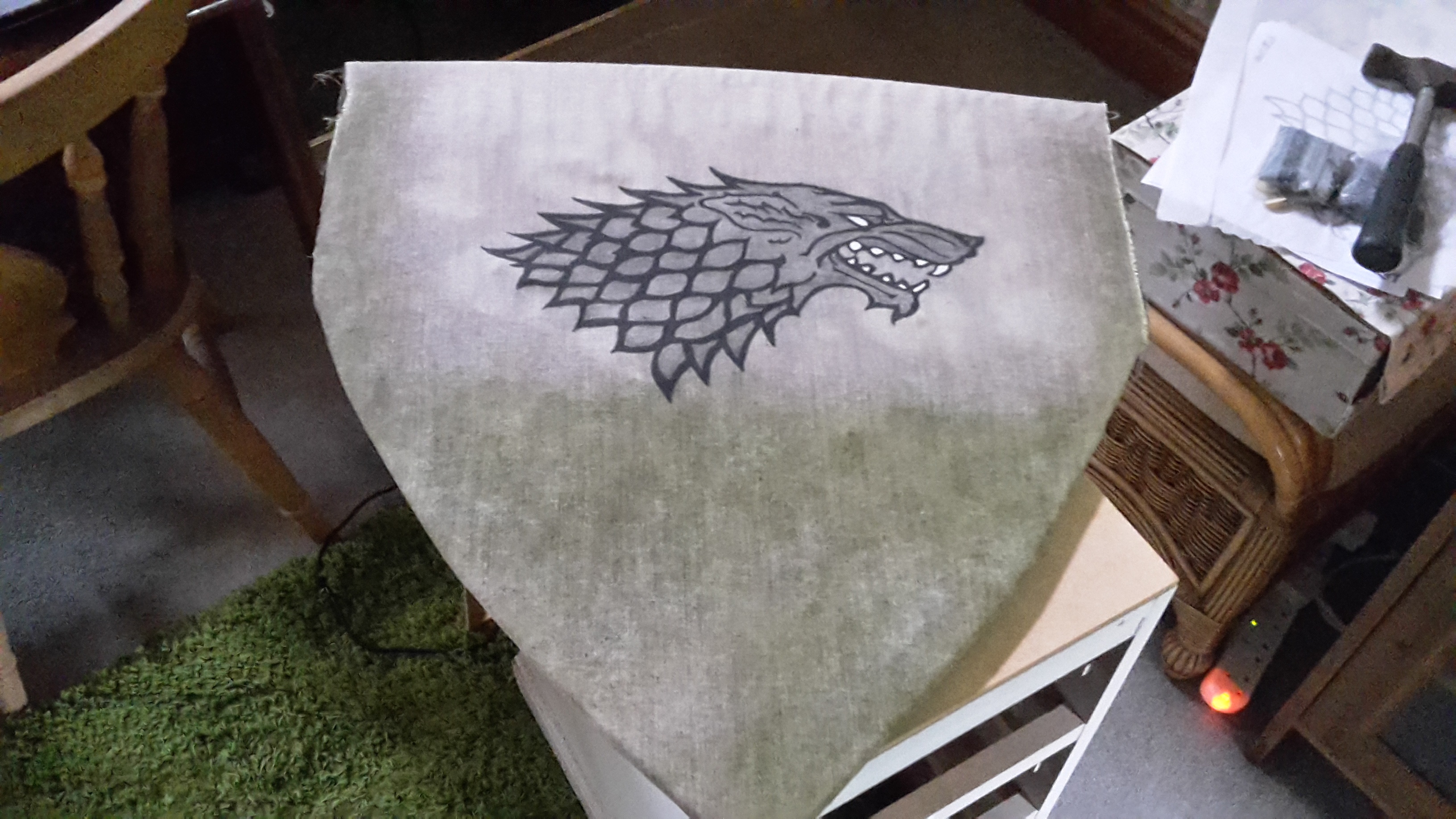 posted on Jul, 19 2016 @ 06:28 AM
link
a reply to: TheKnightofDoom
You could do a number with a wooden sword that's for sure, even against an armored opponent, and a blunt sword can do more then leave bruises. But you all can do as you like, oh and nice shield by the way.

You know I cant really recall when they actually used a shield in the Game of Thrones show. Almost seems like they don't exist in that universe or at least never seen a stark use them in the show, direwolf emblem and all. This guy I seen some of his vids before but never really bothered to watch, he has a pretty cool channel.

Ya I know, were the freak are the shields? But whatever, you know its high fantasy when Jon Snow full on runs up on an army with hundreds of archers aiming for him and somehow they all miss. Truly some fantasy right there, dragons could be probable, however all those archers missing from that range...Ya! Dont think so, you could blindfold them all tell them the range and to direction and to shoot and chances are one of those arrows will find a mark...Also why the hell did he not take a shield with him or for any of his ragtag army...High fantasy indeed.

Also another vid which linked me from the other guys vid you posted on this thread. I never really thought why anybody would use those handheld shields, I know they were popular for a period of time even have manuscripts on it, and plenty of art of people actually fighting with those big handheld shields, vikings for one. Never realized there advantage or never much thought on it though over the forearm shields, till I seen this vid. That way of fighting can be in some situations much more effective as you can stay covered while you strike.

Going off into the wood later to make a rather silly short movie.
Got a minion coming to help and about a gallon of fake blood.....make a fire and taking many many beers .

I have made a training dummy and Have been watching Roland amongst others. There is a small but dedicated community on you tube I follow about ten of them all good info. 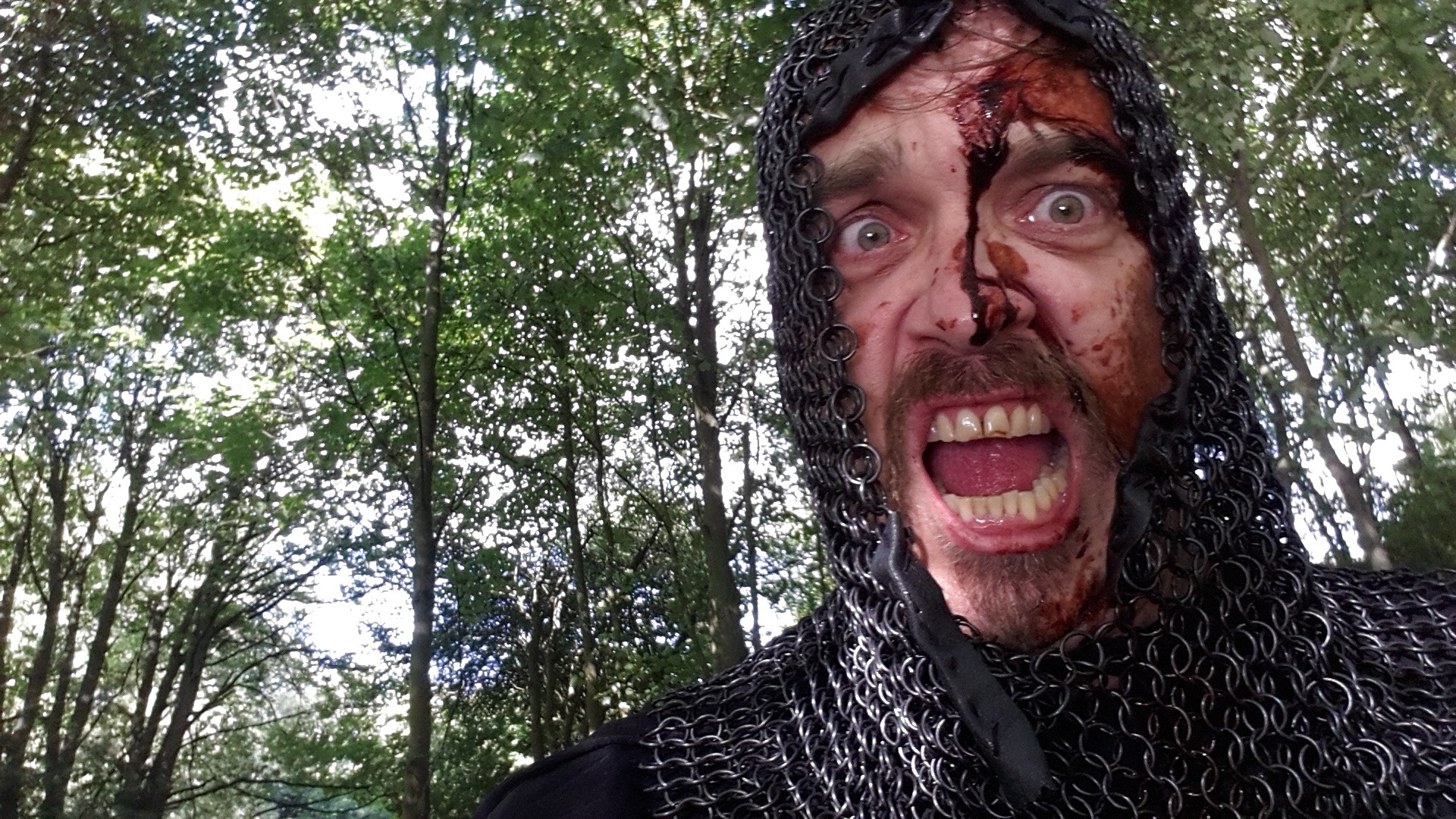 So drunk had a lot of fun making a little movie got to learn how to put it together now?.