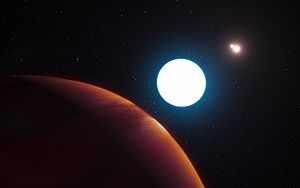 Located in the constellation Centaurus.

And by young I mean 16 million years old.

It is also very large!

This is not the first planet to be found with three suns, but HD 131399Ab’s enormously wide orbit makes it unlike any other known world. The planet, which if four times the size of Jupiter, is 82 astronomical units (the distance between Earth and the Sun) from its primary star, and 300–400 astronomical units from the other two.

An orbit takes 550 years and during the first part it is experiencing three sunsets/sunrises. During the second part of the orbit it is in constant and perpetual sunlight!

I included this video creation because the dance of the planet around its stars and they to it is very beautiful to me.

Very cool thread Chirp. I want to time travel over there!

That is a long time between sunsets ×3 !

Then again you could get a lot done more cheaply ...

Cool Thread Bird! Ahhh, the wonders of This Universe never cease to amaze Me!

It would be hard to live with a constant sunlight. I can't sleep now in the dark. Lol

I assume this is a gas giant, I wonder if there are anymore rocky, Earth types in the neighborhood? Perhaps someday we will know 320 LY is just around the block?