posted on Jul, 8 2016 @ 08:51 AM
link
a reply to: Autorico
Whatever you do make sure you never watch him. Too much exposure may result in you thinking all gay guys are twats.

You left out vegan Atheist.

I doubt it. I'm not really someone who makes sweeping generalizations.

Was thinking more judge rinder from the UK. He would make the villains submit with his stereotypical, flamboyant gay style.

No he must be a villian (Judge Rinder is our version of judge Judy he is also Benedict Cumberbatchs best man).

Perhaps, sometime, I could introduce you to the concept of hyperbole.

And you need to understand we see your Freudian slips...a lot.

would it be possible to introduce you to the concept of intulectualy honesty ?

Slips or premeditated tweaking of, poking at biased readers?

Honesty of any time is evidently a dying concept and phenomenon.

Evidently, so is personal insight.

Those who have lived with me long periods of time characterize mine as in the 3rd sd above the mean.

I just got off the special Masonic hotline with Disney, they are going to remake Return of the Jedi with all gay Ewoks.

The casting starts now, please send me your audition tape.

In which case you'd have to change that to 'the castration starts now'. please send me your audition tape.

posted on Jul, 8 2016 @ 02:23 PM
link
The OP's suggestion would be interesting.
I won't shout "homophobia" because overt homosexuality is written out of a film or franchise, but I find polemical opening posts always allow for wide and great responses.

A "Queer studies'" reading of the Bond films and books would certainly make for an interesting thesis, because here the author looks for moments that deviate from heteronormativity.
This could include moments of sexual tension, homoeroticism, gender inversion (including characters who behave or fulfill roles of the opposite gender - which usually has a "camp" effect), as well as fetishism and sado-masochism.

I'm not an expert on the Bond franchise, and lost interest when it became a marketing and special effect spectacle.
As a bisexual male I find something doesn't have to be overtly "gay" or "lesbian" to have queer moments.

Then there's more than one "gay" taste.
The The Walking Dead had a same-sex male couple, which I found rather boring and soppy.
The rugged male characters (I think Rick and his erstwhile colleague Shane) and their feverish jealousy mediated by Rick's wife (although, who was jealous of whom, in my reading of their descending madness and hate for each other) was far more compelling and fascinating.
So the anticipated openly gay couple were uninspiring and disappointing to me, or at least secondary to the other male relationships.
I'd hate to see that happen in Bond.

True Blood did much better, although once again it was the bisexual moments and fantasies between the nominally non-gay characters that were the most entertaining.

There's lots of possible subtexts to explore, especially in the spy genre, especially as homosexuality was illegal in the UK until the late 1960's, which didn't mean people didn't write about it (and there was homosexuality and fears of outing in espionage), it was just hidden and very wink, wink.
As in Ben-Hur (with its famous homoerotic subplot of raging jealousy inspired by Gore Vidal) it's often the only explanation why buddies suddenly turn on each other - the one cannot posses the other, or even profess his love without undermining his own social stature and "straight" identity.

So yeah, I'd encourage a queer fan to do a queer reading or dissertation of the James Bond franchise.
And in future it could be a wider debate on what makes gay or bisexual depictions in cinema rock or not.
Historically it's often been the subtext of the spurned and bitter villain.
I think Mike Myers already did a great send-up of the sadistic villain as "Dr. Evil".
Comedy spoofs seem to recognize a lot of this, although I haven't seen a good Bond one lately.

I recall one torture scene from a more recent Bond flick that includes a chair and a rope.
It's perhaps so hardcore that only a fetish subculture would recognize it as sexual, but wow, I almost gagged on my popcorn that this scene was included in mainstream cinema.
So there are moments, and I don't think they're accidental ...

Well, clearly the marketing (from cars to watches) seems to appeal to a wide male audience - including those who admire the intended heterosexual hero, and those who recognize that cinema gave queer men the opportunity to stare at other men without censure (which makes it inherently queer), and know where to read between the lines. Perhaps it's just my age, but too open can also be witless and boring. We don't want a "Stepford Bond" either way.
edit on 8-7-2016 by halfoldman because: (no reason given)

originally posted by: secretboss
In EVERY single James Bond movie made so far, Bond is a straight guy who has sex with hot straight women.


I am just going to assume this is a troll thread but, in case it is not, I want to respond.

First of all, all fiction has a set lore and canon. In James Bond, the canon is that he's a straight white Britt. That's part of the lore. It's the same reason the gender, ethnicity, and sexuality of Indiana Jones has stayed consistent.

If it's any consolation, there was a transwoman Bond Girl (Tula): 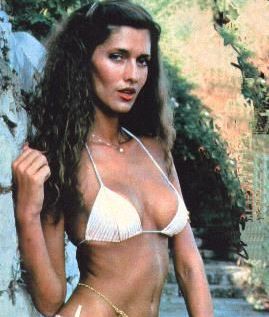 Although, I think my above post is a good intro to Queer Theory and the James Bond franchise.

Well, attraction is in the eye of the beholder.
Especially advertisers know this, and thousands of adverts are based on a Bond-type character, featuring hyper-athletic males and bombastic music, as compared to slightly infantalized women in unbalanced, vulnerable and haphazard poses.
Most of these are aimed at men, and promise physicality; from deodorants to shower gels.
And most have a quality that blurs admiration with attraction.
That is, they can appeal to queer or straight men, and apparently even lesbians.
The most subliminally potent performance of masculinity either way.
Except maybe for military men or sport's stars, which are potent but also less "sophisticated" (some meterosexuals like David Beckham at a stage notwithstanding).

But I see there have been wider discussions on James Bond and Queer Theory.

posted on Jul, 8 2016 @ 02:57 PM
link
In EVERY James Bond movie James Bond is James Bond. It;s not a code name, every movie is about the same character. This nonsense is disgusting.

originally posted by: Abysha
First of all, all fiction has a set lore and canon.

Tell that to the producers of The Dark Tower, not quite sure how Detta Walker is going to call The Gunslinger a honky mofo in this one.

There seem to be two theories on this.
The multi-Bond, and the singular-Bond theories.

But let the real "Bondologists" (to cite Umberto Eco) have a boxing match over this one.

After prayerful pondering, and knowing that all our hearts are deceitfully wicked, who can know them . . . I'll make an adjustment anyway. I don't need to go down such roads at all, for any reason or excuse.

then write a script.

And one of the recent movies put the debate to rest. It's a person, not a code name. Skyfall ended all doubt. In fact the link you sent me to admits as much and comes up with the possibility "they only think they are the same person because 'brainwashed'.

Even if you want to take that foolish leap .. they can't think they are the same person if they are gay. Any way you slice it you can't have a gay Bond.