Black tilt rotor over the uk?

posted on Jul, 8 2016 @ 01:33 AM
link
Driving back from Scotland last night at about 9pm and just coming over the shap on the M6 I noticed a black Tiltrotor aircraft doing large circuits over the m6 and surrounding hills.

I have seen in the press that the UK was considering buying a couple of CV 22's for special ops use but did not think they had bought any yet?

Riat might be why marine 22's are here but thought they where in grey camo...not black!!!

Anybody have any ideas of what else it could have been I.e drone or Augusta Westland prototype's..?!?

And before anybody asks could not get photo as was driving on motorway and nowhere to pull over!!!

In any case, those things just look weird when transitioning. Ain't natural, I say.

originally posted by: Phage
a reply to: Silentvulcan
How dark is it at 9pm?

In any case, those things just look weird when transitioning. Ain't natural, I say.


still light at that time.

posted on Jul, 8 2016 @ 02:03 AM
link
Still quite bright this time of year...sun was out and viewed the aircraft from various angles as it circled over the road at about 2000ft...through various car windows as it went around.

They are very cool aircraft. The grunts in my area are going to be phasing out helos in favor of them to a certain extent. Good news for me, they seem to be quieter.

posted on Jul, 8 2016 @ 02:09 AM
link
Don't forget Farnborough airshow is on next week and it could be part or the flying or static display?

Tilt rotor aircraft are distinct. In 'airplane mode' the props are huge.

posted on Jul, 8 2016 @ 02:22 AM
link
That's how I knew it was a Tiltrotor..caught a brief glimpse of it initially as was driving and it did not look right I.e normal..did 26 years as a aircraft techie in the RAF so know what I am looking at!!

As I have said its just who it belongs to which is confusing me..a reply to: intrptr

As I have said its just who it belongs to which is confusing me...

Two USAF MV-22s, Call signs Knife 72 and Knife 73, were on a training mission on the night of the 7th July. They are based at RAF Mildenhall, Suffolk, England. They were monitored by aviation enthusiasts on an ADS-B exchange and also visually as they flew over Lincolnshire and North Yorkshire.

It will just be a trick of the light that you saw the grey colour scheme as black.

DANG how do you guys vet out unknowns?

I get them flying past my house about a mile away along the cliff edge down here in the south east, never seen a black one tho, only white or grey, you sure it wasn't a grey one? they are quite dark grey and in the evening would be even darker shade of grey.
I'm sure the ones I see fly out of Folkestone with the Gurkha regiment, iv seen them every other day this past few weeks as they are moving out to afghan or Iraq (some place hot and dusty anyways lol)

There are a few air shows this time of year, its been like WW2 outside mine with spitfires practicing and the odd biplane flying over the white cliffs. Any air shows up your way?

posted on Jul, 8 2016 @ 07:00 AM
link
I remember reading the SAS have been using them in London for anti terror drills (can't vouch for the color though).

Don't the SAS have a base in Stirling? - if so maybe they were training.

Perhaps confirming these two statements together might give you your answer.

Scratch that about Stirling - i think thats incorrect.
edit on 8-7-2016 by Loque76 because: incorrect info

I see them a lot while visiting my sister in Norfolk. I have also managed to get some great shots of them when they turn up and buzz around. They usually arrive at dusk, along with the Hercs and Blackhawks and are sometimes still active until after midnight, using the far end of the old Sculthorpe airbase for training.

Here's a shot from last year, taken from my Sisters back garden. 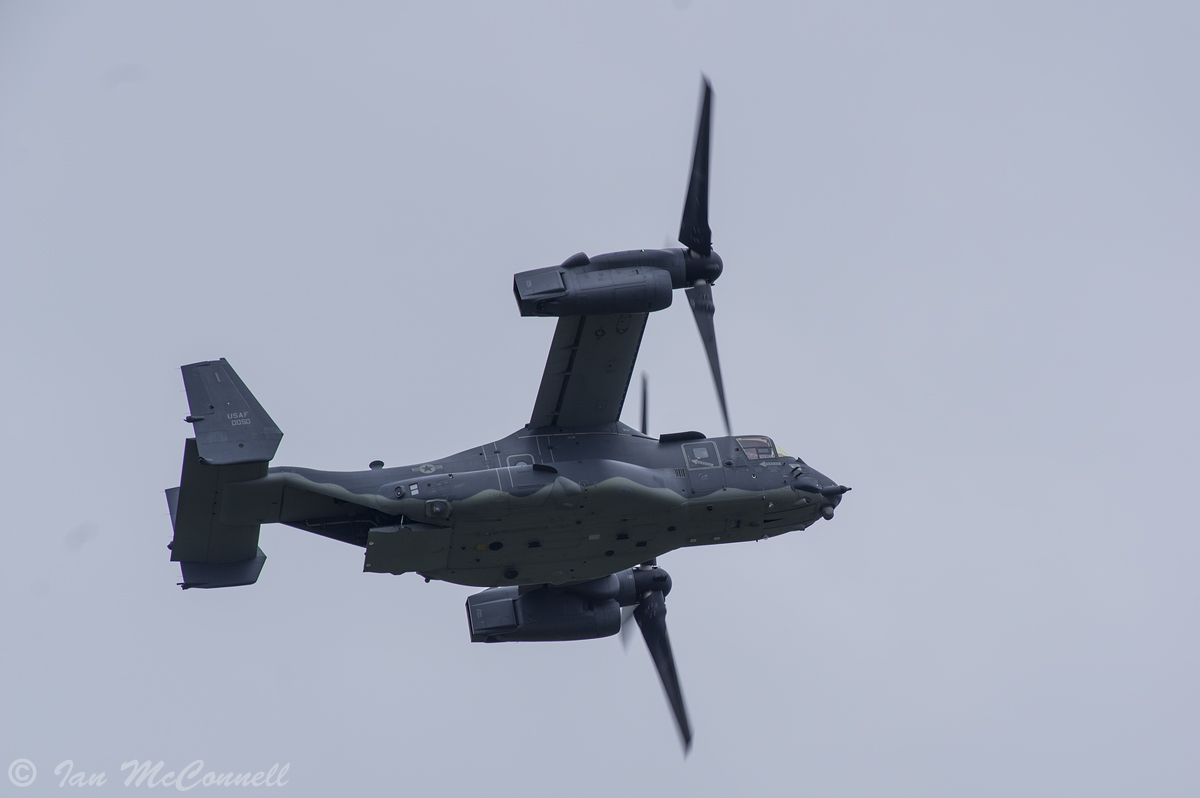 
I have seen in the press that the UK was considering buying a couple of CV 22's for special ops use but did not think they had bought any yet?

Maybe they were taking one for a test drive...

Right now there are no plans for the UK to get any. They've discussed it but the budget doesn't have any money allocated for them in the near future. They'll do joint operations with the US though.

No problem. Thanks for the reply.

The info was from the UK Military Aviation enthusiast forum Fighter Control. You will have to register to get access to the "heads-up" and other interesting threads.