Like I said this will last until elections, is no way to get it under the rug, it will be the fuel of the GOP

Don't know about that.

They are pushing those officer involved shootings hard right now on msm.
edit on 7-7-2016 by neo96 because: (no reason given)

posted on Jul, 7 2016 @ 07:04 PM
link
Just catching up on the news for the day, so what did I miss with this committee besides absolutely nothing.

originally posted by: zazzafrazz
Just catching up on the news for the day, so what did I miss with this committee besides absolutely nothing.

Just after today, all the proven Hillary lies exposed so far are now on the Congressional Record.

And it looks like she will be on the carpet for perjury because it's proven already that she lied to Congress a few months ago.

When and if I see that Clinton's poor choices (retrospectively) about the email server have caused actual damage, I'll review my position. Until then, I will continue to understand that this is political theatre, that the average right-winger in this country is apparently more hypocritical than even I gave them credit for, and I will watch as Clinton's poll numbers climb with each incompetent, faltering attempt to go after her fails utterly (as has EVERY attempt by the Republicants so far.)

I've made it clear on more than one occasion, I'm supporting the Democratic candidate mostly because I'm voting against the apparent Republican one. Perhaps that is a case of "the devil I know" and perhaps not.

That set up backfired bigtime didn't it.

I love that "proven already" line ...

Tried it with Perjury ... CLINTON GETS FREE PRESS FOR THE NEXT 6 MONTHS


originally posted by: Xcathdra
a reply to: neo96

Colin Powell and Condi Rice puts Hillary to shame...they did the same thing and not word from the republicans, no investigation, and no one here at ATS gives a damn about them....this is all a bucket of scrotum sweat to me, and the republicans are more than happy to be dipping their pasty faces in it.


Long time ago. Technology and technological know-how was entirely different back then. When was the Colin Powell thing? 2001 I believe or earlier. And neither of them had a personal SERVER in their home in the basement. Sheesh!

originally posted by: zazzafrazz
Just catching up on the news for the day, so what did I miss with this committee besides absolutely nothing.

Well for starters Comey revealed the FBI investigation ignored several avenues of investigation in regards to Clinton lying which would have proven intent even though its not needed.

I know, I know, that is why I keep saying that this whole affair is not going away anytime soon no matter how much some post that it will.

She is guilty as hell, that is why she is avoiding the questions until one of her money can buy campaign managers write the speech that will make her look like mother Teresa and Einstein, so far, she and her aids are looking sloppy, dirty, devious, corrupted and on top of that claiming that they have no knowledge of law or rules and regulations made them look dumb.

Either way she will not be able to avoid the scrutiny and she has tarnish herself, hard to get off that one.

I sure that her foundation will become a scandal too and on that one her friend Abedin is up to her neck.

The FBI director disagrees. He said they used private email services, like Gmail. They did not have / use a personal private server. They also did not send / receive classified information like Clinton did.
edit on 7-7-2016 by Xcathdra because: (no reason given)

yeah, you go ahead and vote for trump, I'll take my chances with Hillary's "supposed" incompetence, rather than donny's known incompetence

What makes you think that if I were a yank I'd vote for the Trumpet? He's a goose.

If I were a yank, I would be getting drunk on voting day and voting via a viral YouTube video of my drunken shenanigans with a wireless VR helmet, 3 nympho dwarfs and hot wax the likes of which would make PewDiePie blush.

I would write "Bernie Sanders" on the voting machine with a permanent marker, then press enter

Is not about having her and her aids indicted, sanction or in jail, is about the media coverage and her case for the voters to see, that is what is going to damage her, she can look like mother Theresa from now to election day, but her cloud of dirt will be hanging over her head.

Nixon never recuperated from Watergate, Bill will always be known as the president that got caught in the white house, All the scandals of past administration never truly goes away.

She will always be known for Benghazigate, emailgate and her foundatiogate, the latest is next. 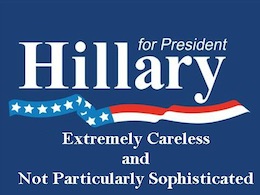 You'd just be a 'undocumented voter.

All are welcome here.

Even I will have considered Sanders the lesser of the three evils if he stay to challenge Hillary, but he already is selling his soul to her.

Well it hasn't "damaged" her so far; she's been leading Trump in the polls for over a year ... and continues to.

Perhaps if the Republican Congress hadn't ran Investigation into the ground with Benghazi, it might have played better with America. As it is ... more trials, for any "reason" isn't going to do anything but irritate.

It seems the voters see this as the political theatre it is ... and as the Congress is at what ... 7% approval, I doubt seeing more of them is going to do anyone but Clinton any good.

Bill Clinton left with an approval rating higher than Ronald Reagan. He got the highest approval rating for any President since Kennedy right after he was Impeached by the House BECAUSE, as usual, Republicans cut off their nose to spite their face in their zeal to GET CLINTON.

They're doing the same thing now. Honestly, I can't wait to see how high her numbers go!

originally posted by: Nikola014
a reply to: Gryphon66

Now it's not the topic if someone lied or not.

Killary BROKE MULTIPLE LAWS! SHE BROKE LAWS. Do I need to spell it for you?

By definition, that makes her a criminal. Deal with it

Hmmm the FBI couldn't show she broke the law but you say otherwise. Good the house oversight committee wants to talk to you.

Watch what happens to Hillary in those polls starting next week.

And wait till the last week of October.

Her numbers will be in the Titanic Zone.


edit on Jul-07-2016 by xuenchen because: had to check email downloads