And the Cops have done it again. Guy told him he had a gun and that he was licensed but cop freaks out and shoots him thinking the guy (who just admitted he was carrying and had a license for said gun) was reaching for his gun or did he forget he asked the guy for his ID. What excuses will come this time?
edit on 7-7-2016 by shredderofsouls because: (no reason given)

I don't see any evidence this man was shot for racial reasons. He was shot by an officer who is an idiot which could (sadly) happen to any of us.

This is tragic and complete BS, but doesn't requite a racial spin.


ETA: I see you edited out your racial spin...good for you.

originally posted by: shredderofsouls
[url=http://www.copblock.org/162603/police-shoot-boyfriend/]
And they have done again. Apparently you are only allowed to be licensed carry if your white. What excuses will come this time?

Can't see the shooting, only the aftermath which is not good, because it's the police officers word vs theirs, and like the court sides with women in custody battles, the court will side with the police officer unless undeniable proof can be produced. Perhaps it is a good idea to start filming in this climate, so good on her. Never the less, the U.S needs to take a serious long hard look in the mirror and ask ourselves if we want to stop preventable deaths/shootings or not, and if we are willing to change our philosophy, and if we do this our society may be a more peaceful society. As others have said, the racial spin isn't helping, many of us are victims of abuse of power, we got to stand together not on racial divides, until we do this we will never fix the underlying issues.


originally posted by: shredderofsouls
[url=http://www.copblock.org/162603/police-shoot-boyfriend/]
And they have done again. Apparently you are only allowed to be licensed carry if your white. What excuses will come this time?


Made it a little clearer.

posted on Jul, 7 2016 @ 12:12 AM
link
We got some weed in the car, not that I am against that bit it kinda kills your chances of your ccw doesn't it? At least if under influence? Either way sketchy as hell if your carrying... And best bet is if not in a duty to inform state to not mention the ccw, from what I have read. Could open you up to a terry stop 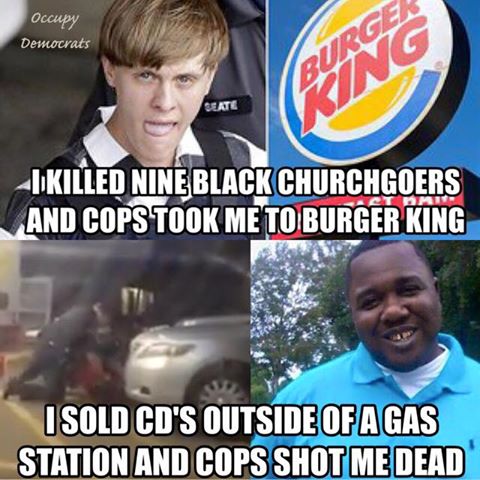 Pull the rap sheet on every white mass murderer, serial killer, rapist, pedophile and all the other weird killings white males commit. Guess what? The white man is still apprehended vs blacks shot and killed.

Facts belong in threads. The fact is they go out of their way to give white criminals the chance to live while blacks most of the time don't get that option.

originally posted by: shredderofsouls
a reply to: JinMI

Good lord. More race baiting? Not to throw a wrench in your narrative, but


Based on that data, Mr. Moskos reported that roughly 49 percent of those killed by officers from May 2013 to April 2015 were white, while 30 percent were black. He also found that 19 percent were Hispanic and 2 percent were Asian and other races.

“If one adjusts for the racial disparity in the homicide rate or the rate at which police are feloniously killed, whites are actually more likely to be killed by police than blacks,” said Mr. Moskos, a former Baltimore cop and author of the book “Cop in the Hood.”

According to statistics maintained by the far-left extremist Guardian newspaper in Britain, more than half of all people killed by US police this year have been white, while only 25 percent have been black.

The Guardian’s statistics are contained in a tally of police killings maintained by that newspaper on a site titled “The Counted.” This was set up by the far-leftist newspaper with the intention of “proving” how “racist” the police in America are—an aim which has now completely backfired in face of the facts.

According to the Guardian’s tally, of the approximately 1001 people killed by police this year in America, 502 were white, 250 were black, 163 were Hispanic/Latino, 18 were Asian/Pacific Islander, 13 were American Indian, and 54 were other/unknown.

I guess I'll assume your next thread will be about protecting the white man from cops.

originally posted by: jaynkeel
We got some weed in the car, not that I am against that bit it kinda kills your chances of your ccw doesn't it? At least if under influence? Either way sketchy as hell if your carrying... And best bet is if not in a duty to inform state to not mention the ccw, from what I have read. Could open you up to a terry stop

We got some weed in the car? Really? I guess it's fine then in la la land to kill people.

BTW where was the weed in the car? I never heard any reference to it, nor does the news report mention it.

But hey, go have a 5'th of bourbon and you're good to go with your ccw.

savemebarry
+27 more
posted on Jul, 7 2016 @ 12:59 AM
link
I love how the cops murdered someone in cold blood after demanding he obey, and he obeyed, and yet no one gives a crap and is content to argue race... or the quality of a post because it has a meme in it.

Well done America, that's the way to do it...

Two things, where you got your story from and everytime there is a factual story about cops killing colored people, you people claim race baiting.

I think you do this because you want the thread to be derailed and forgotten, so that your little bubble can keep existing. Cops kill more colored people than they do whites and those are facts. Anything from the Reich Wing websites just does not cut it.

With respect to the thread, this is very new. There is not a ton of info on this story yet so there's little facts to throw around. If you have more details, do share!

posted on Jul, 7 2016 @ 01:13 AM
link
The taste of the race card is starting to smart in my mouth these days. He was a male, that said he had a gun, reached into maybe the gun pocket and for whatever reason was shot. Why not just say he had a gun,put his hands up and get out of the car to be searched and sorted, or for the people who already say it was racial,be slammed to the ground and have cameras fall of at the right time to cover the cops actions. I don't know,the world is bat # crazy

originally posted by: hiddenNZ
Why not just say he had a gun,put his hands up and get out of the car to be searched and sorted,

Cops get really erratic when they're wound up. And at least where I live, if you've got a CCP they know it when they pull you over. I assume that's likely true everywhere.

SOME cops don't seem to be bothered by that. Others seem to get really freaked out and start behaving oddly. It wouldn't be the first time that a cop knew someone had a concealed weapon, asked for an ID, then shot the guy for reaching for it.

I also recall when we were getting FSO training there was this dash cam video I never saw on Youtube, where the topic of the section was 'giving clear orders in situations where there are multiple LEOs'. There was a guy with a CCP they'd pulled over. One cop went to one window, the other cop went to the other, both pointing firearms at this guy that was obviously not resisting.

The cops spun each other up with body language and voice tones. One cop started shrieking "Don't move" and the other cop was shrieking "Hands up". So the guy put his hands up and Mr Don't Move killed him.

Every time I've been pulled over by a cop that seems to be spinning himself/themselves up, I've been excessively careful to describe everything I'm doing, even though I shouldn't have to. I don't trust their training to be adequate, or the LEOs to have any sort of self-control when they get like that. So if a cop is totally Fifing out, and asks me for my ID, I am going to tell him "I am reaching into my front pants pocket with my right hand to get my ID" so he can wet himself and scream 'don't move' rather than 'bang bang bang'.

The LAST thing I would do is reach down toward the door handle or open the car door to get out.

Good points,wound up with a gun,the law on your side,a guy with a gun,which they had no idea of at the time. Glad I live in the arsehole of the world way down under, I'm sure it will come to a store near us soon though.