Chelsea Manning 'rushed to hospital after trying to take own life'

posted on Jul, 6 2016 @ 12:15 PM
link
I hope this is the right forum for this.
Is it just a coincidence, that Manning tried to kill him/herself, while serving a 35 years sentence for almost the same stuff Hillary did?
Just one day after the FBI let the HRC bomb explode.

Chelsea Manning, the military whistleblower serving a 35 year sentence, has been rushed to hospital after reportedly trying to take her own life.

Was Manning almost another number on the Clinton K List?
What do you folks think?

posted on Jul, 6 2016 @ 12:27 PM
link
Kind of sad whenever i hear about Manning i do not think she had the personality or mindset to deal with a 35 year sentence no wonder she has tried to kill herself.

posted on Jul, 6 2016 @ 12:27 PM
link
Are we allowed to say anything about the link between transgenderism and suicide?

I think that if this has anything to do with the HRC situation, the it probably went something like this:

Chelsea to self, sitting in cell: I am here, because I did what I thought was right, because I believed in the right of the people to be informed about what is going on, because the law was being broken and our people were in the dark. I am here. In this cell, with the morally defunct, the psychopaths, the molesters, the thieves and the nutters. I'm in here with the worst we have, because I did the wrong thing, for the right reasons. And HRC gets to maybe be president for doing the wrong thing for selfish reasons? Peace out people, I'm done, enough of this...now, where did I put my shaving kit?

originally posted by: NthOther
Are we allowed to say anything about the link between transgenderism and suicide?

I guess it is pertinent however I also think we cannot ignore that what she has been through with her military careers is probably a bigger influence over this, how many members of the armed forces attempt suicide

originally posted by: NthOther
Are we allowed to say anything about the link between transgenderism and suicide?

Why not?
But come on, the time, Manning had enough time to take his/her life, why exactly now?

Why is manning connected to Clinton?

I imagine she was upset that HRC got off scott free and he's serving 35 years.


originally posted by: NthOther
Are we allowed to say anything about the link between transgenderism and suicide?

Why not?
But come on, the time, Manning had enough time to take his/her life, why exactly now?

Exactly it may be a fake attempt to bring some thinking into the picture. Make people more aware that people who expose classified stuff are generally prosecuted.

Are we allowed to say anything about the link between transgenderism and suicide?


That would be presumptive. Locked up in supermax, Leavenworth. The worst place for anyone.

In May, her attorneys filed an appeal claiming she acted in the public's interest and that her treatment has been 'unconstitutional' and 'harsh' .

"I don't want to live on this planet anymore"

Well see? There was no bad intent. The should let Manning walk! Just like Hillary!

What do you folks think?

That what most of us all ready know.

That cosmetic surgery does nothing to address the underlying mental health issues.

The guy should have been in therapy, not given and all expenses paid for by us.

Surgery to make him 'look' how he 'feels'.

evolution and science are transphobic, so no

He's probably thinking he's going to be the VP

Why does it matter to you if somebody identifies as male or female?

If she chose to undergo a gender change then good on her, must really take some guts to do what she done, and this is much more than a mental illness there is a biological reason that can be behind this.

Calling this "cosmetic surgery" demonstrates your ignorance towards this topic furthermore this is about her suicide attempt not her gender.

Well that is a stretch and a half....
How can either have an irrational fear of it?

Well see? There was no bad intent. The should let Manning walk! Just like Hillary!


They should give Manning a medal, unlike Hillary.

So far the replies on this illustrate a couple of things:


1 - The blind anger and stupidity towards transgender topics is so strong that it becomes the issue to criticize, prioritized even above charges of national treason.

2 - People on ATS still have no clue what gender dysphoria is, will refuse to learn from current medical authority about the subject, and will seemingly never stop pushing their unsolicited opinion of the topic "down everybody's throats".

I know it's hard for a lot of you but I'm sure you can dig down deep and look at the actual subject, even if one of your conservative triggers presents itself to temp you into barking madly into the dark. Stop it. Seriously, it's dumb. 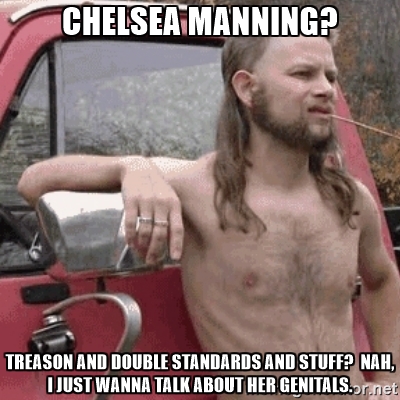 I have to say, in all fairness, that your avatar does induce one to bark at the moon, especially the part under your member details!

In all seriousness though, I think you are spot on. This could have nothing to do with her gender, and everything to do with her situation, which is appalling, and not at all commensurate with the breakage of the law she was guilty of. Chelsea did not do what she did because she sought to profit from it, she did not do it to make her life easier, she did not do it to get ahead of her contemporaries or give herself an advantage or foreknowledge of events. She did what she did because she was dedicated to the idea that the people, who are the executive, the only legitimate power in a nation, had a right to know what was being done in their name.

That's something I believe in vehemently, and I do not believe that the punishment being received is fitting to the crime in this instance, in the least. To have HRC passing go and collecting two hundred crisp dollar bills over behaviour which only differs from Chelsea's in that the public did not benefit from HRCs misdeeds one bit, is probably a far greater trigger in my estimation, for the events which are unfolding now, than any other driver.