The Crone of the Catskills: This Cursed Carving Brings Visits from a Terrifying Paranormal Entity

posted on Jul, 6 2016 @ 10:55 AM
link
Great thread and why I joined ATS.What a story!They should have left it in the cave they found it in.It was there for a good reason I'm sure.

I was thinking the same thing! Leave it alone!

posted on Jul, 6 2016 @ 11:11 AM
link
Freaky! I agree. Leave it alone. A former friend found some old black magic book and started fooling around with it at my apartment once and then I started to see shadows following me around. Some things should never be touched unless you know what you're doing.

posted on Jul, 6 2016 @ 11:15 AM
link
Seriously, just looking at pictures of the thing are disturbing.As I said I'd have never removed it,and if so return it.
If the new owners think they can contain the evil good luck to them.
edit on CDTWedam31161 by TDawg61 because: (no reason given)

I'd love to read the article but I'm too chicken.

posted on Jul, 6 2016 @ 11:37 AM
link
Looks like Voodoo or atleast someone's attempt at Voodoo. When you find something like that, your first thought is, "I'm taking this with me to my home" ? Holy Hand grenades, what a dumb a$$ If I could have chimed in, I would have suggested (common 'effing sense) to PUT IT BACK WHERE HE FOUND IT. assuming this isn't a joke, I couldn't take the whole article, too painful to read.
edit on 6-7-2016 by 191stMIDET because: Typo

posted on Jul, 6 2016 @ 11:40 AM
link
That was a fascinating read, yet I wonder why they think it is a crone, a female? It looks like some kind of voodoo type object to me, or one used to curse another person for whatever reason. Creepy and disturbing object. Great find!

originally posted by: summerdaze
Freaky! I agree. Leave it alone. A former friend found some old black magic book and started fooling around with it at my apartment once and then I started to see shadows following me around. Some things should never be touched unless you know what you're doing.

Amen to that $&%#. The big problem with delving into magic is people do it for the wrong reasons. If you perform ANY KIND of magic ritual whose main goal is anything even remotely negative or non altruistic then your $&%@#$. The rituals I've performed worked, with no ill effects, why? Because I did these things out of love and concern for someone else, and they were things that I could not do on my own. If you wish evil upon someone it will probably work . . . On both parties or just the caster. Kids with matches.

The 'crone' description kind of threw me too. They did claim to see this old woman:

When we were standing in the hallway talking to this thing his dog started barking like crazy outside and when we went to see what was going on, we both thought we saw a woman standing in the dark corner of his living room. She was totally naked, really old, and dripping water, and her eyes sort of glowed in the dark. She was hunched over near his shelves.

Oh wow, it's a fascinating story, followed it through to the end. Good one, thanks!

originally posted by: Night Star
That was a fascinating read, yet I wonder why they think it is a crone, a female? It looks like some kind of voodoo type object to me, or one used to curse another person for whatever reason. Creepy and disturbing object. Great find!


I think they went with crone because of the phenomena surrounding the object, as well as a few other factors in the long article.

Not that I'm buying into the story. The unrestrained human mind is a hell of a lot scarier than any ghost, curse, or so-called demon. I think this story is a mix of fantasy and reality. Objects like this activate our archetypal fears.

posted on Jul, 6 2016 @ 12:49 PM
link
I grew up very near there (Sundown) and have probably been in that cave. Back then, there were a lot of practitioners of the black arts in the area. For some reason, they also had an obsession with spells cast using onions and chimneys. To be blunt, there isn't a lot for kids to do up in that area, so it's more than likely some dabbling in the art to alleviate boredom.

There are also a lot of native American artifacts around there, but this doesn't appear to be that.

I'd say whatever visits the people who removed this from the cave were getting were more than likely self-induced, because at the crux of it all, that's where most of that kind of thing comes from. The crone moved by itself...maybe with the help of a mouse.

This picture looks staged, the rope looks like new cord not old. Guess i am the only one thinking this is faked. 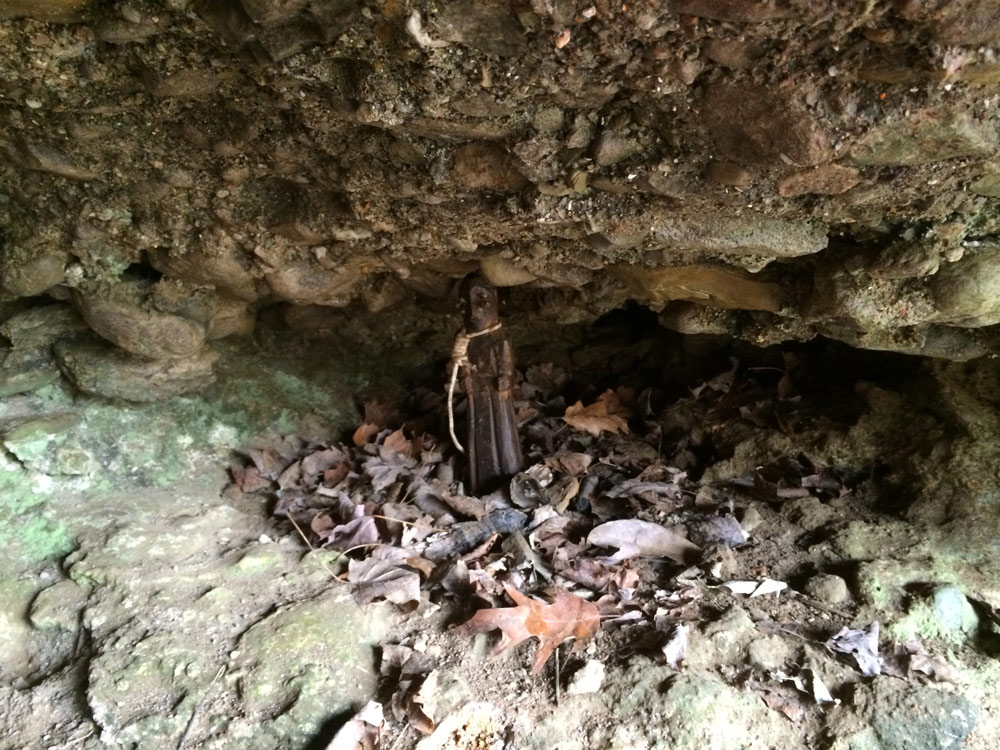 I don't think they ever said it was an "old" artifact in the article.