i came across this the other week and found it very refreshing ,obvisouly not something media wants t let out so quickly.
Nice to see muslims comming together to show their "none" support to terrorist So called muslims.

I live in London and keep up with these sort of things.

They kept this one relatively quiet.
edit on 6-7-2016 by Hazardous1408 because: Autocorrect.

such ashame aswell . i just wantto post positive stuff and feel this fit nicely into this

originally posted by: lSkrewloosel
a reply to: Hazardous1408

such ashame aswell . i just wantto post positive stuff and feel this fit nicely into this

It is a shame, if I'd known I would have been there to take pictures for ATS.

I'm gonna do some research on the group in the article and see if they have any coming up.
edit on 6-7-2016 by Hazardous1408 because: Autocorrect.

Too little, too late. The Muslim community has a lot to answer for. So much of that community tacitly supports or condones terrorism, it's not surprising that there's barely a whisper from them in response to the tidal flood of specific Islamic terror which has been rolling throughout the world for decades, and indeed the depravity & violence at the hands of Islamists which has afflicted the world for more than the last thousand years. 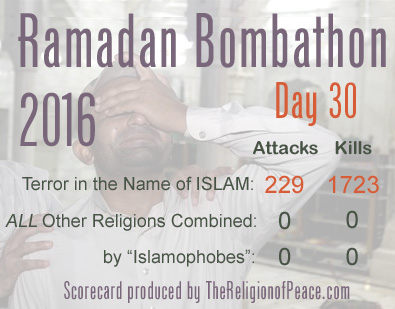 posted on Jul, 6 2016 @ 07:15 AM
link
Its called S.O.P. the heat is on so lets put a show on about how wonderful we are (muslims) but they never report the extreamest living in there communitys.Its all about control,most muslims want to be free but the "community" does not let them
SOP Standard Operating Procedure
edit on 6-7-2016 by imod02 because: (no reason given)

Regardless, it was too little, too late. Of the millions of Muslims in the UK, they could only rustle up a few hundred in this protest.

Sadly, the on-going news is that there is such apathy from Muslims in condemning terrorism, violence and hatred.

posted on Jul, 6 2016 @ 07:45 AM
link
The march would be more impressive if it took place in a country like syria. Brits don't need to be told isis sucks, they already know that.

posted on Jul, 6 2016 @ 08:39 AM
link
a reply to: paraphi
Why do muslims need to come out and demonise there actions, it's pretty apparant they do. Do I have to apologise for anyone who is white, British middle aged, smokers, anyone that plays sports I play, eats similar foods? Does it sound ridiculous the perspective you are taking? I should hope so.

I hate religion but asking peopel to answer for/ give reasons for other people's actions is just plain dumb unfortunately.

originally posted by: GemmyMcGemJew
Why do muslims need to come out and demonise there actions, it's pretty apparant they do.

I think that's the problem, they don't.

yes its not enough for people here and every where, they will have to do more like sacrifice one person every week and only the world would believe them

posted on Jul, 6 2016 @ 12:45 PM
link
a reply to: paraphi
Just to gain a better understanding, all muslims cause violence? Are they responsible for people over 1000 miles away in a different culture? People make generic statements like yours and I don't blame you, you are simply repeating these points without considering what you are saying, like most people that watch mainstream media.

But if you genuinely believe all sects of islam need to come together everytime a terrorist attack is committed (nearly everyday it seems) to say they oppose those actions ( when already stated a million times by normal muslims) they need to do it again?
If that is your genuine view/belief I will hold you accountable for every crime a human being has done through history, assuming you are human.

Where are your anti nazi movements, anti crusade movements . I hold you accountable for the sword being made and killing more throughout history than muslims. Sounds stupid right? Of course it does, because it is. Same as what you have stated. Please think objectively in future.

One feels that you are under-analysing the situation in UK and DAESH on the whole.

posted on Jul, 6 2016 @ 02:26 PM
link
a reply to: paraphi
You realise how that logic is broken, right?
About two weeks ago, before the Brexit vote, there was a vigil held for Jo Cox (Labour MP that was killed). It was attended by less than 200 people from all the many many millions of people in the UK. "Apathetic", isn't it? This means UKers are apathetic in condemning terrorism, violence and hatred, right?

I have no idea where you live. I assume there was some tragedy there in the recent past. Did you go to attend the vigil/protest/rally that went against it? Yes? What about the one before that? And before that? And before that? No? Apathetic, isn't it? I guess you support terrorism, violence and hatred? When was the last time you attended an event to speak out against violence and hatred? Do you attend every one? I guess that means you suppor it?

The ridiculous thing here is that the idea that muslims are somehow responsible for all of it. That they have to constantly condemn and speak out against terrorism instead of people just taking it for granted that a fellow human being would be against wanton violence and hate.

Now if one were to claim muslims were actively aiding and helping terrorists, that would be another matter. But that's totally false as well. The vast majority of extremist muslims caught in the US, for example, are reported by muslims themselves. Heck, there was even a story a couple years back about how the FBI had attempted to plant someone to incite terrorism in some mosque (you know, as the FBI is wont to do, trying to drum up terrorism so that they can then sweep in and pretend to have caught someone), but the other members of the congregation reported the FBI plant to the FBI for spouting extremism!

posted on Jul, 6 2016 @ 02:58 PM
link
a reply to: paraphi
Like I say I don't blame you, I feel you are just repeating the generic uneducated responses found on youtube/internet.

I can't comprehend that anyone with enough grey matter to be able to write would ever come to that conclusion. I'm sorry but it's how I feel.

For these people to attend they are accepting some sort of blame, which no Muslim should have to.

Too little, too late. The Muslim community has a lot to answer for.

The Muslim community is not monolithic, and the community itself owes no apology unless they did something wrong. You judge the guilty for being guilty, not Muslim.

So much of that community tacitly supports or condones terrorism, it's not surprising that there's barely a whisper from them in response to the tidal flood of specific Islamic terror which has been rolling throughout the world for decades,

They are actually shouting it everywhere but western media wont let it on any programs that are watched by mass audience.

The majority of 1.3 billion Muslims despise terrorists just as much as you do. But because of the media you don't know it.

and indeed the depravity & violence at the hands of Islamists which has afflicted the world for more than the last thousand years.

If this is your attitude and you want to remain fair and honest you have to feel the same way about the invasion, occupation and annexation of Palestinian land. They are innocent victims of a foreign invader.
edit on 6-7-2016 by DefeatDeceit888 because: (no reason given)

Well, now that's unnecessary. Feel free to debate if you think I am wrong, by trying to be clever by insulting is not very clever, is it? Use the grey matter that you purport to have.

I have not blamed any Muslim for anything, as you know. I have said that Mulsims don't go out of their way to condemn actions of their fellows. This is a generalisation, I know, but more Muslims loudly protested about a few cartoons than have lifted their voices to condemn the trail of religiously motivated destruction and bloodshed. One is an insult to their religion.

Did you know that the Mossad went around filming Palestinians who they gave gifts to and asked them all to cheer and clap and celebrate?

And that this film was used to show that they were celebrating 9/11?

True story I saw it on a documentary on Showtime I believe. If it was not true it never would have aired, the whole Palestine situation is not the indigenous Palestinians fault for getting invaded and annexed by foreign invaders with no right to that land and refused to settle in any other place even though Uganda (I think, some African country) was going to give them refuge?

And that Samaritan Jews and Ethiopian Jews even the actually Semitic Samaritans and Sephardim who are Israelites and the Ashkenazim are not, but Japhethite converts who are NOT Semitic, all have to convert to Halachic law if they want citizenship and are treated as second class citizens?

The Palestinians are viewed as non human by Israelis.
edit on 7-7-2016 by DefeatDeceit888 because: (no reason given)