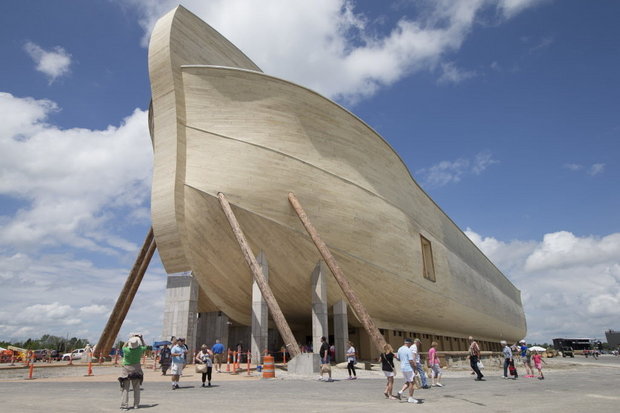 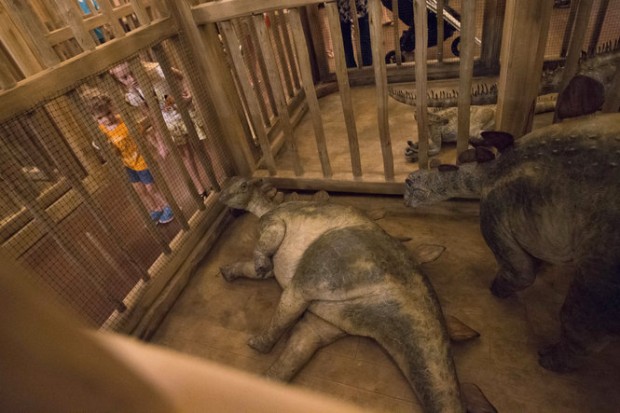 Noah's ark, complete with dinosaurs, ready to open in Kentucky.

WILLIAMSTOWN, Ky. — A 510-foot-long, $100 million Noah's ark attraction built by Christians who say the biblical story really happened is ready to open in Kentucky this week.

Since its announcement in 2010, the ark project has rankled opponents who say the attraction will be detrimental to science education and shouldn't have won state tax incentives.

"I believe this is going to be one of the greatest Christian outreaches of this era in history," said Ken Ham, president of Answers in Genesis, the ministry that built the ark.

The group believes that God created everything about 6,000 years ago — man, dinosaur and everything else — so dinosaurs still would've been around at the time of Noah's flood. Scientists say dinosaurs died out about 65 million years before man appeared.

An ark opponent who leads an atheist group called the Tri-State Freethinkers said the religious theme park will be unlike any other in the nation because of its rejection of science.

"Basically, this boat is a church raising scientifically illiterate children and lying to them about science," said Jim Helton, who lives about a half-hour from the ark.

But that is a lot of money.

Pretty sure Jesus would agree that the money could have been spent on much better things, like feeding and clothing the poor and disabled but what do I know.

Does look kinda epic tho. Wonder if it can float?

So they acknowledge dinosaurs but believe that they existed and were created along with humans, about 6,000 years ago. 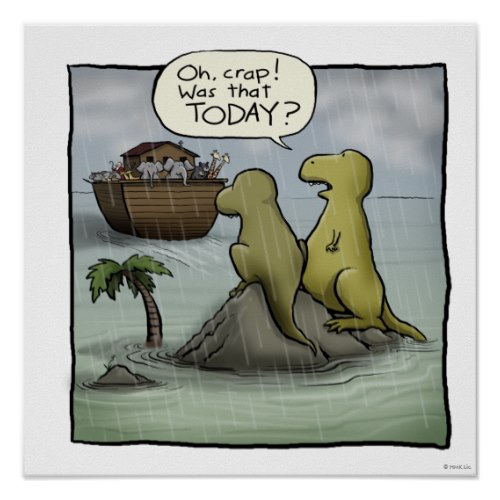 One hundred million dollars! On this theme park attraction?

Wow. what a waste.

you can get a single ticket to the ark or a double ticket that gets you into the ark.......and the creationism museum...also built by this knucklehead

so I heard on KGO radio today that before ,this there was an ark being built in Tennessee, but it was flooded (no joke)
edit on 5-7-2016 by research100 because: dang spelling

So the dinosaurs died... after the flood, now?

Creationists just get dumber and dumber -- every time I hear something about them it's a new issue of absolute stupidity.


A $100 million??? Goddamn! I mean, gosh darnit. But that is a lot of money. Pretty sure Jesus would agree that the money could have been spent on much better things, like feeding and clothing the poor and disabled but what do I know.

Apparently nobody told them about VR.

edit on 5-7-2016 by Ilovemygreatdanes because: (no reason given)

originally posted by: Ilovemygreatdanes
a reply to: gladtobehere
How... But, wha... why? Seriously???

Although I don't see why they would be a feature of the Ark because they were not on it. So is it safe to use the word propaganda?

If you read the Book or Enoch, which I highly doubt over the top Christians like this do, you will find descriptions of cross bred monster like animals and don't need to worry about dinosaurs because it's already a part of the story.

I don't see why they don't just canonize it and put the 100 million towards feeding people and developing diplomatic relations with Islam so we can stop killing each other.

So the dinosaurs died... after the flood, now?


From the looks of things, they may have died out on the boat. Look at that lifeless heap.

That's some grade-A chicken wire Noah's working with there, though.

And hunamity's intelligence drops another notch

Is there a giant Peanut Butter jar dedicated to Chuck Missler as well?

But that is a lot of money.

Pretty sure Jesus would agree that the money could have been spent on much better things, like feeding and clothing the poor and disabled but what do I know.


How are the people who received that $100 million gonna make any money on this little entertainment show then? Or those who will charge entrance fees, drinks, food, and memorabilia (or souvenirs from the souvenir shop).

For to God we are a sweet fragrance of Christ among those who are being saved and among those who are perishing; 16 to the latter ones an odor of death leading to death, to the former ones a fragrance of life leading to life. And who is adequately qualified for these things? 17 We are, for we are not peddlers of* [Or “not commercializing; not making profit from.”] the word of God as many men are, but we speak in all sincerity as sent from God, yes, in the sight of God and in company with Christ.

Unlike certain other people...
Should You Be Charged for Religious Services? Awake!—2010


IN MANY lands, leaders of professed Christian religions and non-Christian religions charge a fee for religious services. These services may include baptisms, weddings, or funerals. The charge can run into hundreds, if not thousands, of dollars.

Some clergy are on government payrolls for performing ceremonial and pastoral duties and for opening daily legislative sessions with prayer. Such functions may be appreciated, and churches have operating expenses to meet. But does the Bible support such customs of charging for religious services or even of making people feel obligated to pay?

“A House of Merchandise”?

When Jesus Christ was on earth, Jewish religious officials and others used religious occasions as opportunities for profit, particularly during Passover. Did Jesus view this practice favorably? No! In fact, the Bible tells us that “he poured out the coins of the money changers and overturned their tables.” He said: “Stop making the house of my Father a house of merchandise!”—John 2:14-16.

A similar situation occurred in the time of the prophet Micah, who lived during the eighth century B.C.E. Israel’s religious leaders, the Bible reports, ‘detested justice,’ and the priests ‘instructed just for a price.’ Yet, at the same time, they professed divine backing, saying: “Is not Jehovah in the midst of us?” (Micah 3:9, 11) But Jehovah God was not in their midst as a supporter. Instead, he detested their conduct and made that abundantly clear through his prophet.

Today many religious leaders resort to the same greedy tactics, thus making their places of worship ‘houses of merchandise.’ In fact, religious organizations as a whole engage in commerce, often doing a booming trade selling icons and countless other forms of religious paraphernalia.—1 John 5:21.
...

Here's another option, volunteer work by motivated people who aren't paid at all, they might try that on the highways near my town for a change, they've been busy for months on the same piece of track, reminds me of the movie "Falling Down" and what Michael Douglas said about it:

Sorry, but Noah's ark looked more like a giant coffin a d rectangular box with three floors in it and a door in its side and a window on top. It didn't need to sail the seven seas it only needed to float until the waters assuaged.

Still though, what the heck.

Jesus would be sad.